ATLANTA METRO – A new format for my weekly AAU Workout Visits, as we dig deep on some of these rosters before, during, and after tournaments throughout the next 5 months.

INTRO: SEBA and Billy LoPresti always put a highly competitive product on the floor, as they’re able to draw from a wide geographical pool and with this crew feature guys from Cobb, Paulding, Henry and Carroll counties to name a few. Their 14U’s worked out before the seniors to-be came on, and we’ll try to keep an eye on them this summer as well as there was shooting, some slick guard play and high IQ amongst that group. 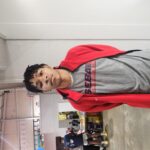 IMPRESSION-MAKERS: Since I saw them workout last week, they put together a nice showing at this past weekend’s The Opening, including a spirited and fun one to finish off Saturday’s schedule vs Team Dickerson Black. One of the headliners, Cal Rich of Southeast Whitfield, is still nursing an injury, so he didn’t work out or play this past weekend, but the 6-7 2023 wing is a name folks are sure to get to know better after a strong season for the Lions. More of a face-up guy than a post, he can score it in a lot of ways and from a lot of ranges. Osborne guard Justin McCarter joins SEBA this year, and his great length and athletic gifts give them a different dynamic for sure, he was really active scoring it during the workout and appears healthy as well. It’s a guard-heavy group for Coach Bo Mason, but that versatility, while perhaps undersized against some teams, can cause all kinds of problems with speed and pressure defense. Interchangeable point guards Javonne Williams of Paulding County, Dre Jackson of Christian Heritage and Dante Harrison of Campbell all combine blistering speed with the rock as well as in-your-grill defense that can disrupt. All 3 shoot it from distance and have little fear getting to the rack, and Jackson is playing up as a 2024 after CHS’ terrific season up in Dalton. A few wild cards who could really make a mark include Landen Pitts of Allatoona, a scary-good athlete who only has one gear and whose energy affects plays all over the floor, while Dutchtown’s Adrian Avery has a natural scoring flair and plays like you’d expect South side guys to go at it with a chip and plenty of moxie. Unsigned 2022 DeCameron Porter is back aboard as well, and at 6-6 and some positional versatility at both ends, that should be a big help in the rotation and for his potential recruitment.

INTRO: Tori Williams and GAA is a program that caught my eye last summer as I traveled the Southeast, and it was their energy and no-quit style that stuck with me. They’ve added size in addition to some of their returnees from 15U having gotten bigger and stronger, and it wouldn’t surprise me to see this organization knock off some big boys along the way. 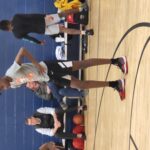 IMPRESSION-MAKERS: There are quite a few guys who can play on this roster, and I’m sure as the spring and summer wears on they some will emerge more, but from the workout 4 names really stood out as guys to keep an eye on in the early going. A big wing and a big post, both from Dutchtown, are absolute 2024’s to keep an eye on, as each has tremendous natural ability and when you look more closely you can see what they’re capable of becoming. 6-6 wing Joah Chappelle was the night’s must-see attraction, a young man with all the tools to be a potential high D1 player, as the lefty showed off some intriguing variety off the bounce with his great stride and lift, and he was knocking them down from 3 and moreso later with a soft touch in the mid-range. Those same strides got him by people with less effort than most and while still a bit wiry he wasn’t shying away from some body to body impacts. Classmate Matthew Hinton is a towering 6-8 already as sophomore with a body that is powerful and yet agile, so as he naturally matures and adds more muscle and weight it will be even harder to deal with. Catching it in close, there aren’t going to be many 16U’s that can keep him from bulling his way to buckets or drawing fouls. He will I think mature as a post presence, as he will need to work hard against good teams to get position and subsequently want the ball more, and that usually comes with time and reps. Byrd Carter of North Oconee played a little of both guard spots, and has a pretty stroke from all spots. He plays like you’d expect from the NOHS program, a lot of guts, more skill than he gets credit for, and good decision-making when he’s in control of the ball. Nasir Smith rounds out the 4, as this highly touted football product from Grayson has a defensive lineman’s streak in him that will not be denied most possessions. But what really surprised was how swift he was for a big guy at around 6-4, and that will help both Chappelle and Hinton as he can clear space or occupy other bigs afraid to leave the big lineman free to catch and power his way in.

INTRO: Looking to make a splash in Year 2 under St. Pius assistant Jonathan Mosley, PSB’s Atlanta chapter has taken the next step with this roster as they have drawn in a fascinating combo of names, with many definitely playing significant roles with their programs this past year but still others having a great chance under Coach Chadwick Hixon (a Centennial assistant) to increase that visibility with their upcoming play. 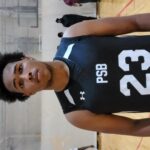 IMPRESSION-MAKERS: Much like SEBA, PSB came out looking good this past weekend after I saw them work out and went 4-0 in The Opening, all of them by double digits and all of them impressive. One will surely need a nickname, but they feature two Blake Wilson’s from ATL-area programs, the 2023 guard who was a breakout for St. Pius this past season, and the Dacula 2024 who has such frightening natural gifts it’s risky as an evaluator to take your eyes off him for long or you could miss something special. Both were terrific this past weekend, Blake from Pius can really shoot it and is an old school mid-range fiend, while Blake from Dacula had several wow moments at, near, or above the rim, and the 6-5 forward playing up will post more of those I’m sure. On the inside, more size for PSB this year with Blake #2 and 6-8 Amir Boyce of WD Mohammed, who made a huge impression on me back at Holiday Hoospgiving and has shown more shooting range to go with a great attitude and really good hands and feet. King’s Ridge 2024 guard Jack Thomas was a major factor in the Knights’ run to the A-Private Final, and at 6-4 with all kinds of enticing offensive variety has the look of a star on the Metro scene. In the solid and sound category, you get 2 new adds, Sebastian Reed of Lakeside, fundamentally sharp and able to score in a bunch of ways while playing either guard spot and heady defense, and joining PSB from the Savannah-area is lightning-quick guard Zyere Edwards, so impressive with Team Intensity last season who’s a defensive swipe artist and a pure speed demon in space. A key sleeper for them who was an eye-opener both in the workout and this weekend at The Opening is Rockdale County’s Chase Hill, a hybrid guard who looks really comfortable in charge of the ball but has a really good mix of strength, consistent shooting, and downhill effectiveness to be a real factor off the ball as well.