Here’s the third group of four to come who created a whole bunch of buzz all weekend in the Sunshine State (in no particular order, GA guys have high schools in parentheses).

Power-packed low-to-the-ground combo guard who played a lot of point and was tough on the penetration but showed nice creativity coming off the wing and a smooth jumper as well, serious on-ball defender as all Lake Worth guys are, the defense and overall lead guard play alone are notable.

The scrap and energy even at 8:30am has been a calling card for Lake Worth Pride 17U all spring, Frenelson Atilus was at the forefront of that as he can shoot it and goes hard at the basket using a stout lower half to focus that scrappy play across the floor#BattleattheBeach pic.twitter.com/8MtGFo8VBj

The unsigned 2022 was a calm and cool customer at the point with a confidence that was evident, showed all the key tools of a solid floor leader, nice range on the jumper combined with good quickness made it tough on defenders to figure his next move.

2022 guard Alex McCray has a calm approach about how he handles the ball for @gamespeedelite Blue, he's got the burst in the tank when needed, but showed off a more crafty approach to the drive and a nice stroke from distance to keep you honest#BattleattheBeach pic.twitter.com/t6FxJXuOLx

2025 playing up 2 levels looked comfortable and skilled despite being the smallest guy out there virtually every game, slick with the ball and an advanced mind on the attack as he pushed pace up the floor or created for his teammates in the halfcourt, a sure-fire name to watch down in FL who has hints of the dynamic 2024 ATL-Metro star and Michigan-signee Christian Anderson Jr. 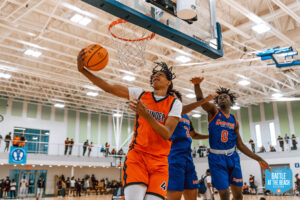 Interesting right out of the gate at 6-7 with good movement, the mobility at both ends attracts eyeballs and when he asserts with a good frame inside it adds to the intrigue, soft jumper out to 15 is yet another facet to like, a ton to work with for a staff that see the natural gifts.

Drawn immediately to the measurables with @TallyThunder 17U forward Quay Randolph, at around 6-8 with good mobility and a soft touch to 15 feet, that's a next level 4-man whose best bball years appear to still be ahead of him#BattleattheBeach pic.twitter.com/PVGbLRhmqg

On a team featuring all guys around 6-0 up to Cineus around 6-5 the hybrid forward at the upper end of that scale impressed with his full-court hustle playing both forward or guard, happily went inside to act as a 4-man against bigger teams and was both strong and clever in close, the versatility extended out to the arc where he showed comfort from distance, one of several solid and fun guys to watch for the always sound Wellington group.

@WellyWolves 17U Select run a bunch of versatile pieces at you between 6-0 and 6-3, on the larger end of that scale resides G/F Shawn Cineus, who morphs between the physical interior banger and smooth jump-shooter seamlessly#BattleattheBeach pic.twitter.com/jFuRZNqJLp 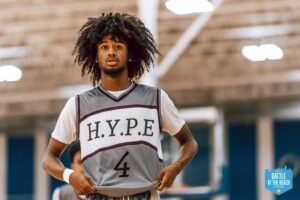 SG David Feeman of Peachtree Ridge has rightfully been garnering a ton of attention for HYPE as he shoots it and shows off his versatility at 6-5, but of late Craft has been showing that Columbia toughness at the point to go with the kind of leadership and crafty scoring you crave at the next level, he really knows how to run a squad with a vocal and high IQ nature that has been a stabilizing force for HYPE as they as usual take on all comers in a gauntlet of a schedule so far.

Late on Sundays the play can get kind of choppy but Sunshine outpaced that with a group of high-flying and energetic athletes who were a ton of fun to watch, in a dunkfest win on Day 3 Fleurinvil was up above the rim and all over the floor affecting shots on defense and cleaning the boards at 6-7, intriguing athletic prospect to potentially hone further when he gets to campus.

Some fun Sunday action at @OTRHoops #BattleattheBeach as Ermil Fleurinvil and a balanced crew of athletes went up above the rim for some high flying antics in a win over Team Tampa, the agile @sunshine_elite 6-6 17U forward finished with 20p@OntheRadarHoops pic.twitter.com/3Adiu2ELkP

Down to just 5 guys late on Sunday Simington still played as hard as he usually does and affects the game either handling it out front or using an often deadly jumper from the wings, there’s a little fire brewing in the belly and it will be fascinating to see if that can be utilized for what on paper is a talented group of returnees in the 2023 and 2024 classes at North Cobb.

Have admired the guts of @NorthCobbBball 2024 guard Liam Simington going back to last summer, going against Jordin Bell of Showtime for @SBT2024 late on a Sunday with just 5 guys he's on the attack and guarding up the highly ranked recruit#BattleattheBeach pic.twitter.com/Z545u2bugD