Many of the top middle school players around the Southeast participated in the Junior Elite 100 Camp. Photo – Ty Freeman

Norcross, Ga – Finding a way to play top talent while also getting quality exposure is a tough proposition for younger players. However, the Junior Elite 100 Camp provided that exact formula at Norcross High School. Here is a look at some of the stars of tomorrow who got the foot in the door in front of OTRHoopsReport.com evaluators.

Brown was the most aggressive player during the first half of the camp.  He was a ball of energy once he secured rebounds and was very successful at jump starting the break himself to the tune of some good results on the other end.  On the defensive end he managed to block his faire share of shots.  Moving laterally was no problem, his quick feet kept ball handlers out of the paint through his first two games of the day.

He has good size for the perimeter, good athleticism and has developed a versatile offensive arsenal. He is very smooth going to the rim, shoots it well from the mid-range area and is a capable finisher in the paint. Parrish is a good rebounder for his position as he uses his big body to carve out space and rebound inside 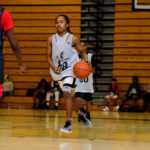 Gamory is extremely ball quick who utilizes outstanding change of speed and direction dribbles to blow by his opponents. He is very difficult to contain in transition when he gets a full head of steam going to the basket. He is a scoring point guard that shoots the ball well on pull up jumpers in transition or off of ball screens

He gets your attention right away with his constant activity. He is always around the action attempting to make a play. He brings great energy every time he takes the floor and impacts the game with hustle plays. In the half court, Evett is a slasher that will also post up when he thinks he has a size advantage over his defender. With continued skill development his game goes to the next level because his effort and intensity are already at a high level. 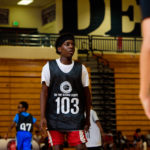 He is a smooth jump shooter with range beyond the stripe and his release is tight. He has a quick first step to the basket and has the ability to get to the rim off the dribble. On the other hand, he is a very unselfish player and is a very good passer, especially in the half court set. Garnett has the size, strength and athletic ability to be a multiple position defender.

Wilson is combination guard that played more off the ball. He is a good athlete and ball handler that likes to use the crossover moves both ways to get to the rim. In the half court, he was pretty much unstoppable as he was able to get down-hill in a hurry to finish around the basket. Defensively, he is a good on ball defender he forced several turnovers throughout the day. 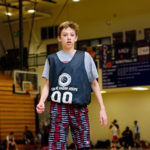 Davidov did a good job of moving without the ball, finding holes in the defense and connecting on open jump shots. He also was capable of sinking shots from the mid-range area and finishing around the basket.

He has an excellent motor which allows him to compete with great energy. He is a good finisher on the break and he attacks the glass on both ends especially offensively. He is a good two or three dribble straight line driver and he is capable of defending multiple positions.

A versatile wing with nice length and speed, he showed good leadership and poise throughout the day. He runs the floor on the break for spot up and penetration kick outs where he is capable of making two or three in a row in a very short period of time.

Drake Downs of Greenville, South Carolina is a rangy right-handler who can stroke jump shots as well as take defenders off the dribble pic.twitter.com/rDlOiG74IJ

McArthur is a true point that has a pass first mentality. He plays under control and makes good decisions with the ball. He pushes the ball in transition and does a great job of always looking to advance the ball down the floor. He can also finish in the open court with excellent touch and body control.

Kaden McArthur @Kcm2324 is a good slasher in the half court & along the baseline where he displayed a good first step & body control.

He is capable of defending both wing positions as well @atlnycbball