Suwanee, Ga – The Blue Collar Basketball Martin Luther King Showcase this weekend at Peachtree Ridge High School. This is a must see event each year that features some of the top programs in the state of Georgia. Here are some of the top performers over the weekend:

One of the hottest guards in the Peach State this season, Forrest exploded for thirty-one points which included (7) three pointers. Forrest is a powerful point guard with a good basketball IQ. He handles the ball with ease and can penetrate and kick or finish through contact. He has a nice pull up in the lane when he draws a second defender.

In the class of 2017 there are not too many guards that can shoot like Estime. Monday afternoon, he was 4-of-4 from three point, showing the ability to score off the catch or dribble in transition or in the half court. He runs the lane where he spots up along the arc looking to read penetration so he can move to the open area to get off his shot. He has a nice stroke from three with good elevation and nice release. 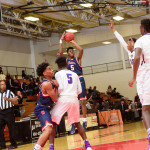 He is a tough guard that constantly applies on the ball pressure, forcing turnovers and capitalizing on the offensive end of the floor. He has a comfortable shooting range to about 18 feet and he has the ability to get to his sweet spots on the floor to get his shot off. Pullins also gets his share of buckets on the break and from the offensive glass where his has shown a good nose for the ball. 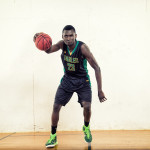 Iyiola has continued his rise as an emerging forward in the class of 2017. He runs the court very well and seems to have an endless amount of energy. He is improving as a scorer on the interior with solid footwork and post moves. He showed the ability to consistently knock down jump shots from the three point line and from the high post. Iyiola plays the game at full speed and always seems to have a hand on the ball around the basket.