The Freshman U Camp featured some of the best prospects in the 2021 class.

Lawrenceville, GA – The inaugural Freshman U Camp provided a platform for many of the state of Georgia top players in the 2021 class. Here are a number of prospects that caught our eye from this weekend’s tournament. 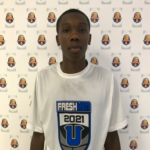 Shirley was one of the most dominant players at the Freshmen U showcase this past Saturday. He has improved his skills tremendously to go along with the great size he already possesses. The most noticeable improvement came from the perimeter as he was able to step out and hit the 3-point jumper comfortably all afternoon. His motor was outstanding from drills to game competition and he owned the paint by grabbing rebounds on both ends and blocking shots. He can put the ball on the floor and make plays around the basket, below and above the rim, which was something he may not have been comfortable doing this time last year. He will look to make an immediate impact for a young Pebblebrook Falcons squad this winter.

McGownens is a scoring machine, he has a quick first step to the basket and can finish with a variety of shots, including a nice runner/floater. If the defense collapses he has the ability to find teammates for easy baskets. He also has the ability to play off the ball and does a good job of finding holes in the defense where he can connect on the deep ball. Our staff has had a chance to watch McGowen’s over the past couple of years and he continues to get better. He is a name to remember nationally in the 2021 class. 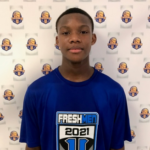 Daniels was one of the smoothest players at Freshmen U, really turning it on during the latter half of the day when games were being conducted. He’s respected and liked by his peers off the court but goes after them with an competitive edge once he steps in between the lines. He has good size and a great overall feel for the game. He can get to the rim off the bounce and finishing with both hands almost comes naturally for this prospect. He impressed with his maturity on the floor and the ability to make plays for others when the time came. He’s no point guard but does possess point guard qualities and with the ability to slash, puts him right there with the best in this 2021 class. 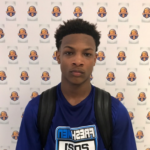 Malone, on this day, continued what was already a successful summer campaign with the Georgia Stars and Norcross High School. He’s everything you’re looking for when searching for a true floor general. He has a very balanced game and knows when to pass the basketball or make plays for himself. He is very patient in pick & roll situations, possessing a great first step to get downhill and the craftiness to convert more times than not at the rim amongst the trees down low. He’s another prospect that has a great feel for the game and is high level because of his ability to make those better around him, regardless of the team.

Noord, who’s already been on the campuses of Auburn and South Florida, showed his promise again at Freshmen U. He’s a lanky wing player that clearly loves the game of basketball and shows with his activity and communication on both ends. He is an effective scorer from 3-point range, proving that ability in the shooting drills early on, and has the size and tenacity to get past his initial defender and make plays once he gets downhill. He will be one to look out for in an competitive region with his Columbia Eagles and annual powerhouse Miller Grove. 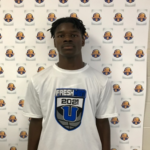 Abidde stood out at Freshmen U as soon as he walked into the gym because of his size and physique. But as games were going, he also showed the ability to put the ball in the basket in a number of ways inside. He is a natural athlete with good feet and looked comfortable on the break for rim run finishes. He also had an effective spin move that allowed him space to lay the ball in the basket also. He is a monster on the glass and double-digit rebounds should be a standard for the 6’6” forward. If he continues to grow and develop inside he could be one to watch for the big men representing the 2021 class. 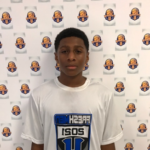 McConnell is a prospect who I believe benefited greatly from the summer AAU season as he made a big impact on a talented Game Elite team. McConnell is one of the more cerebral players I saw over the weekend, using that IQ to his advantage on both ends of the floor. Whether it’s making steals on defense or putting defenders guarding him in a spin cycle for transition buckets, McConnell is someone who will usually make his presence felt. He has good 3-point shooting ability which makes him dangerous from the outside and plays the game the right way, making him a pleasure to play and a headache to play and coach against. 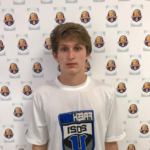 A high-level player in his own right, Garabadian is an elite scorer on all three levels. He is a sniper with a great release from behind the arc and uses an effective shot fake to get defenders up in the air and into the lane to cause more havoc offensively. I liked the way he flew around the court, giving good effort all day on both ends of the floor. He can fill up a box score fairly quickly regardless of the style of play, which makes him valuable already at the High School level.

Cottle, like Daniels, has great size and uses that size to his advantage in multiple ways. There were many prospects at Freshmen U that could put the ball in the basket but Cottle was a prospect that not only scored but impressed with his crisp passes and court awareness in both the half court and open floor. A tenacious defender in his own right, Cottle was another one of those players that you always knew where he was on the floor because he was in the middle of the action on both ends.