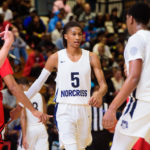 JoJo Toppin and Brandon Boston possess the talent and length on the perimeter to matchup with any team in the country. Toppin, an athletic specimen, plays well above the rim, but what jumped out at me was his much improved jumpshot. The 6-foot-6 UGA signee demonstrated the ability to consistently knock down shots from beyond the arc, as well as in the midrange area. His improved jump shooting paired with his athletic attributes immediately makes him one of the most dangerous wing players in the 2018 class. Sophomore Brandon Boston can flat out shoot the leather off the ball. With a couple inches left in him to grow, the 6-foot-7 five-star prospect will more than likely be courted by every HM Division I program by his senior season. 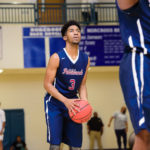 Meadowcreek’s Deavaris Nichols looked to be a solid low-major prospect. Offensively, he took what the opposition gave him, and defensively he put his stamp on the game to keep the Mustangs within striking distance. All in all, lower level programs in need of a feisty lead guard should consider Nichols. Grant Howard is another guard from Pebblebrook that should have more suitors in line for his services. The sweet shooter has a quick trigger and doesn’t need much space to get his shot off. Simply put, Howard has a weapon in his jumper that every successful team needs. I highly recommend coaches to peek in on this kid before season’s end.

Most Intriguing Team I Saw

With McEachern getting most of the national headlines and seemingly everyone’s favorite to bring home the GHSA 7A crown, Norcross is quietly going about its business. Right now, the Blue Devils are a guard oriented team that will rely on their perimeter play to keep them afloat until 6-foot-9 junior forward Issa Muhammad is cleared. However, whenever the versatile big-man enters the fold, Norcross will have everything it needs to win it all.