Atlanta, Georgia– On the Radar’s Super 6 Showcase Tournament played host to some of the best talent in the country for the second live session of July. College coaches such as Avery Johnson (ALA), Bruce Pearl (AU), and Roy Williams (UNC) to name a few flocked to Westminister and Emory Universities gymnasium in hopes of finding their next program changing prospect. 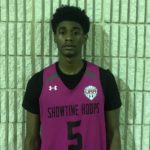 Jaz Farrell plays on a loaded Showtime Hoops 2020 team that is pretty deep at the guards positions. You can find Ferrell on the break dunking on defenders with one or two hands with his exciting athleticism in the open floor. He’s only about 6’2, but has “sneaky bounce”. He has an okay handle and can create for others off the bounce, but is most effective on the break. In the half court, Farrell is a player you can’t give too much space or help off of too much. He keeps defenses honest from deep and can play off the shot fake to get downhill and make a play at the rim. He posted 20 point games several times this summer. When focused, Jaz can really cause problems on both ends of the floor and fill the stats in several categories. 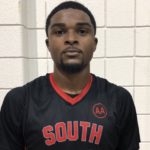 Napper was another key piece for the SC Raptors squad this summer. Napper provided scoring in key moments for the Raptors and was a versatile defender playing against bigger wings for the majority of the games. Napper has a good feel for the game and can find teammates off the bounce for assists. He has a deceptive but effective handle against defenders that gets him to the lane consistently.  Napper found himself at the line quite a bit drawing contact on bigs with his strength in the lane and was able to convert some impressive and-one finishes.

Fraley was another impressive big out of the 2020 class. From Chicago, Fraley is a tough big who doesn’t shy away from contact on either end. He’s long with a good frame at 6’8, and is very mobile with good athletic ability. Fraley can bring energy to the game with monstrous dunks instantly. He’s an active defender who can switch screens and protect the paint against drives altering and blocking shots. Fraley showed he could hit the midrange jumper up to 15 feet and good hands on the block for passes off the help. He’s a defensive anchor with some offensive ability that mid-level coaches will want to see this upcoming season.

Team RWA’s Odom certainly walks on the court and looks like he belongs there. At almost 6’8, Odom is a versatile wing forward who can play a couple of different positions on the floor. He can play a stretch four rebounding and starting the break for easy dunks or slide to wing. Odom knocked down the midrange jumper with consistency, and even hit some 3’s some games. He can make plays for himself off the bounce and get to the rim with his dominant hand finishing in traffic.

Jeremiah Oden had some nice finishes around the basket today, kept his head up in the post able to kick out for 3’s @Blak_Adonis pic.twitter.com/VFFW2FwWSG

Kenny Wilkinson was quite the inside presence for Showtime Ballers in Atlanta this summer. He showed he could do much more than rebound and defend, Wilkinson showed he could be capable scorer in the paint. He plays so hard that he’s not a player you have to draw up plays for, he just finds points. He can carve out space and control the offensive glass and give his team second chance opportunities or score it himself. He is a scoring threat on the screen and roll with his athleticism and good hands in the air. Isnord can convert highlight reel lobs on the break and thunderous jams off the dump-offs in half court. On the defensive end he causes problems for opposing teams with his energy and athleticism. He is a good on ball defender and a more than capable shot blocker. He accumulated several offers, but with some improved offensive capability, high majors will want to see the talented forward from Florida.

Operating under the national radar, he has burst on the scene and established himself as one of the top players in the country. Jones is a guard that is always on the attack. He gets to the rim in transition and finishes in traffic or pull up jumpers. He has a good burst of speed and a terrific first step that allows him to beat defenders off the dribble. He can get into a groove where he can consistently knock down shots from behind the three-point stripe or mid-range area.

’19 Tyrell Jones (@TurboRell) got cooking earlier today, taking full advantage of whatever the defense gave him. He ended with 17 points. @ShowtimeBaller1 pic.twitter.com/4h2rPkoGNH

Boston is an outstanding shooter that can go on some amazing scoring runs with his ability to knock down shots from behind the three-point line. He is a true defense stretcher because he demands the full attention of every defender on the floor. He has become more confident in his ability to handle in the half court and beat defenders off the dribble to get to the rim.

Brandon Boston @bboston_ is a big time shooter who makes shots in bunches.

He can never be left unchecked anywhere within 25 feet of the basket @AOTBasketball @brandonboston5 pic.twitter.com/N9t8VwSTho