Guards make a name for themselves at the Junior Elite 100 Camp.

Atlanta, Ga -There never seems to be a shortage of guards around the country, so the ones that are advanced get scooped up fast. During the action on Saturday there were three point guards that had the full package on display.  They made their teams thrive while also mixing in plenty of scoring opportunities for themselves.  Guards Sutton Smith, Ben Leach, and Ashton Malone all had the goods 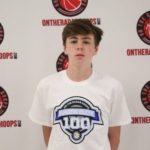 When it came to making plays off the dribble that’s where Sutton Smith came in to play.  Smith has a lot of “White Chocolate” in him, as he danced through the defense with a clever handle.  The lefty was also successful shooting the ball from deep particularly in the corners.  You can obviously tell that Sutton has been a product of some good coaching so far in his young career.  The icing on the cake in his game was his decision making and the way he directed his teammates, always a not so easy task in a setting where players aren’t familiar with each other. 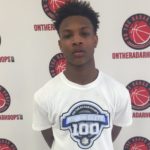 As for Ashton Malone, he was a mixture of both guards with the ability to stop on a dime and elevate while also showing a willingness to get to the basket.  Malone also displayed a high IQ, an aggressive motor, and a good first step that kept defenders on their heels.  Malone was also the best athlete out of the three guards.  At this stage he can spring up and he has good body control when attacking the rim.

Future guards of the Peach State

Rice is a very skilled and complete point guard that does a good job of running his team. He pushes the ball on the break and does a great job of advancing with the pass or dribble with great pace. Rice has the ability to knock down shots off the catch or dribble.

Littelton is a true point guard that has a high IQ and matching skillset. He has a tight handle is a good decision maker and has the ability to run the team and stretch the defense with shooting range to the arc. He can create and makes plays for others as well. 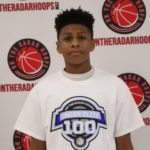 He is a strong point guard that uses his basketball IQ to run the team and set the offense. He pushes the ball with great pace off the dribble or on the advance pass. He hits 3’s off the catch or dribble, stops and pops for mid range pull ups and breaks pressure to make plays for himself or teammates with his excellent passing ability. 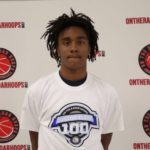 This young lead guard was in attack mode the entire day. He gets the outlet pass and it’s off to the races and would-be defenders are left in the dust. He can slash his way to the rim or knock down the pull-up jump shot. In addition, he advances the ball well in the open court to get his teammates involved early on in transition. 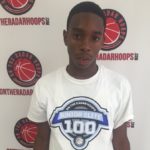 There are some guys who have the knack for getting to the rim. Norman is certainly one of those players. Give him a crack and he’s apt to split the seam and get all the way to the rim. Defenders had a hard time staying in front of Norman throughout the day. Once he gets in the lane he was able to finish through contact or around defenders.

Carter is strong for his size and displays good athletic ability. He can score the ball in transition or in the half court by attacking the rim when he utilizes his strength to score through contact. He can also get his shot off against better defenders. Carter also makes his presence felt on the defensive glass and advances the ball extremely well.

Livsey is a crafty lead guard who makes plays for himself and others, he has a tight handle, good court vision, and pinpoint passing ability. He can drive to score or dish and shows the ability to read the defense and make decisions while in attack mode. He showed the ability to hit jumpers in from the mid-range and behind the arc.