ATLANTA, Georgia– On the Radar’s Super 6 Showcase Tournament played host to some of the best talent in the country for the second live session of July. College coaches such as Avery Johnson (ALA), Bruce Pearl (AU), and Roy Williams (UNC) to name a few flocked to Westminister and Emory Universities gymnasium in hopes of finding their next program changing prospect. 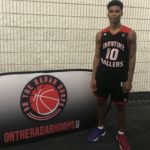 AJ Neal is a 2021 prospect playing up in 17U against top prospects and racking up offers already. Neal is a sniper on the wing at 6’1 and already holds offers from Auburn, Rutgers, UCF, USF, and a host of others. I watched him play this summer and was impressed at how easily he shot the ball. He can get his shot off well behind the line and it looks effortless. AJ doesn’t need much time to get it off and is surprisingly efficient at a young age. I saw him check in games and hit two or three from deep before he could get a good sweat going. Neal will be one of the top guards Florida boasts in the 2021 class that will only get better and bigger with time.

Not the biggest in stature at about 5’7, Cleveland is a guard you can’t underestimate on the floor. He’s lighting quick with a crafty handle that can leave defenders standing still. Cleveland ran with Team RWA from Chicago and ran the show for them from start to finish. He’s a high IQ guard that sees plays develop and doesn’t turn the ball over much. Cleveland is a legitimate scoring threat when he’s aggressive and can attack the rim and put pressure on defenses. You have to respect him on the perimeter because he can shoot the ball from the three or play off the bounce in the midrange area. Cleveland impressed me multiple games with his ability to control games and create buckets for himself or teammates when RWA needed buckets in big games. He picked up offers from NC A&T, Detroit Mercy, & Alcorn State following the live periods. Cleveland is a talented lead guard from Chicago who will be sure to add more this upcoming school season.

Fred Cleveland (2019) @_fredcleveland2 is a quick shifty guard with game! Has a lot of potential and is a quality playmaker! Ran the show all game! This kid is a one man press break! Finished up with 10 points and was dishing out dimes left and right! pic.twitter.com/IV650lTPRW

Black is a versatile forward who can fill the stat sheet on both ends of the floor. He’s got good length and size at 6’7 with long arms which help inside the lane. He is a good rebounder and always near the ball and can start the break and finish above the rim. Black caught the attention of several low to mid-level programs with his athleticism and energy inside blocking shots, rebounding, and dunking.  Black can step out and hit the jumper but most work to make it more consistent. Black will have schools tracking him his senior season, if he can build on his skillset and improve his jumper; he will have a chance to be a good player for someone next Fall.

Drew is a high energy stretch forward at 6’6 for ATL Hoops. Drew was an interesting prospect this summer with his versatility inside. He could guard multiple positions from the wing to the 5 and be effective on both ends of the floor. Inside he is a good rebounder and can push the break and make decisions. He caught some highlight posters over defenders this summer with his athleticism and surprised people with his jump shot at times. He can step out to 15 feet with ease and even hit the 3 ball when on a roll. Drew can be a matchup problem with his quickness off the bounce from the mid-post for bigger slower defenders to keep in front.

Terry Dew @Dew0p1 has shown his versatility this weekend with his ability to make shots from deep and also score around the basket @_ATLHOOPS pic.twitter.com/kVZGOD9v45

Running on an undersized South Carolina Raptors squad, Traye was another lightning bolt guard with heart, girth, and skill that make up for the size differential similar to his running mate  Russell Jones. Traye made himself known as one of the talented guard this spring and summer playing on a tough clever SC Raptors that beat almost everyone in front of them. He plays the point with good understanding for the game and doesn’t give guards any air space on the defensive end. He can bother bigger guards and make it hard for them to initiate the offense and get steals for easy layups. On the offensive end he is a sniper from the 3 who can heat up and make teams pay for leaving him. He’s jet quick with his first step and has good vision in the lane finding bigs or shooters. Traye isn’t intimidated by size and seeks contact on drives to the rim. He hit bigs in the chest frequently and finished some tough layups off the glass with both hands. He was a big part of the success SC Raptors had and that showed with his recent commitment to Army West Point following the live periods. 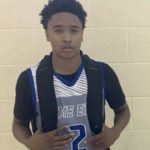 Lowe has good speed and quickness, which makes him an absolute terror in the open court. He attacks the rim with reckless abandon where he can score if needed or find teammates for easy baskets. He can knock down three pointers when his feet are set and he has time. Lowe put up some impressive numbers this summer in the Super 6 Showcase Session II.