Dallas, Tx – The second stop of the ARS Rescue Rooter National Hoopfest was this weekend and made its stop in the lone star state in Dallas, Texas. The Dallas Hoopfest was an all around great event during its two days at Waxahachie High School. The Texas High School basketball culture is real and lived up to the hype this weekend. Even though the Texas programs went an over 1-6 record together, every game was a dogfight and every squad played until the end. Talent was scattered all over the gym, featuring top nationally known prospects like Jaemyn Brakefield, Tyrese Maxey, Jeremiah Robinson-Earl, Jaden Springer, Grant Sherfield, Drew Timme, Hunter Dickinson, and others. Below find out who stood out and who is on the rise. 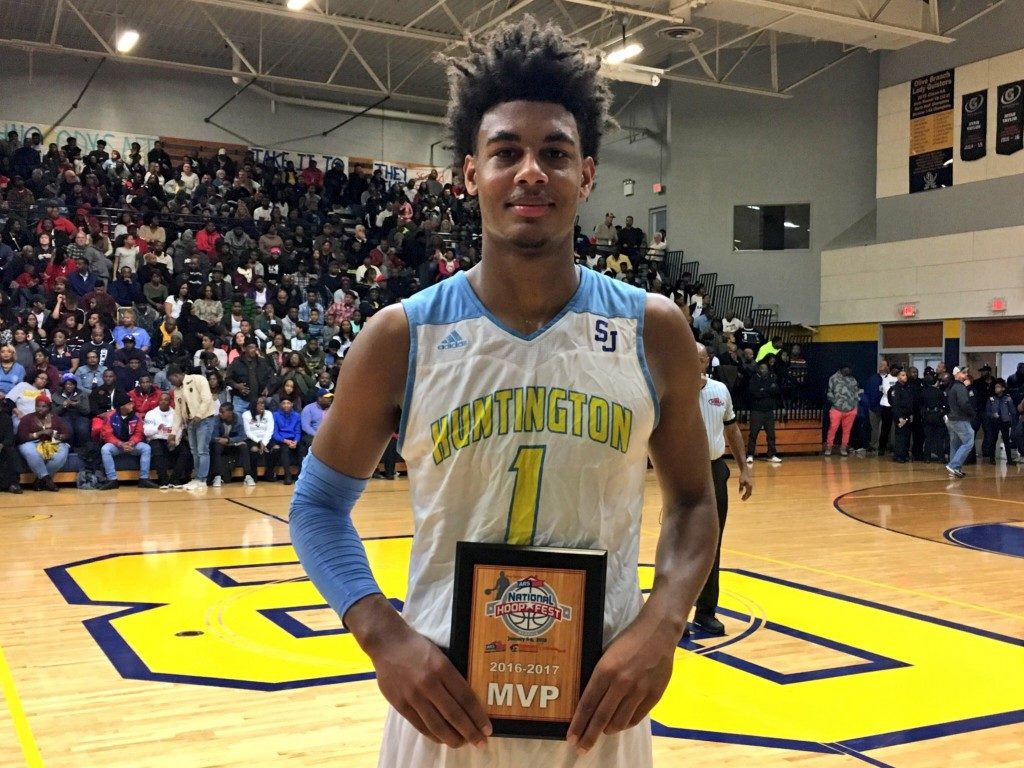 2020 F Jaemyn Brakefield (Huntington Prep, WV)– The 6-foot-8 forward Jaemyn Brakefield was arguably the most valuable player this past weekend in Dallas. Brakefield averaged 18.5 points per game in his two games in Dallas and leading his Huntington Prep (WV) squad to a 2-0 record. Jaemyn was able to show why he is one of the top players in his class and he has improved over the last few months. He is a solid scorer who was able to utilize his size against his opponents sitting at 6-foot-8. Although he needs to work on his jumper, Brakefield was able to do what he does best and did not force any of his shot attempts.

2021 F Duncan Powell (DeSoto, TX)– Here is one of the prospects we should keep an eye on as the season goes along and as we hop into the AAU circuit next spring/summer. Duncan Powell was very impressive in his matchup against powerhouse IMG Academy (FL). Only a sophomore, Duncan is a versatile forward who was able to hold his ground defending two of the top big man in the nation in Armando Bacot and Jeremiah Robinson-Earl of IMG. He has a great feel for the game already for a kid his age and has a high IQ. Powell was able to score around the basket and also able to show his range hitting a couple shots from beyond the arc.

2020 SG Jaden Springer (IMG Academy, FL)– Jaden Springer averaged 17.5 points per game in IMG’s two matchups in Dallas while also going undefeated. Springer shows a lot of comparison to all star two-guard Jimmy Butler. How? Jaden is able to impact the floor on both sides of the ball. A strong two-guard sitting at about 6-foot-4, Spring was able to make his way to the basket using his power and strength and was able to stop on a dime and show us that clean mid range jumper. He was able to run the floor well in transition and is a great finisher around the rim. Jaden helped IMG seal the deal in their Friday night matchup against DeSoto after getting hot in the second half where he scored most of his 17 total points.

After only being up two at the half, IMG Academy (FL) goes 2-0 in Dallas at the @ARSRescueRooter Hoopfest with a win over Waxahachie (TX) 74-59. 2020 SG Jaden Springer with 18 points and Villanova commit Jeremiah Robinson-Earl with 17 and 11 to end the @HoopfestUSA.

Gonzaga signee 2019 F Drew Timme (J.J. Pearce, TX)– Another most valuable player candidate Gonzaga commit Drew Timme was phenomenal on Saturday in J.J. Pearce’s win over powerhouse Simeon (IL). Timme finished with an efficient 17 points, 6 rebounds, 5 assists, and 6 blocks on Saturday. Talk about an old school big, Drew fits that description. The 6-foot-9 forward was able to do it all to lead his team to a 53-52 win. He is incredibly talented for a kid his size and what I believe is most underrated about his skillset is his passing. Drew finished with 5 assists but could have possibly finished with way more. He has great footwork and contains a high IQ for a big man. Mark Few and his Gonzaga program are getting a special player next season. 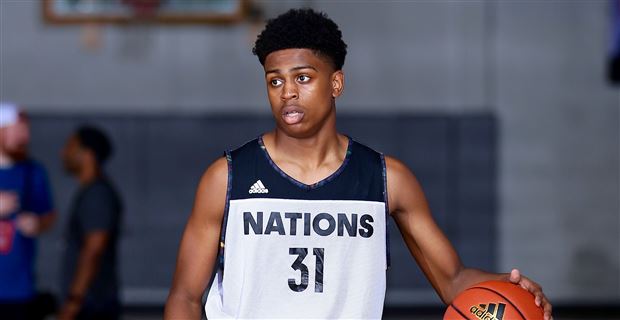 UCLA signee 2019 PG Grant Sherfield (Sunrise Christian, KS)– UCLA is receiving another great guard next season and his name is Grant Sherfield. The 6-foot-2 guard finished with 19 points in their win over South Garland (TX). Sherfield was excellent at penetrating the lane and finishing at the basket all game long. He is a downhill guard and made his way inside with ease on every possession. The Texas native put on a show in his home state with his new Sunrise Christian squad. His matchup against Kentucky commit 2019 SG Tyrese Maxey was without a doubt the best player on player matchup all weekend.

Kentucky signee 2019 SG Tyrese Maxey (South Garland, TX)– Tyrese Maxey was arguably the most exciting player to watch in Dallas this past weekend. The Kentucky signee posted a 25-point and 8-rebound performance in a lost to a very talented Sunrise Christian (KS) team. How can you not love Tyrese Maxey’s game? The 6-foot-3 shooting guard is a prolific scorer who has great range when shooting the rock. Maxey holds a very nice release when shooting the ball and is an incredible shot maker. Besides his shot making skills, the senior guard was also able to create plays and finish through traffic inside. What always standsout the most about Tyrese is his high energy and motive when on the floor. He is a great and vocal leader and has a high chance of being a one-and-done after a season in Lexington next year.

2020 PG AJ Hoggard (Huntington Prep, WV)– AJ Hoggard gets better and better every time you watch him play. As the season rolls along, alongside Brakefield, AJ has been one of the key pieces on this Huntington Prep squad this season. Sitting at 6-foot-3 with a wide body, Hoggard showed he could score from the point guard position in many ways. He was able to utilize his body to keep defenders from reaching in when driving to the cup and also to draw contact. AJ is also solid shooter from the mid range level to the three point line. He does have to work on being a better pure point guard but that should come as he grows. The junior point guard averaged a solid 13.5 points per game while dishing out 5.5 assists per game in Huntington Prep’s two games in Dallas.

2019 SG Antonio Reeves (Simeon, IL)– The Shadow Mountain (AZ) transfer Antonio Reeves made his name known in Dallas this past weekend with powerhouse Simeon (IL) out of Chicago. Antonio is a 6-foot-4 wing with long arms and a slim frame. He was very active on defense in his matchup against Texas’s own JJ Pearce recording five total steals. Reeves was also a threat scoring offensively and was able to finish with a team and game high 21 points. His shooting and efficiency was on point all game long and was able to go 3-4 from three-point range on Saturday. 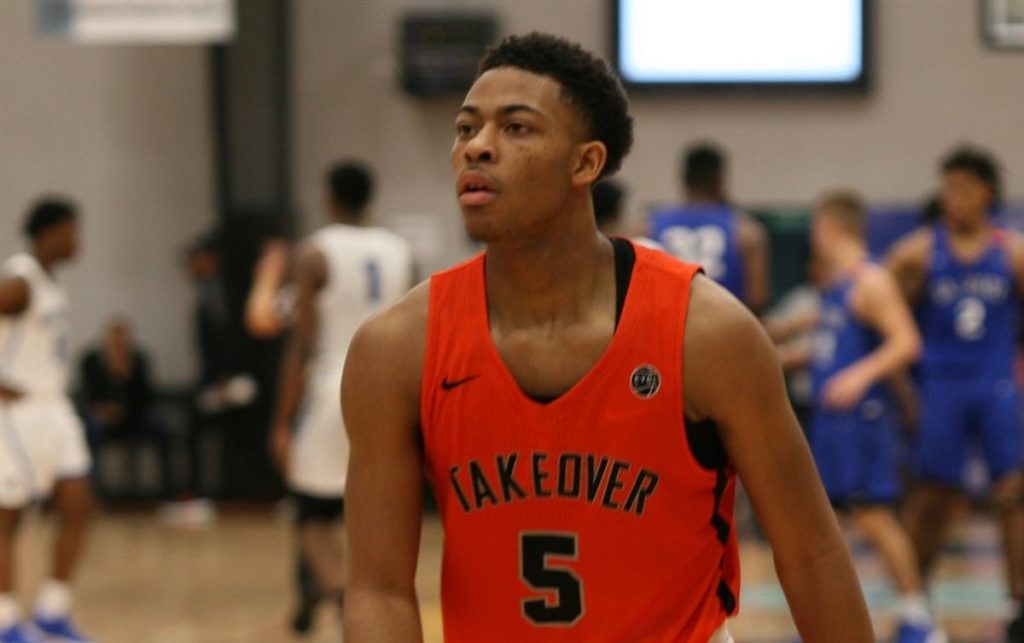 Villanova signee 2019 SG Justin Moore (DeMatha, MD)– Villanova commit Justin Moore did not get off to a good start on Saturday night against one of Texas top programs in Guyer (TX). But the second half was a whole different story for the 6-foot-4 two-guard as he got hot and led his DeMatha squad to a 60-53 victory. Moore finished with 18 points and 5 rebounds in their contest. His shooting mechanics is what always stands out about him. He is an efficient shooter and just an all around smart player. Justin was able to find his rhythm and get to his spots during his run in the second half. With his shooting skills, Justin should be able to fit right in with that Villanova offense.

Michigan signee 2019 F Jalen Wilson (Guyer, TX)– Talk about a kid who fits a college program, Jalen Wilson certainly will match with that Michigan system next year. The 6-foot-7 forward was literally all over the floor in Guyer’s matchup against powerhouse DeMatha (MD). Wilson plays with an extremely high motor and showed high level versatility all game long. Jalen finished with 14 points and 11 rebounds in their lost against DeMatha (MD). Most of his buckets came around the rim and/or in transition. Jalen was able to force his way inside the three-point line and get into his position to score. He was able to play with his back to the basket but also face up his defender and take him off the dribble for a bucket.

2021 SG CJ Noland (Waxahachie, TX)– CJ Noland was definitely the hometown hero on Friday night for the host school Waxahachie (TX). CJ, who is also a dynamic football player that has received a couple offers and interest in football, finished with a monster 30 points and 7 rebounds in his matchup against powerhouse Huntington Prep (WV). The sophomore guard is a big bodied two-guard who was not afraid to get physical with the big men and forwards of Huntington. CJ was able to score inside the paint and also connect on his jumpers from beyond the arc. Noland, if he continues to play basketball, could be one of the young prospects on the rise to keep an eye on.

Other standouts in Dallas: