Let’s dig in on 4 guys from outside the Peach State in Part 3 who’ve vaulted their way onto radar screens everywhere. 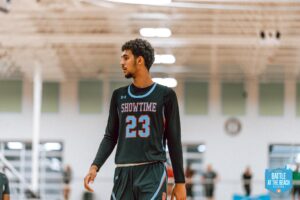 Back in April it was naturally hard to miss Doyle at 6-10 as he took the floor with Showtime and their deep pool of talent, it quickly became apparent there was more than just measurables as the sharpshooter literally fashioned his recruiting profile right before our eyes in a string of terrific shooting performances at OTR events, that production rarely if ever abated as he took on a slew of top programs along the way and continued to impress, truly one of the Spring’s most rapid risers nationally and it shows in the uptick in his interest as schools like Arizona St and Clemson have begun to inquire to go with the below offers. 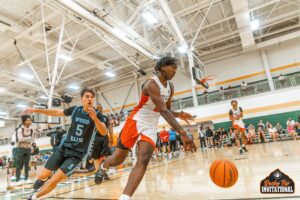 Gatlinburg was his playground as the skilled combo guard was among the most impressive all-around performers there during the Rocky Top Invitational, has a definitive physical style that is backed up by a bit of fiery nastiness that burns in his attack, but with all that comes a level of finesse that has also contributed to his massive jump in recruitment interest nationally as he at 6-5 can be a real burden as a lead guard but has all the moxie and variety off the wing to attack from multiple angles, another treat for evaluation eyes during a great Spring on the OTR circuit, the 5 below are the most recent offers on what is a lengthening list.

Was one half of one of the better head-to-head matches I saw all Spring going up against Gabe Cupps of Midwest Basketball Club at OTR’s Battle at the Beach in Winter Haven, built so similarly to his famous father (former Univ of Miami and Colts RB Edgerrin James Sr) his game has aspects of a downhill running back but has in the tank plenty of on-court savvy and understanding to go with explosive speed to get by people, exciting lift off the deck for a guy 6-1 he has the look and feel of high D1 point man the way he controls the ball and pushes or controls pace, the notable offer list speaks for itself and there’s more. 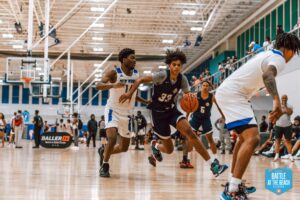 Had the great pleasure to interview Newell back during the fall http://ontheradarhoops.com/radar-contact-south-floridas-asa-newell/ and after watching clips of him prior it was easy to see that the kind of play he’d put on display with OTR in the Spring was going to garner him all sorts of attention, it’s come to fruition as not only is he headed to Montverde Academy for 2 more HS-seasons but the agile forward has seen interest swell even before that announcement, the way he can move & defend near the basket together with devastating multi-level scoring ability makes him one of the Southeast’s most rapid stock-risers and a killer get for any program lucky enough to eventually find the golden ticket.