MCDONOUGH, GA – The guys at Pro Movement consistently put on a strong product in a crowded Spring and Fall Showcase season, and they were down at McDonough HS again for the Fall ’22 version.

Jarrett Christian and company generally attract a fascinating mix of guys from the North Metro, the south side of ATL, and middle and south GA.

Here’s Part 1 of guys who were hard to miss:

After catching eyeballs at DT Academy 2 weeks back Aleem was back at it and looking the part of the developing star he has teased for a couple of years now, his rep as an exciting high flier has been well documented in camp settings but augmenting the startling athleticism with some gritty and solid perimeter fundamentals has been a question, in stations his jump shot looked better than I’d ever seen it as it was smooth off the release as he really elevates, always liked his ability to handle the ball some and be at the top of the offense and not just roam for alley-oops or make a 2-dribble explosion drive by an inferior athlete, plays with a lot of confidence in spurts that I like also and as he continues to translate natural gifts into diehard fundamental basketball he takes a huge step in his recruiting profile. 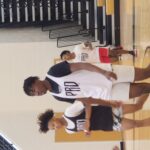 Been looking forward to catching King in a Showcase setting after watching his Georgia Jayhawks mate Jason Isaac Jr terrorize folks all over town the last month or so, King is busting with such potential and while he now kind of falls into that middle ground of positions between a 3 and 4 as he improves his jump shooting from 15+ the pure physicality of how he muscles you in his power forward-sense makes him a very attractive small forward prospect, for right now he can be a bull in close to the cup with swift moves and great feet to spin around you or blow by with a couple of power dribbles, his work this spring and summer with the Jayhawks was bordering on a higher level than he got credit for and he’s sure to draw more eyeballs for what should be a sneaky good UGHS team. 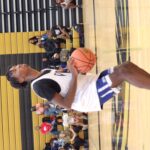 Sleek and efficient Harris was a name that emerged from the day, it was first with a few pretty finishes off of transition that caught eyes but later it was the confident stroke from long distance that was too sharp to ignore, that sleekness is on a lean frame but the way he can get off the deck and glide up the floor meant he avoided more contact than he faced, we’ve consistently seen how underratedly good Columbus-area ball is and Harris fits that mold of a guy who can get to the next level with his good length and gamut of wing skills. 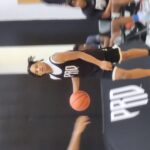 So accustomed am I to seeing Lawrence with his Atlanta Select and/or Lithonia mates it was refreshing to see him out on his own and showing off the floor leader aspect of his game more succinctly, showed excellent control of tempo in Showcase games that can get out of hand and look sloppy, head is up and scanning and he generally finds the right spot for the ball more often than not, don’t sleep on his shooting touch or quickness as a penetrator, on a guard-heavy Bulldogs team it’ll seemingly be a different guy every night but Lawrence will be key pulling the strings. 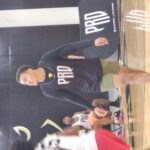 Perhaps it’s my appreciation for truly pure PG-play that draws me of late to the work of Johnson, he’s been standing out in a slew of recent Showcases and showing off his skills before a broad audience, that group of eyes should increase as he takes the floor with the powerhouse Bulldogs and I love how his game fits their style of play in East Point, he just appears to be born with the instincts of pure point man as he utilizes speed with the ball to go with top-level awareness and an ability to hurt you offensively from every level, rapidly rising to one of my favs at the position in the class. 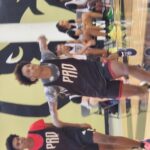 So quietly and usually efficient does Gatlin go about his business that had I not known his game well from catching him the last 2 years he might slip through the evaluating cracks, but even those who don’t know him as well as I do were pleased with what they saw Saturday as he continues to improve across the board after starting his career as mostly an ace defender and emerging lead guard, the jumper has been a weapon and is further on the come looking sturdy and confident while as he has matured physically his work getting at the basket is more assertive, look for him to see important minutes for the Rams as he’s come too far to slip through the cracks any longer.