With Norcross 2023 guard London Johnson, it was apparent from the moment he officially arrived in Georgia from North Carolina at the end of the summer of 2020 that he was going to be special, but finding a home both for basketball and his family’s comfort was a careful, thoughtful process between he, his dad LeVar, and the rest of the Johnson clan.

The result is a basketball future bright with possibilities and a recruiting profile that has exploded off the back of those gifts, with more than 20 D1 offers and a national profile that has him climbing rankings boards at a frenetic pace.

The full “Press Breaker” Podcast episode of my sitdown with him can be heard below, on your phone in the free Podbean app, or on Spotify or Amazon Music as well!

Here’s an insider snapshot from my talk with Johnson, as we follow his decision to move southward and some of the challenges he has faced to get to this point as one of the top 2023 guards in the country:

On his move from North Carolina to Georgia, right as the Covid-19 pandemic was taking hold, and trying to stay focused on keeping sharp on the floor:

“I moved here (Georgia) back at the end of my freshman year, and we moved right during Covid so it was a big move, we ended up fitting in good because my Dad has some friends that had connections in Atlanta for different people to get training with and go to school, so we found different connections there and gyms to get into. There was a lot going on, checking the news and seeing people dying, but there weren’t a lot of gyms to get into (in North Carolina). But when I came to Atlanta there were a bunch of gyms, I hadn’t seen anything like it.”

With a chance to keep his game sharp, and as circuits and facilities scrambled to put together a summer season in 2020 amidst so much national uncertainty, Johnson and his family made the choice to play with North Carolina-based AAU power Team Curry, a decision that made sense on paper at the time and certainly didn’t hurt his exposure as they came down to play at LakePoint among others:

“I was playing with Team Curry when we were uncertain about if we were going to move to Atlanta or not, my Dad told me to try out for a couple of teams and Team Curry seemed like the best fit, so I ended up playing with them until it was official we were moving to Atlanta.”

After that abbreviated grassroots campaign that still saw Johnson post some big numbers and impressive performances with Team Curry, he still needed to choose a school and community to call home once they decided Atlanta was it. Three schools were initially on their radar – Norcross, McEachern and Pace – and those certainly represent some of the top basketball powers in the Metro. But others were also making a play:

“At first we were getting a bunch of calls from a lot of schools, Grayson, all the public schools around, Hillgrove. I was hearing voices, people telling me those schools already had main guys, I wouldn’t get a lot of playing time. So we narrowed it down to Norcross, McEachern and Pace, and then out of those 3 we decided on Norcross.”

Some of the reasons for that choice can be found in my podcast interview, it was more than just basketball as Johnson’s sister and her future schooling played heavily into where they were going to settle as a family.

The decision on Norcross now made, he was set to enter his sophomore season with a Blue Devils team and program that is always stacked with players. With 26 wins and a 7A Final 8 appearance in the rearview mirror, and the likes of JT Thor, Quincy Ademokoya and Kevon Eskridge having moved on, there was still plenty of talent on hand as practice loomed for the ’20-21 season, and fitting into a new school is always tough.

“We had some big players coming back in, but they weren’t really at my particular position. We had Jaden Harris (last year) but he was more of a scoring guard than a point. So Coach (Jesse McMillan) would like it if I came to the 1, who could facilitate and also score at the same time.”

That ’20-21 group posted 21 wins and a 2nd place Region finish, so while it may not have resulted in the type of deep 7A playoff run Norcross is accustomed to, Johnson came out of the season with increased confidence and a better handle on his place here in his new home.

It didn’t make sense to go back to Team Curry for 2021, and after being courted by all the major AAU players in town, he settled on 3SSB power program Game Elite:

“I decided to stick with Game Elite because I was already local in Atlanta (by then), and mainly because my Dad had a connection with (Game Elite).”

Working out with the 17U’s and the likes of Scoot Henderson and Chase Cormier while being courted for his services also played a huge role in his deciding on Game Elite, and he actually started playing up at the Tipoff Classic in April (and played with the 16U’s also that weekend) before settling down after that tournament more notably with his own age group.

After a strong spring now focused with Game Elite 16U, we fast forward to June, where Live Period Team Camps were back and the month was busy and exciting around town. Returning to the floor with his Blue Devil mates – Jahki Howard (now departed), Samarion Bond, Mier Panoam, Jerry Deng, Aiden Sherrell – it’s always interesting to hear from players how they transition from one set of voices on the grassroots level back to their high school staffs.

“It was different, because I’d never done that, switching over so fast, not a lot of practice in between, so when we switched it was kind of rusty. I’m glad we played in a few tournaments before the coaches came out, we played at Kennesaw St, that gave us a chance to get out chemistry back together. And when we got to LakePoint (for the GBCA Live event), it was good connection, good chemistry.”

Team Camps concluded, in finishing out another strong AAU summer leading to his junior year, we spoke a little about some of the things he’s been working on:

“My main focus right now is getting stronger. Also maintaining my shot, because I hear a lot of things about lifting weights can throw off your jump shot. So stay(ing) consistent with my jump shot but also gain(ing) a lot of weight.”

The Blue Devils aren’t playing in any fall leagues, but the guys have been keeping sharp working out at the school and participating in some Showcases. There are high hopes for this team yet again off Spalding Drive (even with the recent departure of 2024 star Jahki Howard, as Johnson and I spoke before Howard announced):

“Everybody thinks it’ll be a real big season. From what we were doing in Live Periods, we were smacking the teams that other big teams around here were having trouble with. So everybody was really excited about that.”

Something of a known commodity before even coming to Atlanta as a youngster, and now entering top 30 territory in the 2023 class nationally (by 247 Sports recently), after a big last 16 months the recruitment has been consistent with a player of that level. He had 21 D1 offers already when I sat down with him a few weeks back, he’s added Wake Forest, North Carolina, USC and Louisville most recently.

With the top programs in the country sending out offers like they were candy bars at Halloween, we can expect this dymanic prospect will have his choice from among the top courtiers. and with the backing of a great family, a humble head on his shoulders, and a real handle on his path, this should be a fun road to follow for the talented guard and his sure-to-be entertaining Norcross teammates. 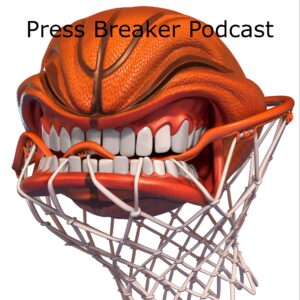