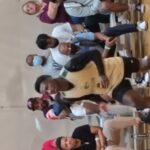 It’s been quite a last 2 months in Loganville, as the roster defections that have become all too common have changed the look of the green and gold, yet there hasn’t been a ton of concerned wind blowing from Ram Country as there is still plenty in the cupboard for Coach Geoffrey Pierce. Just in the last month and change, Robert Cowherd, Abduhl Diaby and Ahmad Clark all moved on, and while still a Ram recent Clemson-commit Chauncey Wiggins was not in uniform at the Jamboree, so younger players filled the void and looked awfully good doing it.  Set to be a starter/rotational player anyway, 2023 forward Chad Moodie has continued his rise and development, and you have to love the combo of finesse and physicality he brings to a frontcourt at a stout 6-8.  Playing alongside up-and-coming 6-7 2025 big man Amir Taylor, it was a snapshot of next year’s frontcourt as well, and one folks at Grayson should be excited about beyond ’21-22. Guard Gicarri Harris has been on a star trajectory for the last year, and looking bigger and stronger nothing appears to have slowed that ascent for the 2024 stud, as he has always had excellent shooting range and with that improved frame at 6-4 is taking it hard at the basket. The Rams are not without key veterans augmenting Wiggins, as senior-transfer guard Caleb Blackwell was his normal smooth and speedy self, and he brings great poise as a ballhandler and floor leader. Combining with him is NC A&T signee Tyrese Elliott, who burst onto the GA-scene from Alabama last summer and hasn’t disappointed in making his mark quickly as a combo guard who at 6-3 can give you a lot of versatility as a savvy scorer and experienced defender.

OUTLOOK: With a frontcourt of Wiggins, Moodie and an advanced freshman in Taylor, this is still very much a top 7A contender, but the depth of veterans took a definite hit, and it appears the guards once again will hold the key for the Rams, that said a trio of Elliott, Blackwell and Harris is an awfully talented and driven core to run with. 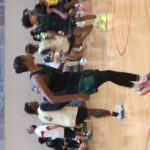 It’s almost seemed to me I’ve become something of a Walnut Grove beat reporter going back to June, as in my multitude of travels I found myself running straight into the Warriors everywhere I went. They were busy getting better, thus I’ve gotten to know this roster well, and with a close win over their neighbors to the north Grayson at the Jamboree they once again showed they are a 5A contender to watch. It’s the depth that immediately shows itself, and those options can produce a bunch of lineup versions that can hurt you for Coach William Witherspoon. Seniors will still be the key despite some nice young talent out in Loganville, as forwards Shawn Walker and Valdy Zephir and guards DeMyron Williams and John Knott provide a really sound foundational base for that potential run. Walker is the emotional core, at 6-5 he can mix it up inside or pull bigs out and put it on the deck. Zephir comes in from Central Gwinnett for his last year and at 6-9 is a load who can move plenty well, gobbles up rebounds and affects shots near the rim. Knott is your feisty and heady floor leader, and had the winning bucket vs the Rams, while Williams has shown going back to June Team Camps that he is the deadeye shooter needed in a lineup like this to keep defenses honest and deliver daggers in big moments.

OUTLOOK: 5A is no joke with defending champs Eagle’s Landing returning nearly intact and finalist Tri-Cities still packed with talent, and keep a watch on sleeper picks Chapel Hill, St. Pius and Blessed Trinity as well, so the road will not be easy, but navigating and capturing a gettable Region 8-5A with this kind of veteran leadership could position themselves well come Bracket time. 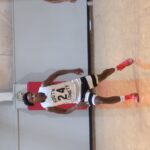 Playing in no-joke Region 4-7A will provide this interesting bunch with plenty of opportunities to make a breakout move, and the talent and veteran savvy appears to be on hand to make some of those a reality. It’s a guard-driven bunch, with underrated size and athleti=cism on the frontline, headlined by senior guards Maalik Leitch and Marquin Thompson and juniors Jett Horne and Jacob Washington. There’s a lot of minutes logged by these backcourt mates the last few seasons, and it shows in how they control the pace and see opportunities on the push. Leitch had a strong summer with Norcross Heat and has really emerged as a big-time threat as an attacking PG while affirming his status as one of the best on-ball defenders in the Metro, while Horne in particular has wowed me since I first saw him as a freshman, and has matured in both his game and frame since then. The underrated size comes in the form of 6-5 senior Kamren Heathington, whose made a notable move onto radars of late with some exciting ability both in close and off the break (nearly blew out the new AC-system with a full-court take and slam), as well as senior Michael Carter and junior Ansar Osman, active guys who go 6-5 or bigger.

OUTLOOK: The regular season slate will be a serious test in this Region, but they aren’t short of pieces that can give every single one of those opponents all they can handle, and if they can navigate that into a slot in the 7A Bracket, with the kind of experience they have and lineup versatility this Comet bunch is not a team that will go quietly.