Will Kolker made play after play over the weekend at The Opening. Photo – Stan Johnson

Powder Springs, Georgia.– The Opening has provided the stage for the top teams to compete against each other to kick off the travel season. The two-day weekend provided many local observers as well as fans from around the nation a glimpse of some of the top talent in the southeast. Here is a look at some of the players that took advantage of the stage.

A raw run and jump athlete right now, but Myrick’s best basketball is a head of him once he gets introduced to a strength and conditioning program.  He was at his best in transition and excelling at second chance points due to him being a pretty good offensive rebounder.  He’s an aggressive finisher in the paint, although he didn’t knock down a ton of shots from the perimeter over the weekend his stroke isn’t bad at all when his feet are set.  Most recently he received an offer from Northern Illinois.

Thompson’s second jump off the floor was everything, one of the quickest i have seen in awhile.  The Homewood High forward did all of his damage in the paint as he played with a relentless motor that lead him to multiple blocked shot games and rebounds in traffic.  Once Thompson gathered a rebound or a block his next task was to run straight down the lane where he made himself available for teammates to find him.  His game was simple, but very effective.

This lefty wing has the sauce to see his recruitment step up a level as the spring and summer unfolds.  Playing with an Atlanta Timberwolves team that really knows how to share the ball you really got a chance to see Hadaway in some different roles throughout the weekend.  He was a facilitator, a scorer, a rebounder, and a decoy.  He plays the game with energy and a smile.  He’s deceptively quick, knows how to use angles, and he showed his smarts by adjusting to how defenses played him each game.  As a catch and shoot guy he didn’t hesitate from the perimeter, nor did he give it a second thought to climb a defender if he caught him under the rim.

Aidan Hadaway is an intriguing talent due to his length and shooting touch.

Hadaway was one of the biggest stock risers from The Opening.

Clowney was easily the best big that we saw over the weekend, and more than likely the best prospect.  The Dorman High(SC) product is coming into his own as he was close to a double double in each outing.  Athletic and long, he is becoming more than a ferocious dunker.  The big man showed patients on the block, as he often posted kicked it out, and reposted before making a solid move on the block.  He is agile enough to move his feet against smaller defenders, and he challenged everything at the rim before changes ends quickly.  Clowney also stretched the defense at times, but definitely didn’t fall in love with shooting the deep ball.  A sure-fire high major target, the question will be can he assert himself as a go to guy offensively when it’s all said and done. 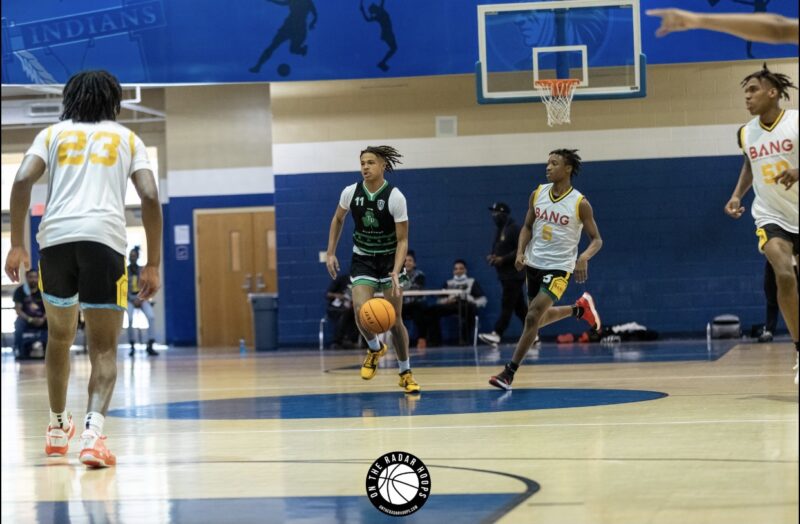 Burns plays with a tremendous amount of old school poise. He’s got a balanced way and approach to his game. He rarely forces and makes sound decisions, he attacked the defense in the half court where he found teammates around the basket for easy buckets but also got out in transition to finish plays. Burns was a menace on the defensive end of the floor and has the ability to defend multiple positions on the perimeter.

He’s evolving from elite athlete into prime-time scorer. Bell continues to grow and his game expands. He’s capable of moving into his shot from deep range and hitting pull-ups. With a path to the rim he’s going to get into attack mode and use exceptional athleticism and body control to finish. He’s a big time scoring option. Finishes going left or right and everything is at the rim.

2022 Zach Bell @zach_bell5 cuts in from the wing and flushes the and-1 hammer for Team Dickerson. He’s been hard to keep out of the lane off the dribble. @TeamDickerson1

Thornton is a solid point guard who can both score and distribute. He has good quickness and speed with the ball. He is super crafty in the paint and he is good at finding teammates cutting to the basket. He can also score in the mid-range area where he needs very little space to pull-up and has a dependable floater. He is a good defender who can play passing lanes well.

Kolker is a skilled guard with a lethal jump shot. He has an effortless stroke that is virtually automatic when in rhythm from anywhere around the three-point stripe. He is equally effective shooting off the catch or the dribble, and can also find teammates cutting to the basket.  Kolker had multiple games where he connected on (3) plus three-pointers.