Team Georgia Magic center Aaron Jones was tabbed a standout from The Opening.

Atlanta, Georgia— The 2021 school ball season is officially in the books and On the Radar’s The Opening Showcase jumpstarted travel ball play for many programs around the country. With over 150 teams in attendance, here are a couple quick hitter notes from our notepad.

It’s surprising this class of 2021 lead guard is still available. Ballard got it done on every level offensively and was equally effective on the defensive side. His speed, court-vision, scoring prowess, IQ, and competitive edge will bring immediate value to college programs looking to bolster their backcourt.

Being a leader takes poise, control amd focus. @Cballard0 exemplified all these qualities for the @CanesGa this weekend during @OntheRadarHoops #TheOpening He drive and orchestrated the team to a 4-0 mark. He runs a good team and makes the best decision for the team. pic.twitter.com/sdNZoYLI33

Another Georgia Canes product that gained some momentum at The Opening. The 6-foot-3 combo guard is strong, physical, skilled, and explosive. He never got sped up, took care of the basketball, and was efficient from the field. It wouldn’t surprise us to see Butler come out the travel season with multiple offers.

Nowadays everyone wants to score the ball, but Cam Perkins is a traditional point guard that thinks pass first. The 14 year old lefty was unfazed playing up in the seventeen and under division leading the All Stars to three wins and one loss. He did a little bit of everything, but his maturity level and smooth offensive arsenal are what caught everyone’s attention. This kid is the real deal. 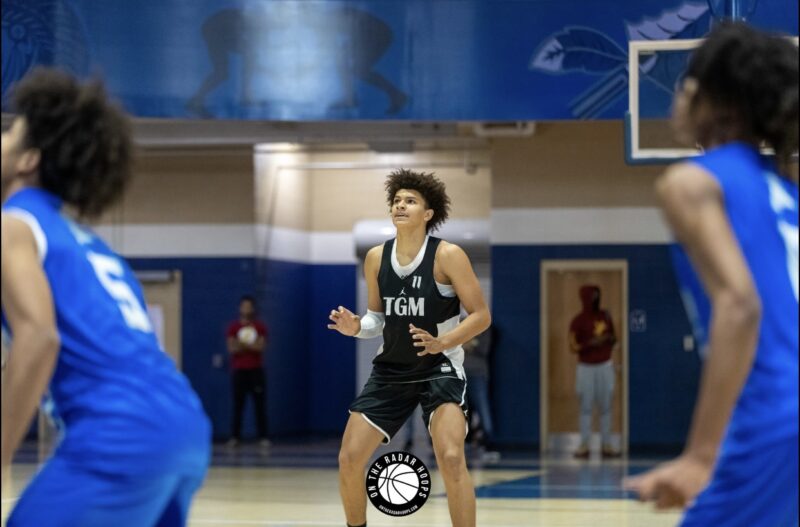 Woodard isn’t super athletic, but he is smart and used angles well getting to his sweet-spots. The 6-foot-5 wing put the ball in the hole at a high-clip and will be an intriguing prospect to stash in your notebooks until the Live Period.

At 6-foot-10, Jones is a project big-man with soft hands, good lateral movement, and great defensive instincts. The sophomore center was one of the top rim protectors and rebounders on hand, but will need to focus on developing an offensive repertoire to keep defenses honest. All things considered, you can’t teach size, so expect Jones’ name to be thrown around a lot in coaching circles this summer.

Young, but ready describes Green. He is a creative scorer that can fill up the stat sheet and is also an above average facilitator. When it is all said and done don’t be surprised to see the 6-foot-1 freshman in the top half of Georgia’s class of 2024 point guard list.