ATLANTA, GA – Back to Maynard Jackson HS we went for this year’s iteration of the UA Hard in the Paint Give Back Classic, sponsored by The Sports For Champions and Atlanta Xpress.

Friday’s action had quite a few terrific performances, here’s Part 2 of 2: 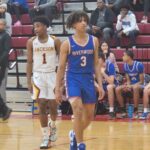 No stranger to big scoring outings Bilal went head to head with Maynard Jackson’s Cassius Watkins and the two put on the show of the day, 35 pts for Bilal in that one and many of it in the kind of fashion he’s known for with a variety of sweet pull-up jumpers from multiple ranges and creative touch on runners amidst pressure from all angles, he’s flat-out gifted as a bucket-getter and together with teammate and rising 2025 Jalen Leonard gives the Raiders some real punch to enjoy when they’re in the gym, Vanderbilt and Jerry Stackhouse are getting a really good one in Bilal. 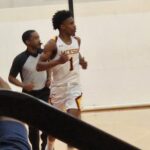 Balling out for the hosts once again was Watkins who vaulted into the recruiting viewscreen this past travel season with GA Canes playing alongside his Jackson teammate and outstanding 2025 prospect Yusef Bowyer, on this day he was the other half of a terrifically fun show put on by him and Riverwood’s Karris Bilal, Watkins finished with 29 pts and showed off the kind of combo guard magic he’s putting his stamp on night in and night out, he can play fast or slow using an advanced basketball mind as a penetrator but can absolutely kill you on the blow-by, exciting possibilities as the ceiling isn’t yet reached and he advances even further. 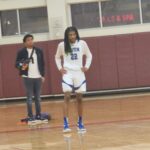 With Jakai Newton still recovering from knee surgery UConn-bound Steph Castle has naturally taken on more at both ends for the Rams, but in a quality nightcap win over Grovetown it was Whitlock’s deadeye shooting from beyond the arc which was critical to holding off the Warriors, five 3’s and 24 pts on the game showed off what Whitlock can do inside the arc as well and his defensive prowess has always been readily on display, with a slightly smaller group this year it will be key even when Jakai Newton returns for Whitlock to continue to be a crucial third scoring option for the Rams to make a last run at the 7A crown with this core crew. 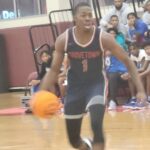 There’s only one speed Ferguson goes at when the ball is in his hands and playing virtually the entire game at PG these days for the Warriors he can dictate the pace of the game himself, when he’s at that downhill tempo he’s a brutal matchup for less physical and smaller PG’s who cannot contend with his stout frame and ability to barrel through contact, he can wear an opposing team down getting to the line so often and then hurt you when you try and pack it in by showing off really good shooting range to go with all else, a 2nd consecutive 6A run is surely very much in the cards and looking ahead Ferguson will be a really good player for Georgia State and Jonas Hayes in the Sun Belt.