ATLANTA METRO – A new format for my weekly AAU Workout Visits, as we dig deep on some of these rosters before, during, and after tournaments throughout the next 5 months.

INTRO: My first look and experience with Doug Butler’s SP Elite bunch as they took on Georgia Fire’s Premier bunch in this very early-season scrimmage, but he plans to bring a couple of competitive 15U and 16U bunches to the OTR circuit and beyond, drawing on players from a wide-ranging area that has a base in and around Conyers but is showing a further reach beyond that. 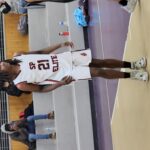 IMPRESSION-MAKERS: For the 15U’s I think we’ll be better suited upon a return visit later in the campaign, as there’s some intrigue there, but I can see that some of the rawness needs a little seasoning. On the 16U side, do like the length and movement of Miller County All-Region selection Damon Lewis, as at around 6-5 he has the hands and footwork to make trouble in near the basket and is sure to improve his shooting range to be more of a face-up threat. A pair of Heritage-Conyers guards in line to make some noise for the Patriot varsity next year, Mikey Tucker and Brandon Pruitt, were both speedy and yet smooth with the ball in the open floor and showed good decision-making and scoring ability in traffic. They defended with intensity and were both willing to slide from 1 to 2 and allow the other to control their action.

INTRO: As I learned up close and personal last year, this program draws some serious “dogs” who, nearly entirely from the south side of ATL, will get after you possession after possession. This wasn’t their complete group for what will be several upcoming tournaments with OTR as well as this weekend’s DT Invitational, but as expected I liked what I saw right out of the gate. 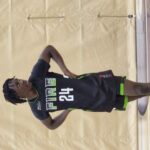 IMPRESSION-MAKERS: Banneker guard Joshua Lordge impressed me in the Fall League his school hosted back in August, as did some of his other school-mates, and he again showed me the kind of quickness and vision which makes him an effective penetrator. He’s a perfect fit with his energy for the Fire style. Two new names that are absolute must-commits to memory were Fayette County’s Tobi Ijiwoye and Sandy Creek’s Price Belam. Ijiwoye is a 6-2, Mack-truck out there with a frame suited for the gridiron, and he used that physicality and athleticism to glide, push and jump his way to a load of conversions. He looks and plays bigger than his size. Easy to understand why Belam couldn’t crack a very deep Patriots rotation down in Tyrone this season, but if he plays continually like what I saw last weekend he’ll be hard to keep off the floor next fall. Another A+ athlete, the sheer lift off the deck combined with a slasher’s mindset meant he had few answers on this day. He did spend some time outside the arc, and it’ll be great to see him work further from the basket more as the spring wears on because to be a regular part of the Sandy Creek rotation you better be able to shoot it well and consistently from distance.