COVINGTON, GA – The Big South Shootout was back in town yet again to polish off the 2022 schedule, this time shifting from Sandy Creek to Newton High School and incorporating primarily teams from the I-20 corridor.

Quite a few were on the docket that I hadn’t seen or don’t get a chance to see often, so it was a fun and important day. Of the 6 games on the schedule, I was able to catch 4. Here’s Part 2 of 2 highlighting standouts from games 2 thru 5. 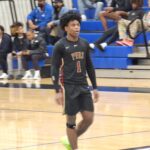 Granted I didn’t see the full slate of 6 games but White was neck and neck with Putnam County’s Eren Banks (see below) for best player I saw, and teammate 2023 guard Terry Coner Jr (20pts vs Grovetown) might well have been right here as well and could have easily been featured here, terrific variety of ways to attack you (22pts, 5 treys) showed White with a pretty a 3-pt stroke and a serious burst to get by you, the range of all the 3-pt bombers for a really good PVHS team (14-0 at press time) was really a little startling as they were pulling up from ranges that stretched Georgia defending 6A champ Grovetown’s defense to its reasonable limits, White is clearly one of the better 2024 PG prospects out of the Heart of Dixie.

Such impressive guard depth for the Indians who had this one under control past a tight 1Q, after an incredible 2 month gauntlet the Warriors are eyeing Region play I'd imagine pic.twitter.com/yAqUrxsBjq 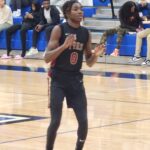 Love uncovering young players on the rise particularly when outside-GA teams come to visit and McCants was terrific, good size and length for a sophomore for the wing he like White and Coner just carved up one of the best teams in our state in Grovetown (playing without Malik Ferguson mind you), like the rest of his backcourt compadres his 3-pt range (hit 4 of them within 14 total by the Indians) as part of an overall efficient deep shooting night just took the Warriors out to the woodshed, part of a defensive scheme as well that despite a size deficiency to Grovetown was clamping the Warrior weapons and hitting the glass from all 5 spots. 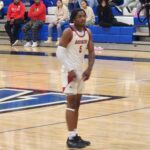 No twin brother Quin meant a lot more of the ball for Lamarius and he looked the part of the seasoned senior for this still very dangerous A-D1 contender, along with senior Phillip Baynes and when Quin is inserted this is as good an A-level public school as you’ll find after their magical 30-1 season a year ago that frankly should have resulted in a trip to Macon, Jackson can hurt you from multiple levels with speed and cunning as a lead guard and with shooting to keep you honest together with a real gut understanding for breaking down a defense.

Highly entertaining 2A vs 1A contest, and it seems it may come down to seniors Lamarius Jackson for the 'Skins or Eren Banks for the War Eagles to decide it (check MaxPreps later as the delay killed my sked today) pic.twitter.com/gJy70VF9vr

Banks heads up a mature and talented 2A Putnam bunch whose game vs Social Circle was circled on my calendar for weeks and was as high quality a small school public matchup as you’ll get, the Georgia Southern signee was flat-out terrific across the board matching Pinson Valley’s Caleb White for the day’s top performer honors, outside of the travel ball arena this was my first good look at Banks and he was everything as described, reminds me a bit some of former Grovetown guard Zach Bell but frankly more well-rounded as he can get off the deck like Bell but has some serious stuff from the outer levels, such polish and natural gifts he’s easily good enough to take this clear contender on his back to a 2A title run.