SUWANEE, GA – The 3-day hoop fest that is the Jared Cook Classic was held once again at North Gwinnett HS last week, and OTR was in the house for Day 2’s matchups. Some impressions: 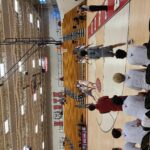 GAME NOTES: New Longhorn Head Coach Clay Wages has picked right up where Scott Bracco now of East Forsyth left off, as this group is organized and well-drilled in both the fundamentals and execution. Against what is traditionally one of the better defensive programs in the ATL-Metro, the solid junior trio of guards Niko Wilson, James Tyre and Keenan Gagen (pictured above) led a cutting, slashing and backdoor-ing onslaught on their way to an early lead that they never relinquished. Wilson (23pts) continues to show his quality in the under-6 foot crowd, and frankly you’d have a hard time keeping him out of the top guards of the early season at any height. Tyre is a slick floor leader with superb vision and a flair for the tight-window pass, while Gagen has the look of a potential breakout as he is more athletic than he appears and has some wiggle on his way to the hole to go with a nice stroke from deep. Lambert (2-1) will have more chances to show people their quality with a competitive non-region slate already underway and some tough matchups ahead in 7A-Region 6. Langston Hughes (1-2) is breaking in 3 good-looking new pieces to their returnees – sophomore John McQueen, junior Randy Latham and senior Tim James Jr – and all 3 are immediate impact contributors, so under the wily leadership of Coach Rory Welsh I expect this team to be really solid by the time the calendar turns. Joining them, senior guards Kobe Davis and Jaren Williams and tough senior forward Elijah Walden, are all steely Panther veterans all coming off good summers on the grassroots scene, with Walden and Davis in particular a really effective inside-out combo. 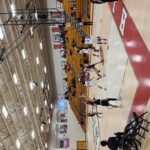 GAME NOTES: While it’s a great luxury to have a player the caliber of senior guard Anthony Arrington to rely on, Galloway continues to show us that it takes a village to win 5 of your first 6, and while most nights they may not have a talent advantage, Coach Andrew Tulowitzky helps close that gap with precise execution and plenty of fight within his guys. 18 points is an off-night these days for Arrington, but he still affects the game in so many ways, drawing doubles and going so hard on the attack as to open up gaping holes for his teammates. The available 6-2 guard got plenty of help on this day from Quentin Alterman, Bradley Banner, Max Grinberg and Shawn Simmonds (46 combined pts), and 11 3’s is always going to be a good recipe for a potential W. The slate for the Scots has virtually no let-up (they’ve got a high-quality road win over GAC already and a tight neutral-site loss on Day 1 of Jared Cook to an underrated Shiloh club) before Region play starts, as they’ll face Etowah, Denmark, Trinity Christian and Dacula prior to January. Miller Grove senior Jahmill Barber (16pts) is a nice 4-man for the Wolverines, and they run out some athletes as you might expect, but they’ll need to develop some add’l options to help out Barber and senior guard Mehki Mathis. 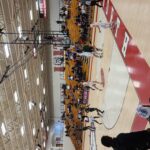 GAME NOTES: Senior guard Tyrese Elliott was on his game for Grayson (4-1) dropping 22pts in the win, and giving us all an entertaining duel with Eagles junior guard Brandon Rechsteiner (20pts). The explosion to the goal has been his trademark, and now bigger and stronger he can really torch defenses in the open floor and off the bounce in the halfcourt. Freshman big man 6-7 Amir Taylor has stepped in for the injured Chad Moodie and is advancing as an inside force at a rapid pace, he makes for a nice 1-2 with senior Chauncey Wiggins, who at 6-10 scarily brings it from all 3 levels. Senior Caleb Blackwell and rising sophomore Gicarri Harris round out the excellent 3-man backcourt for Coach Geoffrey Pierce, and their defense was especially noteworthy as a group on this day against an explosive attack from the Eagles. With Moodie likely done for the season with a broken arm, seniors Jalen Oglesby outside and Kenton Zachery inside will be key depth pieces toward any playoff run. Etowah (2-2) went down 10-0 early, and never seemed to gain the legs we’ve quickly grown to appreciate, this despite a spirited effort from senior big Josh Hughes against notable Rams size and 15 of his 20pts in the 2nd half from Rechsteiner. The 6-1 junior guard is such a joy to watch work, and he must be attended to at the 3-pt line as he can crush a team with spurts from the arc. Much Like Grayson, who play one of the most challenging schedules yearly, Etowah’s not shying away from a challenging early-season slate of their own, already splitting with River Ridge (W) and Archer (L), and having North Cobb, Galloway, Denmark and Sequoyah still to come for superb tactician coach Jason Dasinger.

GAME NOTES: A 26-point 1st qtr against the RJ Godfrey-less Bulldogs gave us a taste of what the Falcons had in store, and their depth and skill was just too much to overcome for what is a solid Dawg team. 20pts from Jaiun Simon and 19 from Kami Young led the way, with Simon showing off his mid-range shooting in spots and Young again making big shot after big shot to hold off Dawg rallies. It’s well documented now how Simon’s profile has risen, the 6-6 junior has such an effect on the game with his athleticism at the rim and crafty shot-making from multiple spots. The guard depth for Pebblebrook (4-1) Coach George Washington is scary, with seniors Andre Young, Jordan Brown and Nyle Hillmon and junior Xavier Bell so sound and polished, and sleeping on senior 6-6 Jaylen Perry as a frontcourt sidekick to Simon is a mistake for opponents. Based on early results, this is a top 5 team in the state right now to me, vaulting ahead of several we put in front of them. For superb Coach Matt Garner and North Gwinnett (3-1), getting whole and getting their integrated football players up to speed is naturally the next step, and when you get a healthy Godfrey together with the backcourt of fellow seniors Amaru Grosvenor and Thomas Allard, that’s a trio you can go to war with. Senior Dylan Gary and juniors Julian Walker and Ethan Washington offer athleticism, and will be key cogs once they get their legs.