The Thanksgiving Showcase presented by OntheRadarHoops.com provided a chance for area teams a measuring stick before they hit region play in the month of December. It also gave our OTRHoopsReport.com evaluators another chance to watch to see which individuals stood above the rest. Here is the recap of the feature game of the evening, which pitted the host team of St. Francis versus a talented Douglas County squad.

This game was much closer than the final score may indicate as the Knights held only a four point lead at the half. Douglas County was powered by long range sniper senior Corey Tillery who pumped in 20 points, which included four three-point jumpers on the game. Point guard and FAMU signee K’Ja Johnson added 17 points for the night. That back court duo was able to keep the Tigers close for most of the night. However, down the stretch the St. Francis guards would be too much on their home court. 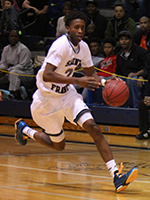 Florida State signee Malik Beasley would seal the game for the Knights as he knifed through the Douglas County defense repeatedly for a game high 36 points and a near triple double as he added nine rebounds and seven assists. Currently ranked No. 43 nationally in the BrandonClayScouting.com ELITE 100, Beasley electrified the crowd with multiple dunks in transition and off drives in the half-court. Fresh off of an unofficial visit to the University of Kentucky class of 2016 guard Kobi Simmons added 25 points 5 steals and 5 assists despite being in foul trouble for a portion of third quarter. The Knights seemed poised to make a repeat run at repeating as state champions in Class A in the state even as 4-star forward and Xavier signee Kaiser Gates missed Saturday evening with an injury.

St. Francis post Josh Coleman was impactful on the interior for coach Drew Catlett. The 6-9 Coastal Carolina signee did a good job of controlling the paint with post scores and rebounds for the Knights.

Douglas County guard Brandon Robinson delivered a solid floor game coach Hollis Bethea. The 6-5 wing embraces the role of a facilitator, but can find his shot when needed in a big moment.

Wallace Tucker from St. Francis made a great impression at the showcase. The 5-11 sophomore is a solid ball handling option for the Knights and should allow Beasley and Simmons the freedom to focus on scoring when he plays the point position.

Jonathan Hemingway is a National Evaluator for the OTRHoopsReport. He is also the publisher of CoachHemi.com. He has been involved in the community since 1996 as a coach, camp director and evaluator. You can reach him via email at JonathanHemingway@PeachStateBasketball.com and follow him on twitter @JLHemingwayPSB