HIRAM, GA – We polish off our look from the Super 64 last weekend with two more TOP Superlative categories and some names to jot down as we move closer to the ’21-22 season.

TOP LIVING IN THE SHADOW GUY(S) 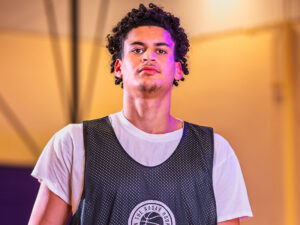 The Decatur program has nearly their entire roster on hand headlined by 2023 bigs Gai Chol, DK Manyiel and 2022 guard Jalen Forrest, yet each time I’ve seen Tenebay I’m not just impressed by his shooting game and fight from the guard spot but what he can bring to a next-level program, good size and stoutness for the 2-spot and with the aforementioned fight his polish as a scorer makes him super intriguing, no offer as of yet is puzzling as eyeballs have followed he and his Team Forrest/Greenforest mates for a solid 6 months now.

SGHS impressed me in June during team camps as they are super athletic and boast a pair of star guards in 2022 Maalik Leitch and 2023 Jet Horne, but do not miss the chance to see this high-flier who stole the show during the informal lunch break dunk competition and fits the mold of the style of play I see from the Comets like a glove, speed, defense, penetration and sound decision-making all are traits that standout out in Thompson and as a 3-guard mix with Leitch and Horne this should be a fun group to watch. 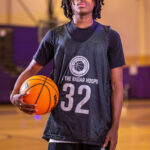 Wilson doesn’t necessarily live in the shadow of anyone in his program as he will be the man for the Longhorns this year, and while the 12-year old high school in Suwanee lives in the shadow of no one Wilson is making something of a meteoric rise with his recent play, he’s been a fiend on the Showcase scene of late as a 6-0 and under terror getting to the basket with skill and craftiness, he can play the lead guard of slide over and give you shooting range and wing play, one to watch in that monster 2023 class.

The recent Stephenson-transfer was a real eye-opener Saturday as he showed off the terrific hops and length at both ends, it was seemingly a dunk or a block or an easy smooth finish near the basket every time he was part of the play, there’s ballhandling enough to be effective and the size and movement is D1 level, so if the shooting can become a top-level weapon to go with the high-flying he can quickly add to his already bagged Iona and USC Upstate offers.

Hard to call Harrison a breakout as he’s been torching competition on all levels since April, he’s been in my estimation the most impressive prospect on the Showcase scene after a strong summer with Promise Elite and a Team Camp month of June with the Tigers that was equally eye-opening, he has toyed with virtually everyone trying to guard him this fall and the explosion to the rim and top-shelf shooting from all 3 levels has him on a trajectory to some lucky next-level program. 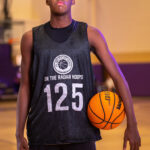 A 2nd impressive TN product shined joining Airious Bailey, at his size I loved the defensive versatility as he covered everyone on the floor, another athletic leaper who was a terror on the break or coming hard off the wing, didn’t see a ton of deep shooting but the gifts and the time he has left to develop are enough to keep a close eye trained here.