Class of 2017 guard Noah Cunningham of Madisonville, Ky., had his full repertoire of skills on display at the #CoachHemiShowcase last weekend. Photo cred – Nakita Hemingway

LEBANON, Tenn., – The third annual CoachHemi.com Spring Showcase brought out 50 prospects from Tennessee and Kentucky. The one day showcase camp provided prospects an ideal situation to show their talent and skills in front of national evaluators. Games were broadcasted on @SUVtv and skill sessions were ran by Christian Simmons (@WeWorkHoops) and his team of trainers. Here is a run down of the camp’s top performers. 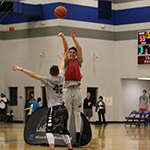 Carter comes from a unique place in the world where players are said to pass up lay-ups to shoot 3-point shots. The 6-foot-3 showed his ability to knock down long range jumpers all day long. Carter hit shot after shot all camp long even with a hand in his face. Carter is a hard-nosed player who is also not afraid to mix it up in the lane on both ends of the floor. Look for him to make noise this with Legacy Athletics on the travel circuit. 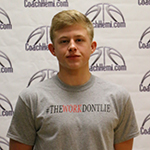 The 5-foot-11 sharp shooter heated up quickly in the camp’s first game of the day. His quick, compact release allows him to launch daggers from beyond the arc with accuracy. Cunningham projects to be shooting specialist at the next level, however he also demonstrated the necessary ball skill to be a primary handler. He has a feel for the game and can score the ball off of the move. Track Cunningham this spring and summer with Pocket City 2k17. 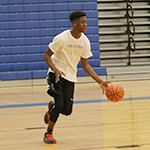 The 6-5 sophomore exerted himself as the most talented prospect in the gym on Sunday afternoon. Franklin Jr. has bounce to finish above the rim and even finished a highlight alley-oop at one point. Franklin projects to be a full-time wing with range beyond the 3-point line. Given his athleticism and perimeter skill, expect Franklin Jr. to be the next hot name to emerge from the Middle Tennessee area. 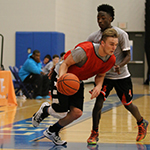 Showcase camps are meant just for scoring points, right? No one told Oliver that before Sunday as he took FOUR charges during game play. The junior wing plays one way all the time and that is to win. He competes on every possession and is constantly looking for ways to win each time down the court. Oliver was overheard telling his high school coach, Jim McDowell, after his last game, “I can’t jump to block shots. So I’ll just take charges.” That type of IQ is exactly what coaches and programs look for as cornerstones for winning traditions. In addition to his high energy hustle style, Oliver is a shot maker too. He hit several jumpers during game play. 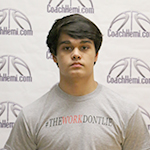 It would have been hard pressed to find a player who went harder than Ridenour this past weekend. The 6-foot guard attacked the rim with tenacity all camp long. He consistently got to the lane and finished at the rim off of the move. The East Tennessee native blends a quick first step with power, which makes him very tough to defend for many guards. Ridenour’s energy was infectious and he helped inspire those on his team to play harder as a result. The sophomore plays with EOTO on the travel circuit.

Watch the Game Replays from the #CoachHemiShowcase courtesy of @SUVtv here: