Georgia commitment Ashton Hagans of Newton (GA) was one of the many standouts from the Super 8 Showcase.

COVINGTON, Ga— On January 13, 2018, eight quality teams from varying regions of the peach state traveled to Newton High School to do battle. Hoop heads packed the gymnasium to take in four action packed games filled with energetic prospects. Hypesouth Media was in attendance and gives you the rundown from its notepad.

Ashton Hagans led the Newton Rams to a decisive 86-70 victory over Westside-Macon. He controlled the game in every facet and tallied his seventh triple-double (27p 14a 10r) of the season. The 6-4 UGA commit continued to put up big numbers and looked to be college ready, which has Bulldog fans salivating waiting on his arrival to Athens, Georgia.

While Hagans patrolled the perimeter, his running mate, Dre Butler, took care of the painted area. The 6-foot-5, 230-pound bruiser played well above the rim and punished defenders on the low block. Butler is a bit undersized for a power forward from a height standpoint, but he more than makes up for it with his physicality and superior athleticism. He finished with 27 points, seven rebounds, and two blocks in the win.

WATCH ?: @H23Ash with a sweet cross court pass to Dre Butler who slams it once again! ?? pic.twitter.com/mIel1DJBtr 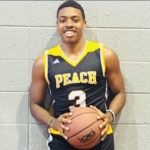 Peach County’s Brice Paster has flown severely under the radar and it is time for people to take notice. The 6-4 combo guard has been a model of consistency for the Trojans over the past couple seasons and he continued that trend on Saturday. Paster pumped in an impressive 24 points, seven assists, and six rebounds against GHSA 3A No.2 Jenkins. The unsigned senior is averaging 21.9-points, 7.2-rebounds, 5.3-assists, and 2.2-steals per game this season and remains one of the top available players in the state. We would highly recommend low-majors to do their due diligence here.

Meadowcreek versus Wheeler was a game filled with household names such as EJ Montgomery, Brandon Younger, Jamir Chaplin, Amari Kelly, and Cory Hightower to name a few. However, it was little Kedrick Green that caught our attention. Although he did not produce eye-popping numbers, his basketball-IQ, defensive prowess, and fearless approach jumped off the screen. The unknown 5-9 freshman is a gamer and is one that his teammates should feel very comfortable going to war with.

Tre Mays was pretty much the difference for Jenkins in a fairly tight contest versus Peach County. Everytime the Trojans made a run, Mays one-upped them with either a three-ball or an ankle breaking move that brought the crowd to their feet. The 5-10 speedster also dished out several assists to backcourt mate Sia Fisher who connected on four trifectas. All considered, the Warriors don’t pop off the screen when watching them play, but will definitely give themselves a chance in the AAA classification if they can consistently shoot it at a high-clip from downtown. 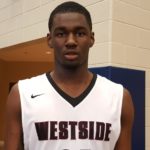 Westside-Macon duo, Greg Holloway and Khavon Moore have complemented each other fairly well all season. Holloway poured in 29 points and thirteen rebounds while Moore threw in 20 points, five assists, five rebounds, and two blocks against Newton.

On the recruiting trail, 6-6 Holloway is garnering interest from several Division-II programs and four-star Khavon Moore is set to decide between Alabama, Ohio State, Oklahoma, and Texas Tech on February 2, 2018.