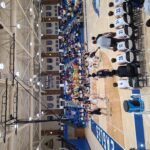 WHAT HAPPENED: Etowah W 67-42 – Playing without senior guard Grant Portera (food poisoning) and unable to get 6-11 senior center Braden Pierce enough quality touches, River Ridge just didn’t have enough overall firepower to stay with an Etowah team quickly establishing itself as one of the more explosive groups in the ATL-Metro. Portera at least would have given them another key perimeter shooter and penetrator, something added to open up the interior for Pierce and 6-9 senior Jared Russo. But the show was Etowah’s as rapidly-rising PG Brandon Rechsteiner had 23 pts with five 3s, as the junior just continues to impress both with his smooth game and physical body. There are moments where he seems like he could get 30 without a whole lot of effort even at only 6-1, but inside of Coach Jason Dasinger’s system he facilitates and has plenty of help to put up points. Fourteen apiece from guards senior Dajuan Devonish and rising sophomore Dimitri Angelakos is a symbol of the kind of balance available for the Eagles, and while junior Mason Etter only netted 10, he looms as such a versatile presence at 6-6. On offense he has a plethora of variety, but also guards bigs and smalls, draws charges and makes top-flight decisions with the ball. Junior SG David Hansraj had 16 for the Knights, and has developed into a fun and consistent inside-out scorer with good quickness and nice touch from downtown.

KEEP AN EYE ON Aiden Weaver (Etowah) >> Certainly Angelakos from a young star-on-the-rise standpoint bears watching, and Weaver only saw light minutes Tuesday, but I’ve seen the 2025 product a bit now, and even in spot duty Tuesday he again displayed an explosiveness both on the move and off the deck that is noteworthy. 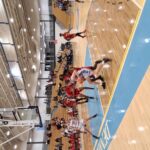 WHAT HAPPENED: Archer W 52-38 – As noted in last week’s edition of Sage Speaks, Denmark is without its 3 international transfers and won’t have any of them this year. That makes a matchup with a team like Archer doubly tough, as the Tigers bring so much defensive heat all game long, attacking in the full court even off missed baskets. Offensively, even without senior guard Mark Peah on this night, they have balance to call upon with the likes of four more senior guards in Damoni Harrison (19pts), Christian Drummer (13pts, all in the 1st half), Major Freeman and CJ Anderson. It’s an up and back package that will terrorize many teams on their schedule this year, with Harrison and Drummer the exceptional offensive pieces. The Danes got spirited performances from senior forward Jayden Hilliman on the interior, and wings senior Kourtland Tolbert (11pts) and junior Stefan Davidov continue to look the part of the carrying force for Coach Tyler Whitlock and his now-depleted ranks.

KEEP AN EYE ON Ryen Jones (Archer) >> The athletic 6-5 senior is basically the lone interior threat for a perimeter-based group, but that doesn’t minimize his importance or impact, as he can sky at the offensive end and is plenty powerful enough to bang with bigger frontlines. 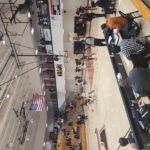 WHAT HAPPENED: Lanier W 80-68 – On paper this one was super-intriguing to me, as Walnut Grove brought a deep bench and mix of veterans and young risers to Sugar Hill, only to run into a great home atmosphere for Lanier and a trio of young 2024 stars who folks in Longhorn Country have to be seriously excited about. The backcourt of sophomores CJ Hyland and Tahai Morgan was downright electric most of the night, both showing off blistering speed on the drive and slick handles to evade pressure. Hyland (18pts) has been a known commodity on the grassroots scene after 2 straight strong summers, but Morgan is now someone who must be accounted for every night from a scouting standpoint as his 17 points had polish and often came at key junctures. The third sophomore, 6-7 Jayce Nathaniel, is no one’s third wheel, already with a grown man’s frame he can out-physical older players or out-finesse nearly anyone who stands in his ways, an impressive future high D1 attraction. Warriors senior forward Shawn Walker departed early in the 4th after suffering through foul trouble most of the game but still managed 13, while fellow senior frontliner 6-9 Valdy Zephir and rising 2024 guard Tyler Jewell led WGHS with 15 apiece.

KEEP AN EYE ON Blaine Bell (Lanier) >> The 6-9 Bell looks stronger, faster and a whole lot more confident than last year when he was tepid and perhaps overly unselfish. Friday night he took the game right at Walnut Grove from 15 feet in and looked the part of an every-night key component to any deep playoff run in 6A.