CHS STANDOUTS: Impressive team effort by CHS, it’s a group that may not look like much on paper compared to some of the other A-Private giants, particularly with so much youth as their star power, but perfectly capable skill-wise of making a final four or even Macon. You’d take their starting five up against virtually anyone, but 2024 guard Jax Abernathy (pictured above) is the star, a complete player who at 6-4 doesn’t have a discernable weakness that I could detect. He can find buckets in some many creative ways, or just beat you the old-fashioned way with precise shooting or genuine power. Scary to think as just a sophomore where his game is going, most likely to a high D1 as I believe he’s that good already.

NCCS STANDOUTS: 2023 F Albert Wilson has become the focal point of the Eagles attack, and you have to love his old-school post-game, a mix of power and finesse that is drawing and will draw a ton more eyeballs as he moves toward his senior year. 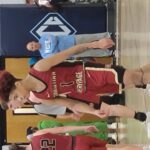 KEEP AN EYE ON CHS’s Zundra Jackson >> Jackson, another star sophomore for the Lions, is the floor general for this scoring matching from Dalton, and he’s got smoothness and toughness, and appears ahead of his age group in the poise dept as well. 2024 Cash Hare and 2023 Braden Koneman are also notable names to keep an eye on as the A-Private bracket moves along. 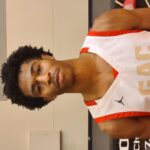 GAC STANDOUTS: Fun ATL-Metro private school matchup, though both teams were down stars as Eddie Page was dressed but resting an injury and Marist’s Miguel Perea was in street clothes. That didn’t stop Bucknell-commit Josh Fulton of the Spartans from looking as dominant as ever, as he seemingly played all 5 spots on the day to fill Page’s void and looked the full part a future Patriot League star guard. With all the talk around town about top players, it feels to me Fulton doesn’t get nearly enough credit for how good his full-court game is.

MARIST STANDOUTS: Marist plays a fun brand of ball that allows their guys to exploit their abilities, but combining no Perea with a tough shooting day against this level of opponent on the road was a tall ask. Junior forward Grant Erickson is your lunchpail role guy for this group, guarding opposing bigs with his good frame and attacking the glass with energy, he’s also a sneaky good scorer from 12 feet in.

KEEP AN EYE ON Chad Jackson >> The GAC senior guard was assertive and confident playing off of Fulton’s excellence, as he is quick to spot an opening as defenses lean toward Fulton, and at 6-3 with a powerful lower half he can be a problem getting to the basket. This GAC team at full strength is very much a 3A title threat. 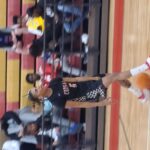 ALEXANDER STANDOUTS: A lot of Cougars got in on this party, even with Noah Melson not on hand, as the serious 6A contender was at their absolute best on this night, particularly early, as their pressure defense and run-outs produced a flurry of dunks and points from all spots and allowed them to never look back. Recent UVA-Wise signee Zion Fruster was superb yet again, and he’s been stringing together stellar performance nearly all season. So deep with veterans, to go with some impressively talented underclassmen, seniors Joffrey Nunnally, Jah’Kim Payne, Kelby Quarles, Sean Ivory, and Kyle Singer, any or all can be key contributors on a given night.

ROME STANDOUTS: We know Rome has more in the tank than we saw on this night. Junior guard Jayquan Nelson impressed me last summer as a pure scoring type, and he showed some of that against as good a defensive group as anyone will see. He’s one to watch this summer. 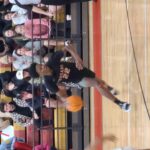 KEEP AN EYE ON Marvin McGhee >> Coming off the bench, 2023 McGhee was perhaps the best player on the floor in stretches for the dominant Cougars. Love the size and movement at 6-5, there’s a gliding quality about how he gets up and back, he can shoot it from distance or be a really effective and polished finisher closer to the basket.

ST FRANCIS STANDOUTS: Great to see the enormous gifts within 2023 guard Jase McCullough come to the forefront in a big game, and he sort of has always had that big-game swag about him. He demanded the ball, and took it right at a closing Patriots D, and even though my feed gave out inside the last minute you could see it was his game to finish off. Senior Drew Robinson was spirited and feisty all game as well, and deserves a lot of credit too for the huge road W.

MT PISGAH STANDOUTS: MJ Winter was spectacular, knocking down deep 3’s and slithering his way to the basket all night, to go of course with his unmatched on-ball defending. This would normally have been the kind of performance that was too good to beat, but the Knights wouldn’t give in. 2025 guard Micah Tucker was superb as well, as the two make up a backcourt that will have a lot to say about whether the Pats repeat as A-Private champs.

KEEP AN EYE ON Ahmad Clark >> The SF sophomore made an impact coming off the bench, and gives the Knights active size at 6-6 to go with their productive guards. This team has quietly gone 14-2 in Region and 3 of their 7 losses are out-of-state, so they too are someone you don’t want to see on your side of the A-Private bracket.