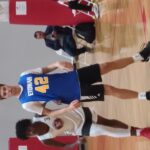 Even with an early Sunday tip, it doesn’t matter what time of day this Etowah group gets up or takes the floor, they play with the same flurry of confidence and pace that at times can simply bury opponents. The backcourt of 2022 and 2023 guards Dajaun Devonish and Brandon Rechsteiner set to the tone vs a big Lowndes team as both can handle PG duties when on the floor together, allowing the other to roam free for shots or drive opportunities. the 5-11 Devonish’s game has come so far over the last 18 months as he is playing with a lot more control and composure, leading to better chances for him and higher quality chances for his many offensive options around him. Rechsteiner too has made a massive jump from the talented 6-0 player we saw in the summer of 2020 to the legit D1 prospect we’re now seeing unveiling the full package. The work he has put in on the shooting, ballhandling, passing and strength training have all been catalysts to his jump and the college interest has followed. With a team that shares the ball so well and gets contributions from so many spots, 2023 guard Mason Etter may appear to get lost in the shuffle, but that’s only because he does so many things well on the floor for the Eagles and might fill the stat sheet on a given night with several things other than points. Coaches and evaluators will surely see deeper into the enormous value he provides, now a sturdy 6-5 with 2 seasons of varsity experience under his belt, he guards the post or the perimeter, rebounds like a forward, passes and shoots it like a guard and remains one of the headiest and most savvy players in the entire Atlanta area.

OUTLOOK: Even in a Region as tough as 5-7A, this is a contender for both their Region title and a deep 7A playoff run. 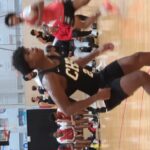 One might take a cursory glance up to Canton with two D1 players gone and a new coaching staff to boot and say this would be a tall order to follow up the recent success of this Warriors program (43 wins over the last 2 seasons with a Region title). But there’s an intriguing stable of talent set to step in and take on larger roles, and they’ve been showing it since March both on the AAU scene as well as together during the June Live Period.  It’ll be guard heavy (though 6-5 2023 forward Dastin Hart is looking better and better each time out and 6-6 senior Caleb Richardson is playing football), led by returnee 2023 PG Tayden Owens. Like Etowah’s Rechsteiner, there was a ton of tantalizing talent in the package in 2020, and with tireless work on his game and body he has made a jump to a status that requires significant attention from next-level programs. The physicality, the confidence, the ability to play at multiple speeds and beat you inside and out to the arc, it’s been fun to see the potential put into action through hard work, and he’s only a junior. His two Wood Elite 16U teammates (with Hart as well) Cameron Pope and Mason Bennett both are coming off summers where their profiles took notable leaps as they enter their junior seasons. Pope is the creative slashing guard with good size at 6-2, who is so good getting into and through traffic and adds a potent 3-pt shot when it gets rolling, and Bennett, the worker that every coach desires, a summer standout to me, he’s a true defensive go-getter who plays well above his 6-0 height in mixing it up down low and continues to show off a sneaky skill level that often surprises opponents. A wild card to watch, another 2023 guard 6-1 Braylin Giddens, flew a smidge under the radar playing with Georgia State Warriors this past summer but looks bigger and stronger and the lefty really knows how to score it.

OUTLOOK: Will be a pain in the neck in that same 5-7A Region with Etowah, especially at home, and unless injuries decimate their core will surely be in the 7A bracket in February with the talent to win a game or two. 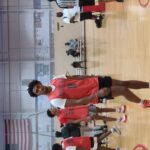 I’ve had the pleasure now of seeing both Archer as a team and many of their individual components quite a bit over the last 4 months. The results have been incredibly consistent – underrated and under-recognized talent and the kind of high-level defense that separates them into another category. Playing without emerging 2022 guard Major Freeman, they still looked very solid vs Cherokee Sunday and had their usual strengths on display. 2022 guard Damoni Harrison’s ascension to elite status in the ATL-Metro has been quite a story and has been documented by virtually every evaluator and scout in town. The 6-5 senior is chock full of confidence right now, and while the small school offers are beginning to roll in I would expect to see some larger programs get in the mix. Quiet during the Showcase season this fall, 2022 guard Christian Drummer is far from an afterthought with these Tigers. He was tremendous with the ATL All-Stars expanding his game more onto the ball and showing off this summer and Sunday some of the enormous athletic gifts he can offer a next-level lineup. At 6-4 with his kind of movement and breakdown ability he will be a terrific college player. Again sans Freeman, 2022 guard Mark Peah was knocking down 3’s and handling a lot of the point, where he’s very proficient and allows Harrison and Drummer to be devastating off the wings.

OUTLOOK: Another brutal Region is 7-7A, where this slightly undersized group will see a ton of frontcourt studs, but the way they play defense and with Harrison and Drummer having taken such monster jumps this is a sure-fire upper third 7A playoff qualifier out of their Region and a team you won’t want to have an off-night against come February bracket time.