WOODSTOCK, GA – To the hardwood went SH Report and Kris Watkins once again, this time for a Spring version of their highly successful and exposure-driven camps designed to get kids noticed before college coaches and regional evaluators.

Of the near 100 kids who came and played hard, here’s part 1 of the guys that were drawing a lot of eyeballs:

A near consensus choice as top performer of the day he was virtually unstoppable in what was not a dull field of guys by any stretch, handling the ball and knocking down shots as he usually does from wing spots he was quick and decisive and explosive to the rim with multiple dunks on the day, always been a sound defender he was in the grill of some good point guards on hand, wasn’t a ton he couldn’t or didn’t do with either flair or efficiency, already a riser and a favorite of mine he laid more foundation to a potential D1 level profile to me on the day. 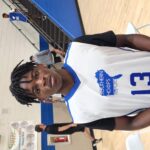 His Collins Hill transfer now officially in the books Hampton went out and performed in the fashion we’ve come to expect from the steady and sound PG, the shooting is and has been for the last 2 years such a devastating weapon and connected at such a high clip that just a few steps past halfcourt has become range where he needs to be marked, add to that a terrific understanding now as a more mature player of how to run a club and dissect a defense for himself and others it’s easy to see why his advanced game has attracted the interest of several D1 mid-majors. 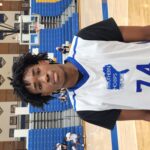 Perhaps no one drew more combined raves both in drills and in live play than the hybrid G/F Jenkins, more embarrassment of riches from the Newton program it’s easy to be overlooked with such star power ahead of him, but it won’t be long before Jenkins begins making waves of his own on the recruiting trail as the physical gifts and good understanding of where to be and how to attack were on display, the above the rim moments add to an intriguing perimeter-package which will likely be more unleashed in a somewhat smaller but more dynamic Rams starting lineup that includes two of the best 2023’s in the country (UConn-bound Stephon Castle and Indiana-bound Jakai Newton) and several others from that class that rank highly in the state. 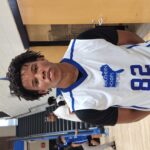 Add a fast-rising Mosley to the fun depth at guard returning coach Ty Baumgardner will have in his tool chest in Suwanee as the exciting and skilled 2025 joins the newly arrived Hampton and top returnees like Amare Banks, Jayden Williams and Kai McArthur, Mosley’s game is evolved and filled with scoring variety at all levels for such a young player and these traits were evident even last summer as a rising freshman right before he indeed did see varsity time last winter, has the potential to be one of the top guards in the ATL-Metro as early as next year with the development track he appears on. 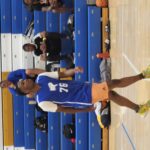 After a bit of a slow start which is not normally something we see with the dynamic athlete he came alive in the 2nd half of the day and had some high-level moments which have become regular for him during his really strong spring with PSB-Atlanta, good frame allows him to be physical on-demand but where he truly excels is with next-level speed up the floor which can both outrun defenses or carve them up with precision, can defend both guard spots easily and has clearly been one of the real surprise breakouts of the spring travel season and name to watch both later this month with Rockdale and surely in July. 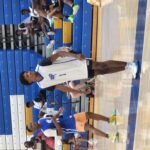 The day’s best passer to me was Gatlin and that’s a trait he’s always had but in a more open forum like a Showcase he had it on full display, still one of the best defenders on the floor wherever he goes and surely one of the fleetest afoot as well the junior-to-be is primed to make his presence felt in a Rams backcourt that will both need and potentially excel with his maturing all-around game as a big part of it, you can see he’s learned to harness a rare combo of a calm demeanor while at the same time not getting out control unleashing the naturally gifted speed and quickness. 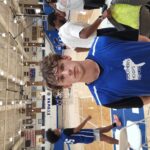 Had gotten a few glimpses of Gelsthorpe first on Hudl and then with Hoop ATL’s fun bunch playing with us at OTR, the word was “great shooter” and certainly the clips backed that up as he posted some big numbers from 3-land last season, in Saturday’s Showcase what thrilled was seeing him put aside the shooting particularly when they weren’t falling and showing off a really solid floor acumen as a lead guard and a ton of fire on spunk on defense, the ball-handling is tight and the vision was exemplary as he slyly sought gaps with speed and smarts around mostly taller players to make the right pass on the money, legit good looking under 6-foot prospect.