Let’s run through the first 5:

The Appalachian St-commit has been in strong form from day one of the season for the 8-0 Cardinals, who boast wins over Dacula, Kell and Jonesboro in their pre-Christmas slate. The master of the step-back 3, now a senior he has added more physicality to a game that was already smooth and polished going back 2 years to his time at South Cobb. Averaging 20ppg, 4 reb, and 3 asts, there isn’t one part of his game you can focus on to shut down, as he can get searing hot from 3-land or get all 20 of that average cutting you up on the drive. The good size allows him to be effective both now and likely at App St playing either guard spot, as he can surely run an offense for you, but can also leave the ball to Justin McCarter or Jahmeir Chapman and become a lethal scoring option. Have always enjoyed watching him work, as that polish has clearly come from great genes and a ton of work on his craft. 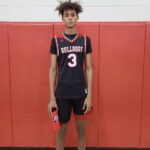 The still available Chol has made some startling improvements from when I first saw him in December of 2020 at the Forsyth-Cherokee Challenge. Back then he was plenty intriguing with the measurables, the shot-blocking and the rebounding, but most impressively has been the work he’s put in extending his shooting range well past where it was a year ago. Now a legit 3-pt threat, he requires full attention past the arc taking him from a more traditional 4-man into the ever-expanding realm of stretch-4’s. Together with the shooting range is a lot more confidence using the bounce in space, the jab-step, the stop and pop, these are all now part of the package. As he’s often guarded by smaller defenders, he can now use his long strides and ball control to work downhill from the perimeter and then finish well above the defense.  Averaging 20 pts, 7 reb, and 6 blocks per game for the 8-5 Bulldogs, there’s no question his recruitment is gaining steam beyond some of the non-D1 offers he currently holds, and as of publication, from his AAU club AC Georgia, “Chol has heard from or had at a practice or game in the past two weeks the following programs: Rhode Island, George Mason, New Mexico, Western Kentucky, Lamar, Howard, Central Michigan, Kennesaw State, Texas State, James Madison, Brown, Old Dominion, Tennessee Tech & Georgia Southern.” 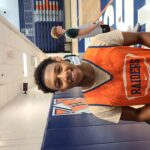 Recently got his 1,000 career point for the 6-4 Raiders (as did outstanding teammate Mehki Mawdesley), and this is player and program lost somewhat due to geography. But the basketball coming from Mt Airy and from Dooley is hard to ignore, as the speedster has been getting it done for some time now boasting averages of over 20ppg and nearly 6 rebounds from the guard spot. We speak of polish with players a lot, and to me that is a two-fold combo of advanced comfort level with the ball as well as an advanced skillset that regardless of size keeps you a 1/2 step ahead of the next guy. While he moves with such a burst, there’s never anything out of control about how Dooley gets his work in, as he packs a ton of power into that 5-10 frame and plays through contact as well as any guard I’ve seen in the class. Wary of his blow-by ability, you’d be remiss to leave too much space out past the arc as he has a really pretty stroke that has more of that natural polish a true baller just kind of possesses. He can run my squad any day, and is one of the real steals in the 2022 class, making the next-level program that lands him look like geniuses.

I’ve spent a good amount of time on these pages documenting Arrington’s underrated brilliance, be it on rankings boards or just straight up lacking in recognition of the positives he brings to the floor. Still under-recruited and under-recognized, he continues to post startlingly consistent numbers for a Scots (8-2) team taking on all comers in a really tough gauntlet so far. The career averages well above 20ppg are well known, and he may not be the gifted natural athlete that some of these guys on this are, but that’s a poor excuse to fail to see the results on film and paper. Even more neglected has been his yearly willingness to get into the mess and rebound at 6-2, often playing and guarding forwards, yet another point of emphasis when looking at the full picture of a guy who can get you 35 one night in spectacular fashion, but then come back the next and lead his crew to victory getting 15 pts and 15 rebounds. He has D1 quality in all aspects, a high IQ brand of ball that translates really well at either guard spot and is a true ATL-Metro plug and play sleeper for sure. 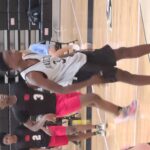 Playing with the ball in his hands a lot more this year, Tidor has consistently been a 17-18ppg guy the last 2 years, and is one of the top underrated slashing guards in the class and being the catalyst for the 6-2 Raiders once again. I’ve always loved his downhill game one that can be right through you or up above the rim if needed. The handle, once perhaps just a weapon from the wing, is now part of a full-court arsenal where he can lead the break as an excellent passer or run the halfcourt set for you. He’s particularly adept like many on this list of freeing up space for his shot using creativity and a next-level burst into open areas. Stopping him getting at the rim has always been a major chore, be it in summer or regular season play, as he has strength packed into a lengthy frame for a 6-4 guy. And like Dooley and Arrington lines up as a real recruiting steal to the staff that puts in the work by heading out to Dallas to see for themselves.