EMERSON, GA – LakePoint Champions Complex played host this past weekend to the 6th Annual US Basketball Games hosted by Halftime Sports, and big crowds were treated to some high-level hoops. Boys and girls teams from twelve states were represented across 8 divisions in the exciting event, and OTR was in the gym taking a closer look at the HS-aged groups from classes 2022 to 2025.

Part of our coverage will include highlighting outstanding performers from across multiple states in attendance, but to start here’s Part 1 in a breakdown of some of the top performers from our own home state here in Georgia (in no particular order):

Spunky, fireplug of a lead guard in a similar mold to current Creekview PG 2022 Trent Jackson, was poised and mostly pass-first early and showed off excellent vision and decision-making, turned up the scoring in the 2nd half getting penetration or leading the break vs Indiana, took the 3-ball when it came his way and was confident in pulling it. 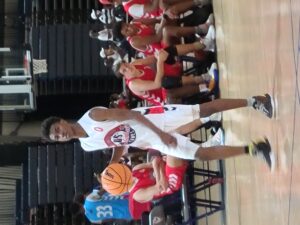 New Cherokee Coach Joe Viehman must love the guard pipeline he’s inherited with emerging 2023 risers Tayden Owens, Mason Bennett and Cameron Pope (all 3 on hand as well playing up in 17U/18U representing GA with Wood Elite) set for starring roles and the likes of 2023 Braylin Giddens and Sanford in line for possible notable supporting roles, Sanford was smooth and controlled and handled either guard spot with equal aplomb, the confidence from deep range stood out to augment his composure and ability to see the game well at a young age.

The size is immediately fascinating to go with a nice mix of careful offensive examination and notable unselfishness, could even add another layer of aggressive play seeing as how his dribble-drive package was solid and a lot to handle at his size, most assertive facing up from the wing and getting downhill but also showed off a 3-pt stroke that required attention from NC defenders, yet another young Indians player who can make a play to crack an always deep roster and sneak up on radars across town.

Among 3 guards on this team that stood out vs a good North Carolina bunch, using his good frame to fight through traffic was excellent getting the hole with either hand, good on the spot-up 3 as he moved between guard spots all game depending on who was on the floor with him.

A little more comfortable controlling the ball and the action than coming off the wing, another physical style driving it into the teeth, creative finisher in close and has intriguing upside as a lead guard prospect as the scoring-streakiness can be momentum changing.

Playing for NC but goes to school here in GA, is no secret in Southeast recruiting circles as he’s been piling up D1 offers this summer, has such a polish in the way he scores it to go with sneaky explosiveness to the rim for a still lean frame, but lean aside the devastating combination of size, shooting and understanding made him as tough a matchup as there was on hand in the 17U/18U division and an easy to spot standout in Saturday’s Showcase Game. 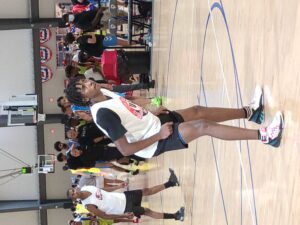 After an intriguing June where I got to see South Gwinnett both as a team and as individuals spread across camps and showcases Heathington brought his athletic brand of ball up to LakePoint, he gets off the deck in a hurry and brought a little inside-out game Saturday vs North Carolina as he knocked it down from 3, showed some nimble moves near the basket and guarded multiple spots.

Formerly of Shiloh and Camp Jewell Griffin will be playing in Orlando, FL this coming year, the skillset that has been emerging for 2 years as I’ve watched him along the AAU and HS trails was still evident, always an elite on-ball defender his acumen as a floor leader was what really popped as in both the Showcase Game Saturday and again Sunday in a GA vs GA team 16U battle he was confident, composed and explosive up and down the floor.