MARIETTA, GA – Switched over to Marietta HS from Next Play 360 for some Sunday action from Who Wants The Smoke.

Here are some can’t-miss, quick-hitters who shined:

Ethan Carter (pictured above) >> One of the weekend’s most complete players for his age, the Game Elite 360 G/F can do just about anything he wants out there at 6-6 with tremendous natural gifts and a court awareness that is steps ahead of his peers, plays spatially like a PG and then quickly morphs into an interior force with both hands around the basket, expect the Arlington Christian 2025 to make all kinds of waves as a sophomore next fall and jumpstart what is sure to be a D1-level recruitment cycle. 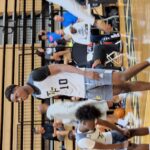 Daniel Daramola >> The Team Forrest 2025 stud looked really interesting having space on the interior to himself, and even with 7-footers Gai Chol and DK Manyiel back for defending A-Private state champs Greenforest, the 6-8 Daramola is super agile particularly as a rejector and has a ton of offensive variety still to unveil as his game matures. 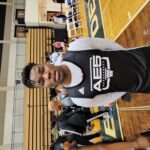 Carby Martin >> Martin brings a physicality to his guard play that is typical of East Coweta backcourt guys, with AE5 he’s a crafty downhill scorer with a really good on-court IQ that allows him to contribute from multiple spots, expect to hear more of the 2025’s name. 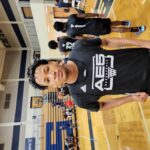 Sean Van Dorn >> The second of two intriguing AE5 and south side guys this one from Fayette County HS, expect him to be a wing contributor as a sophomore with good length around 6-5, a soft J, and springy athleticism that will look good alongside star 2023 RJ Kennedy. 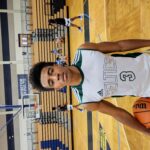 Cameron Bland >> Had a really strong freshman season with Lambert and will have the likes of exciting 2023’s Niko Wilson, James Tyre and Keenan Gagen back alongside him to form a seriously explosive quartet, with the Celtics South / All-In Elite collab group they put forth at Marietta he was noticeably unselfish but also in control of the game from both a scoring and distributing standpoint, really impressive young 2025 guard. 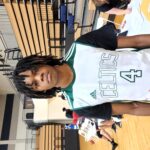 Nigel Thomas >> With the present at McDonough looking really strong with returnees like Daavion Thomas, Keenan Gray, Avante Nichols, Amon McDowell and Grant Randall, we got a glimpse of one of the future pieces in Warhawks Head Coach BJ Thomas’ 2025 son, 6-5 with long arms and a guards game for Celtics South / All-In Elite he played above and around the large majority of those trying to guard him at this stage and the game is packed with high-level potential either in the backcourt or as a future small forward. 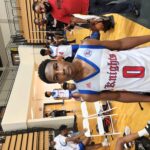 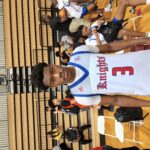 Julian Shanks and Phillip Howard >> Really impressed with the play of this future Arabia Mountain backcourt playing with CM Knights as the two 2025’s were all over the floor, Shanks has blinding speed with the ball and plays a fearless brand of ball, while Howard went straight at whatever defense was thrown at him and sought and played through contact all afternoon.

Devin Hutcherson, Bobby Buggs, Cortez Redding, Manny Green >> Four 2026 names to watch for sure coming out of the day, Hutcherson of Game Elite 360 is headed for Mount Pisgah and has notable specks of a D1-potential game already as he settles into whatever position best suits him with more growth likely from the 6-3 frame he’s at now, TSF’s Buggs is set to attend Piedmont Christian out in Monticello and was beaming with confidence at the PG position and though a smaller guy at the moment has the game to make waves, Redding is built like a young football defensive back prospect and can handle it or play off the ball for the Georgia Stars and while currently in the Forest Park district appears unlikely to land there next fall, Green was yet another AE5 guy who drew eyeballs as their 2025 and 2026 groups were running roughshod all over the place, he showed off tremendously exciting vertical did the Cedar Grove freshman-to be and that combined with a serious tenacity around the basket was too much for teams to handle.