MARIETTA, GA – Four courts of action provided some great juice last Saturday at OTR’s Who Wants The Smoke tournament, as a deep field of top teams from Georgia and beyond descended on the Marietta-area for some high level, post-live period action.

Again we had the gym covered with scouts, here’s Part 2 of 2 on some guys who couldn’t get by me. 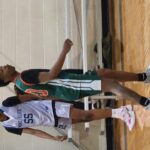 Getting difficult when watching the Canes 16U version to decide who’s looking better between Watkins and 2025 Maynard Jackson teammate Yusef Bowyer, both have been two of the more consistently strong players so far in the first 2 months of travel ball, Watkins can go on some stunning scoring runs with a burst that is way above average and again has shown the ability to play either guard spot with equal effectiveness, he’s an absolute name to watch as one of the better defenders I’ve seen as well as the rising Bowyer too has begun to draw interest from the likes of SUNY-Albany to give you an idea of the young PG’s appeal. 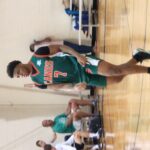 Using the term “power” forward when describing Matthews almost doesn’t do justice to the sheer volume of his impressive presence on the floor, the D1 football prospect out of Hiram has plenty of basketball moxie as well including a nice touch from 15 feet and the kind of excellent feet and movement you’d expect from a future Power 5 defensive lineman, he’s been basically a double-double machine for the Canes so far and is underrated as a shot-blocker as well at 6-7, takes what was already going to be a very good Hiram team coming back next year possibly into state contender material in a revamped but still really tough 5A class. 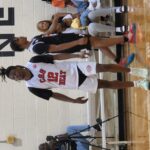 Similar scenario with CSS Heat as with the Canes as 2022 forward Kyric Davis has been equally noticeable for this always highly competitive group from Middle GA, Davis was a serious competitor and eye-opening athlete with Sumter County this year and bears watching over the next 2 months, Frazier is such a steal for whoever lands him as he’s a top 5 overall pure athlete that I’ve seen over the last year both during the regular season and Showcase circuits, that innate explosiveness combined with a very good jump shot, A+ defending, and ballhandling for either guard spot are the key ingredients in the steal.

Much like his play at OTR’s the Opening back in March here was Thomas once again dangling some of the immense promise in his game, he’s doing a lot more delivering than just dangling of late and playing both guard spots with a seemingly clear understanding that his path to the next level may very well be paved as a PG, he’s got the vision and ability to find people at 6-4 and that trait was fully on display at Smoke, add to that his ability as an exciting wing attacker above and below the rim and the package takes on a new shape, always been enamored with the South Paulding guard’s upside and a lot of it is being shown of late. 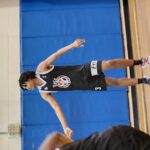 Been hard of late for EYA guys to outshine the stellar play of Avante Nichols as the emerging McDonough 2023 G/F has been up above the rim and producing at both ends, the growth however in Kennedy’s game from a sharpshooter with a lot of promise is notable and stood out at Smoke, he’s now a much more complete guard who looked good handling more PG at Saturday and that opens up more doors potentially for him, he can still be your gunner on the wing as one of the ATL-Metro’s best known shooters and the defense and motor are superb adding up to an effort level and fire that grabs eyeballs as well, set for a breakout senior season with Fayette County. 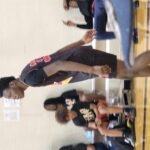 Rockdale County SG Nate Richards drilled the GW-shot in the game we saw and his play is creeping onto radars with the shot-making and confidence from range, Graham-Davis though continues an intriguing Midtown HS run of guys who are making waves around town, much like impression-making 2022’s Autrey Barnes and Khris Washington and fellow 2023 Will Hunter BGD has been a consummate effort-guy who has just enough size at 6-3 to be effective at forward and just enough wiggle and variety to help you facing up from the perimeter, I think all these Midtown guys (2024 guard Charlie Kane of Hoop ATL is one to watch as well) will all benefit this travel season from the touches and exposure to the competition they’re facing.

I’ve been selling the Gray train to fellow evaluators and many finally got on board at Smoke seemingly agreeing that he is a terrifically exciting guard prospect and one of the best overall in the 2024 class, fellow OTR evaluator Jon Hemingway and I were jokingly throwing around the word “dominant” but to me it’s less a joke and becoming a much more well-known fact, just entering his junior year there’s still so much room to grow and that’s frightening as the full-court package is real and is certainly gaining steam with college coaches as well. 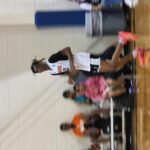 One of the day’s real bright spots was Randall as he was a real worker at the defensive end as a post defender and hit the glass hard for a lean guy, the strength is deceptive and real though as he uses it cunningly at the offensive end as well as one of those wiry strong types, loved the jump shot to deeper ranges as that was a facet I hadn’t seen yet, that shooting at 6-8 and perhaps 5 to 10 more pounds of muscle can be a real eye-opener for a likely state-title contending McDonough team expected to be much more visible around town in Showcase events.