EMERSON, GA – Took in some Saturday action from LakePoint this past weekend at the 2nd of RYZE’s three Live Showcases, and got a chance to look in on some teams I hadn’t seen a lot of so far this spring.

Here are some eye-catchers from the day:

Looking bigger, stronger and more well-rounded this Model HS product is not only having a noticeable spring for ENG but is set for a breakout senior season even after 1st-Team All-Region honors this past winter, has the measurables, the frame, the motor, the IQ, he’s come so far from a young player with promise when I saw him 2 years ago to the college-ready G/F with multi-level scoring ability, can handle the ball for you, expansive shooting range, versatile defensive capability as a perimeter defender or interior shot-blocker, setting up as a 2023 steal, younger brother Jeremias a few courts over continued his impressive spring as well as the 6-9 2024 double-double machine has picked up offers from Kansas St and Tulane most notably among others. 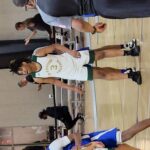 Playing up with the 17U Celtics Bailey and Jakenes Heard of ENG had a spirited and fun battle to watch for most of the game, something about Therrell guys and their boundless energy and drive always catches my attention, Bailey has plenty of ability to go with the fire as he was a bucket from 8 feet in and hit the glass like a bigger forward, the movement matches his football acumen as a LB/DE as he like his match-up Heard can guard the perimeter or bang down low with posts, under a new regime at Therrell but don’t think the returning group there will play with any less fire and grit at all. 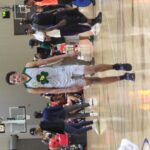 TD has spent the better portion (if not all of it) of the spring playing up in 17U divisions across town and looking very much the part with no dropoff, the roster is deep and chock full of names to know but it was Reid on this particular Saturday who was as he is apt to be a man among boys in spots, the dynamic ability to pull forwards away from the basket and beat them with deep shooting or the blow-by and then take his act to the block where his post presence is polished and special can be flat-out frightening, has been on evaluator and coach radars since his freshman year but it’s easy to get a little overlooked with the incredible 2023 class there at Grovetown that was so instrumental in bringing home the 6A title back in March, still Reid is a top D1 level 2024 in the state. 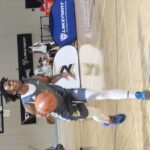 The door is wide open at Alexander for Kennedy to step into the PG role vacated by graduating Joffrey Nunnally, in a tough game with a really good SEBA team he was aggressive looking for his offense despite having a pass-first mentality with all those Forrest weapons that was notable, he has a really good burst with the ball pushing pace or finding his way into a gap, top-flight on-ball defending like most ALX guys is something you can’t overlook, he’ll have fellow travel ball standouts Braeden Lue, Marvin McGhee, Noah Melson and Jazzdon Streeter back with him next fall for what should be another tough Cougar squad. 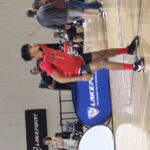 Has already established himself as one of the travel ball season’s best 2023’s with consistency of performance in all aspects on the floor, has played guard and forward and guarded 4 spots for SEBA, against a huge Team Forrest group he had the perimeter game working from downtown and on the drive as he uses his length to shoot over smaller 2’s and a slithery style to get to the rack, fully healthy and looking the part of one of several talented Osborne returning pieces (Keshawn McPherson, Jon Carroll, Akai Fleming, Kevin Hicks are among the others) that could help lead the Cardinals to big things next winter. 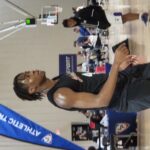 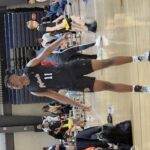 Jayhawks teammate Nile King out of Union Grove was superb as well and bears mentioning as a name to know from this roster of all-out gamers and high-level defenders, in a terrific come from behind OT win over a really good Pro One team the team defense was on a level you don’t regularly see in travel ball, Isaac was at the forefront of virtually everything for the Jayhawks and has the look of a must-see name out of ELCA and the south side of ATL, can play either guard spot with a stout frame and a really good feel for scoring or distributing, he can be a powerhouse getting to the hole or use natural gifted finesse and unleash more creativity, find this Jayhawks bunch on a weekend as Isaac and King are not likely to disappoint. 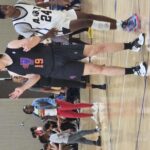 Has the ability to stuff the stat sheet and most notably affect the game beyond scoring, that always intrigues me because winning plays come in multiple forms and dominating the glass, closing off the rim, and making sound passes in the transition game all lead to winning basketball, still Kemp has posted really solid scoring numbers for SBT so far this spring and looks confident and assertive in that role, has a chance over the next year finishing up with SBT and into his junior year at Mt Paran to stamp his name on the recruiting scene as the hustle, IQ and scoring ability out to the arc at 6-7 will not go overlooked for long. 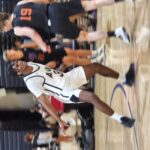 Playing up with AOT’s 2024 group Greene was noticeable vs SBT, another young McDonough up and comer making waves on the scene he’s plenty physical at the 2-spot but has an athletic fluidity of movement to go with that power that was hard to miss, in transition and around the basket he was a bucket so I’m looking forward to seeing more of his work further out but has a definite chance to be a contributor on a WarHawks team that returns a ton of studs and will be right back in the 4A state title mix.