MARIETTA, Georgia, – There is no rest for those who looking to make their mark in the travel basketball sphere. The weekend after the second open period, more than 100 teams were back in the gym this weekend to compete. The OTR media team was in full effect. Here are a few of the names that caught our attention from day one. 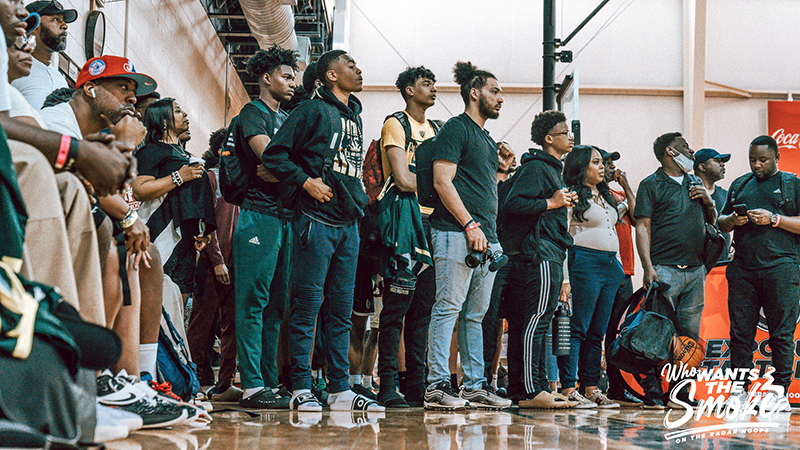 Bolden is becoming a staff favorite, because of his productiveness and hard-nosed attitude. The well-built guard uses his body well to fend off defenders who try curve him away from scoring opportunities. He is the type of player who might be better off not being labeled as playing a particular position. He can defend multiple positions in the back court or on the wing. He is equally effective as a defender and rebounder.

Bryant launched himself in a major way at the event. He scored 22 points in the team’s opening game. That outing included six 3-pointers. His scoring effort helped propel his squad to a win in the process. Bryant is a cold-blooded shooter who does not hesitate to fire when he has a look. His confidence can turn the turn of the game in a moment’s notice.

He ripped off six 3-pointers before finishing a couple lay-ups to seal the game.

Gray possesses something special on the basketball court. He has instincts that a coach cannot teach. His feel for the game combined with ability to score make him one of the most dominant guards we evaluated this weekend. The sophomore is particularly effective in the ball screen action where slide into the lane to make plays. The left-hander had multiple high scoring games over the course of the two days.

Green made an immediate impact with a 25-point, seven 3-pointer game on Saturday morning. Although the sophomore plays on a talented team with several shooters, he proved that his name should be mentioned immediately as a difference maker. Not only can he shoot the ball with confidence from distance, but more importantly he knows how to create space in rhythm at the right moment to get his shot off.

Porter is one of those guards that you need on your roster. He gets down into a stance and defends the ball with tenacity. On the offensive end he can handle and hit open shots. His ability to get a step on the defense and pull-up in mid-range makes his game very appealing.

Thomas got on the radar in one of the first games of the tournament with his blend ball handling and scoring instinct. The freshman is a steady lead guard who dances through traffic to set up his teammates with a pass or hit a pull-up jumper. Expect Thomas to continue his assent in future years.

Smith is a smooth 6-5 guard that can put the ball in the bucket in a variety of ways. He did it primarily with turnaround and step back jumpers on Saturday morning. He scored 17 points in a win for his team. His footwork and body control combined with his shooting touch make him a sophomore to track heading into this summer.

Smith is a forward that has his best days of basketball still in front of him. He is an athletic, well-built prospect that can control the boards with his quick leaping and strong hands. He showed an added layer of skill this weekend by stepping out to the perimeter and attacking the lane with the bounce. It might be too early to predict Smith’s ceiling. At the moment, he is an intriguing prospect who brings great versatility to the court.