SUWANEE, GA – Twice a travel season the folks at Hoops Hustlers put on the Tipoff Classic, held primarily at SSA but also a few outside venues.

It yearly draws some of the top teams in the ATL-Metro and throughout the Southeast, and I got a look at some game blocks during Saturday’s action. 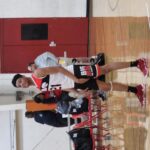 >> Mid-State Elite out of Tennessee is a name program from the Volunteer state, and their 17U’s were impressively athletic, 6-7 mobile forward Ronald Jessamy has several D1 offers and was all over the place vs PSB-Atlanta, blocking shots and then getting out and finishing off the next break, showing an intriguing baby-hook game that was clearly not something he just started the day before, and was really effective facing up with soft touch from 15+ and good burst getting by people.

>> It was good to see Big Shots Elite VA Nets in the house after watching them win a lot vs Atlanta and Florida teams last summer. They got a nice well-rounded roster yet again as 17U’s, and showed that off with 6 guys scoring 4 pts or more in a grind-it-out game vs a good Team Knight program. Abu Yarmah led all scorer’s with 15 for the guard-heavy and pressure-defense-reliant crew from Virginia. 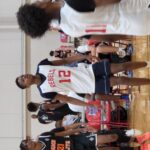 >> Hadn’t seen or heard of the Ohio Revels before, but their 16U bunch had a big man to watch out of the Midwest in 6-9 Deandre Jones. He was an absolute eraser on D and as a wiry rim-runner was tough to stay with him in the open floor. He needs to add strength before next summer when he really pops up on radars, but the hands and movement were more than enough for now as a super-effective glass cleaner and interior scorer.

>> Florida Rebels 16U was in the house and had a spirited dunkfest with Game Elite Saturday. I was excited to watch them after they were so good down at OTR’s The Florida Opening, and once again their deep cast of athletic forwards got out into space and created above and below the rim. Karter Knox and Marcus Allen, both hovering around that 6-6 or 6-7 mark, in particular had some explosive plays at the cup and went toe to toe with an equally athletic Game Elite roster in a fun one.

>> Speaking of Game Elite 16U, CJ Brown (pictured at top) was the most spectacular player I saw over the day, he was at times unstoppable and plays with such an intense motor for AAU ball. The 2024 speedster had a monster season with Walker this past winter and plays on or off the ball with equal aplomb as a scoring threat or distributor. He’s clearly one of the fastest risers in the ATL-Metro. 7-0 Peyton Marshall continues to make strides, as the Kell center is getting fleeter on his feet and more in tune with the flow of the game as he matures, naturally the 2024 will spearhead what should be a highly-ranked Longhorns bunch next fall. Stunning 2026 athlete Caleb Holt out of Alabama was eye-catching, the 6-5 wing had some above the rim moments which brought the house down, and it was hard to believe he was currently in 8th-grade. D1 offers are already pouring in. 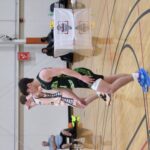 >> Giving Brown a run for his money for most impressive performance of the day was ATL T-Wolves White guard Luke Flynn. The Walton junior to be was an absolute bucket from range all game long vs Wood Elite and just keeps taking steps upward in his rise as one of the top 2024 players in the ATL-Metro. It’s just getting too hard to gloss over all the things he does well as a scoring PG, the decision-making is precise, the body is beginning to get to the point where he can absorb high-level contact, he’s a gutty well-drilled defender, and he just knows how to score it. Playing with another uber-riser in West Forsyth SG Will Moore makes for must-see viewing playing up with these 17U T-Wolves White. 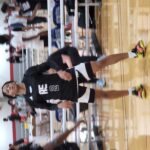 >> 2023 PG Noricco Danner stood out for AE5 on a roster full of big names in their fun game vs Team Huncho, the Tri-Cities guard was a demon getting into traffic either for a colorful finish or stopping and popping from the elbows. He pushes pace with control and explosiveness when needed, and teams on this AE5 crew with fellow Bulldog and super-talented Kory Mincy, in what’s sure to be one of the ATL-Metro’s best backcourt once again for the returning 5A champions.

>> He perhaps wasn’t at his sharpest vs Ohio Rebels, but Game Elite 360 16U guard Keenan Gray seemingly always catches my eye when I see him. The McDonough product had some stellar moments during the Warhawks special season, and the 6-4 athlete can slash you, shoot it from deep, fly over you in an instant, or beat you with an IQ and craftiness in the 2-guard spot that separates him. No question the WarHawks will be back in the playoff mix in ’22-23 with Gray and the others they have coming back. 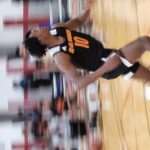 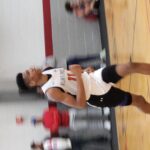 >> It was hard to pick between Roc Lee of Team Huncho and Bryson Tiller of Atlanta Xpress 16U which was having a bigger impact on the game during their fun one vs each other. Tiller is playing up as 2025, and it matters little for the Pace Academy 6-8 forward as he was the best player on the floor for spurts and continues to show the kind of advanced game that will have coaches swarming down to Paces Ferry. He can face you up and drive by you, knock down 3’s at a high rate, or play the big man game on the block with variety and finesse. Lee continues to shine no matter what the uniform, he’s a ferocious competitor out there and is a true bunches scorer who feeds off his own energy to bury opponents. He can go on scoring runs from multiple levels that make him the D1 prospect he has quickly become, and when the energy level is going like it was in a marquee match with Xpress, he challenged Tiller for most-skilled guy out there.