EMERSON, GA –  The US Basketball Games presented by Halftime Sports brought in teams from 12 states to Lake Point Champions Center, and in the HS-age divisions there was no shortage of supreme athleticism and skillset variety.

While OTR didn’t get to see every out-of-state team from across the 2022 to 2025 classifications, below we’re highlighting some top guys from 4 states whose representatives really stood out. 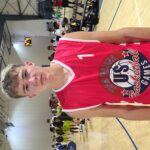 Trent Sisley, 6-4, SF, 2025 >> Among the most highly skilled players at any position or any age group on hand, had a full inside-out package on display with range 3 steps past the arc and an array of moves in closer to the basket that were nearly unguardable, facing up or catching it in close there wasn’t a whole lot of detectable flaws to be frank, a special-looking prospect with some family pedigree as his brother plays at Evansville.

Morez Johnson, Jr, 6-8, PF, 2024 >> Plays his HS ball in Illinois and his AAU outfit is Midwest power Meanstreets EYBL, caught him in Chicago back in April and he was so impressive getting up and down the floor and up above the rim, the often overwhelming offensive package right this second is 10 feet and in or off the break and has room to grow, but the frame and athletic ability are undeniably set for a future at the D1 level.

KJ Windham, 6-1, CG, 2024 >> Johnson’s teammate at Meanstreets I remember him well also as he torched many of the other 2024 guards on hand in what was a deep grassroots field in Chicago, effortless glide to his game but adds an explosion in space that signifies a potentially special future as he can get you at that rim or out past the arc, that smooth left-handed stroke from 3 adds to a guard package that has all the looks of a modern CG with a bright future.

Jacob Gazzo, 6-11, PF, 2023 >> Had some of the weekend’s most dominant scoring performances and it was easy to see why with his advanced post-game and excellent movement at and around the block, there just weren’t too many players of his size and skill there to match what he brings, nice mid-range shooting touch and is a superb shot-blocker with precise timing, already committed to Ole Miss and they’ve locked up a really good one in the SEC.

Josh Hubbard, 5-10, PG, 2023 (pictured above)>> The best PG I saw all weekend and it wasn’t really all that close, effortless scoring ability as his blow-by skill quickly went legendary as you heard oohs and aahs from the sideline of every game he played in, playing with Gazzo was almost unfair as the big guy drew attention for Hubbard’s wizardry or was the beneficiary of some mind-numbing feeds from the lightning-fast sparkplug, a monster stud guard-prospect who had a huge spring/summer for Team Thad EYBL as well. 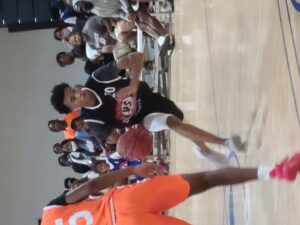 Demondre Graham, 6-3, SG, 2023 >> A testament to the talent on the Mississippi squad that someone as good as Graham had to play 3rd fiddle to the above two, but he was equally dynamic in the 2-spot as he glided and flew his way to conversions from any level he chose, was just a 1/2 step better and smarter than most of the guys I saw him face, on a team that was flying all over the place slamming and jamming (5 guys 6-5 and over) Graham’s basketball acumen is what made him impossible to ignore.

Patrick Wessler, 7-1, C, 2022 >> Can’t teach size and Wessler is much more than just a 7-foot body out there, reminds a bit of Braden Pierce of River Ridge here in GA, he’s perhaps a little further along offensively but not quite the defensive stalwart Pierce is, the feet and hands are exceptional and that’s getting him looks from the highest level (recent visit to Charlotte just before the Games), doesn’t need to step out to 3-point land but did so and that’s an aspect that only intrigues further. 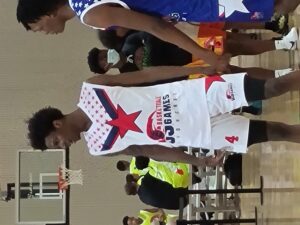 Treyvon Byrd, 6-7, SG, 2022 >> Hardly a more explosive pure athlete on hand that I saw, incredible fluidity of movement as he slid, slithered and high-flew his way to highlight-reel plays, it’s not all just freakish athleticism through and he’s got the defensive chops to be a 2 or 3 and guard both spots at the next level, holds offers from UNCW, Hampton, UMass, EKU and SC State.

Aidan Agnew, 6-4, CG, 2024 >> Agnew stood out as a sophomore on the rise despite my only seeing a small amount of Florida action, handled a lot of point despite being the tallest guy out there in most cases and used his big frame to get into the teeth with power as well as finesse, good instincts and didn’t mind taking his game down the block to attack matchup problems and was pretty proficient on the catch with his back to the basket.

Yasmani Torriente, 6-2, SG, 2022 >> Absurd athlete who put on a dunk display in the warmups of the Showcase Game Saturday, the lift off the deck was eye-popping and had an electricity that particularly as a fast-break finisher alone makes him a D1 prospect, add to that an excellent handle, a good-looking release from range and a nice burst getting through traffic and you’ve got such a special athlete he warrants must-looks from mid-major D1’s at least.