Fort Myers, Fl – The #OTRHoopsReport staff makes Fort Myers, Florida, a staple on our coverage calendar yearly. The collection of 5-star talent gives a great evaluation opportunity, because of the high-profile nature of the tournament. This year we covered the first three days of the tournament, which allowed to see most of the stars in a short amount of time. Here are some thoughts on the stars and other players who are on the rise.

2020 PG Sharife Cooper (McEachern, GA)– It feels like whatever big event we attend, Sharife Cooper seems to standout every single time and that should not be a surprise. The 6-foot-1 point guard earned the 2018 City of Palms MVP honors after averaging 17.5 points per game and leading McEachern to take home the COP title. Sharife is a super smart point guard who knows the game extremely well. He is always at his best in the open floor and is always able to see the play before others. Cooper is an elite floor general and it showed all week long in Fort Myers. Sharife was on another level on the court and mentally during his time in the sunshine state and that is just one reason he received the most valuable player award.

Memphis signee 2019 W DJ Jeffries (Olive Branch, MS)– Memphis signee DJ Jeffries was one of the class of 2019 prospects I loved during his time in the Nike EYBL with Bluff City Legends (TN). His game speaks for itself. The 6-foot-7 wing had a great week in Fort Myers and where he had a fabulous debut on opening day finishing with 38 points and 14 rebounds against Charlotte (FL). He is a solid wing who is a good shooter on the perimeter. Besides his shooting abilities, he is able to crash the boards and is a stellar floor runner on the fast break. Jeffries averaged 26.5 points per game and 9.2 rebounds per game in his four games at the City of Palms Classic. 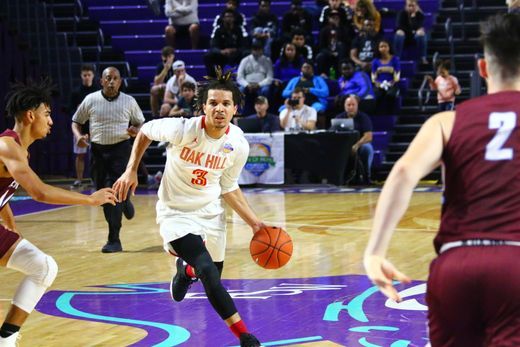 2019 PG Cole Anthony (Oak Hill Academy, VA)– The New York native Cole Anthony went to work this past week at the City of Palms. Even though his Oak Hill (VA) squad came up short of a title, Anthony averaged 25.6 points per game in their three games. The 6-foot-3 point guard is an incredible scorer who is able to score on all levels. Cole can attack and finish at the rim, connect on his mid range jumpers, and also have range from three. Besides his dynamic scoring, Cole is an outstanding rebounder for a point guard and the stats show. He averaged 9.0 rebounds per contest while also dishing out 7.0 assists per game. He is one of the top available prospects in the 2019 class and will be a huge pick up for any program once he commits.

2020 SG Cam Thomas (Oak Hill Academy, VA)– One of the best scorers in this 2020 class is without question Cam Thomas out of Oak Hill Academy, Virginia. The 6-foot-3 shooting guard made that clear all week at the City of Palms Classic. Thomas averaged 23 points per game during his time in Fort Myers. He is a confident scorer who has a sweet shooting stroke and can knock down shots basically from anywhere on the floor. When his opponents closed out on him, Cam was able to still be aggressive and take his man off the dribble for a bucket. He has a high level mentality and his shooting skills will certainly get him far in his career.

Arizona signee 2019 SG Josh Green (IMG Academy, FL)– After having a tough week at the Dallas National Hoopfest, Arizona commit Josh Green got back to being the normal Josh Green most of us know him to be in Fort Myers. Josh is a certain three and d type of player and it shows when he is on the floor. He has great size at the two-guard position and was able to connect on his jumpers from the wing all week long. Green is an active defender with good hands and is arguably at his best when he is in the open floor. The 6-foot-6 senior averaged 19.2 points per game at the City of Palms Classic.