Class of 2016 Ty Jerome of N.Y., is a guard you should know. He will be a perfect fit for coach Tony Bennett’s offense in years to come. Photo cred – Jon Lopez/Nike

Although point guards and post players may get the majority of attention in the recruiting world, having versatile wing play can be just as essential for success on the court. This week we look at several productive prospects who will bring production to the court while playing on the wing.

Jackson embodies the ideal of a versatile wing-forward. He was one of the premier athletes on the EYBL circuit the past two years. He is a constant tip-dunk threat and a tremendous finisher in transition. Standing at 6-foot-6 he has an ideal frame for the wing, but he gets most of his production inside the lane. We watched one of his better performances this year in Minneapolis when he hauled down 20 rebounds while facing off against Miles Bridges and The Family. He finished the circuit averaging 8 points and 7 rebounds per game. His athleticism will translate to production at the next level. Per Rivals.com, Jackson has set visits for Temple (Sept. 11), Missouri (Sept. 18), Boston College (Sept. 25) and Penn State (Oct. 9).

This 6-4 wing brings a completely different skill set to the court than the aforementioned Jackson. His specialty centers around his ability to make shots from the perimeter. As we saw first hand at the NBPA Top 100 Camp in June, Jerome can shoot the ball efficiently from beyond the arc. He finished the circuit averaging 11.7 points per game while shooting over 40% from behind the arc. However, his game is more than just a spot up jump shooter. He can provide secondary ball handling duties and set the offense for his teammates. Jerome is verbally committed to coach Tony Bennett at the University of Virginia. Given his abilities, Jerome projects to be a productive part of Cavalier’s Mover-Blocker offense in years to come.

The 6-5 wing fills the bill of an athletic wing scorer. Left-handed, he is a slasher that can get to the lane with a quick first step. Norvell is best in transition where he can get downhill quickly and finish at the rim as well as any one around. We evaluated Norvell twice this calendar year, first at the Hoop Hall Classic in Springfield, Mass., and most recently on the EYBL circuit in Minneapolis. In both settings Norvell showed a very solid mid-range game, which complements his strength of slashing to the basket. He finished the circuit averaging 14.5 points, 4.5 rebounds and 2.2 steals per game. Per Dan McDonald of Rivals.com, the OTRHoopsReport.com 4-star wing received an offer from Mark Fox and the University of Georgia last week.

Nickelberry at 6-7 is a skilled left handed combination forward that can flat out shoot the ball. He has a pretty stroke and knocks down open threes and mid-range shots off the catch with consistency.

Floyd has good quickness to put the ball on the floor and penetrate to break defensive pressure. He works effectively off the bounce and uses the pull-up jumper in the midrange area of the floor. Floyd has over 20 offers which include Arizona, California, Memphis, Nevada, New Mexico, San Diego State, and UNLV

Okeke is established as one of Georgia’s premier prospects. Standing at 6-7, he has the length and athleticism to defend multiple positions on the floor. In addition, his ball skill allows him to be effective facing the basket. Okeke is currently ranked No. 47 in the BrandonClayScouting.com ELITE 60.

Polite is an active long armed athlete. He attacks the rim in transition and can score over defenders with athletic scoring plays. Grant likes to slash to the basket and shoot floaters in the lane.

Thomas put himself on the map at the #OTRFallShowcase last fall. Standing at 6-7, he has size and strength to affect the game inside and out. This summer he emerged as one of the hot prospects within the state of Georgia. His versatility and play-making ability should be a key asset this year for coach Jesse McMillian at Norcross High School.

Thomas is an athletic forward who is capable of stepping out and making shots from the perimeter. He’s very active on both ends, gets his hands on a lot of balls and will alter shots around the basket. Thomas holds offers from Arkansas, Florida, Iowa State, Memphis, and Mississippi. 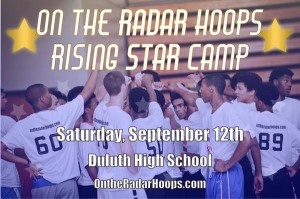