Tampa, Florida – Last weekend in Tampa, teams made their way to Advent Health Fieldhouse to take in the Battle at the Beach. Comprised of plenty of new comers to the OTR platform, it was good to see some new talent and players who now may be OnTheRadar. Here’s my first list of players who I thought were impressive.

Joel Harrison– The 1Family product is becoming one of my favorite players to watch this season on the circuit. He’s been in several big time matchups with high level guards and has given each and every one of them problems on the floor. Playing alongside Jaylen Smith, Harrison handles the ball handling responsibilities with flare, reliability, and shot making. He can create space to get his jumper off from three or get downhill and make plays at the rim. Don’t let his size fool you, he’s only about 5’11 but he will punch it on you in the lane off one or two feet if given the chance. His play propelled 1Family to an undefeated weekend, playing in big games even after injuring his ankle. A recent NM State offer is sure to be followed by more as coaches lay eyes on him in the Summer.

Joel Harrison @j0elharrison have been huge stock risers for 1Family this weekend.

Harrison has been in big matchups with guards this Spring & he’s responded in every game. He just ripped off 28 his last game. @1FamilyHoops @CoachLeeLoper

Michael Powell– Enjoyed watching the high motor PG from Team Tampa this weekend. The 5’8 Powell is a top notch competitor on both ends of the floor and it shows in his play. He speeds up opposing guards defensively and has quick hands for take away steals. In the halfcourt he can set his man up with his dribbles and get to the basket at a good rate for his size.

Kentrell Martin Jr @KJMartinJr is a big wing that has been able to create his own shot consistently. He’s found the driving lanes and a step back jumper at 6’3. @coachjoephilon

Joel So– Joel So is an interesting player with his size and different array of skills he possesses at 6’6. He was a terror in the open floor with his length running defenders down and gathering deflections of passes. His 20 point peformance Saturday was fueled by a never ending motor and defensive prowess. He gets to the rim with a nice handle and burst for a big wing but has to convert at the free throw line at a more efficient clip to take his game to the next level the rest of the coming Summer.

The 6’6 wing man scored on ever level & was very effective in passing lanes turning steals to dunks. Finished with 18 points and at least 5 steals. @FSPHoops

TJ Benson– The 2026 PG from Tri-City Elite had one of the best weekends of any player in attendance. He averaged right at 35 ppg for the Battle at the Beach. After a late start Friday night, he would go on to pour in 38 points and lead his team to the victory. In Jayddence Ford’s absence Benson shouldered the offensive output by himself. He’s super quick with his handle and has a good IQ to get to his pullup and floaters. He can get in players defensively and create easy transition points for himself with his speed, but when the game slows down he can still find a way to get his team a much needed bucket.

Dominic Sanders– Let’s just say it was a good weekend for Dominic Sanders and his Sunshine Elite team in their Ontheradar debut. Sanders led his team to an undefeated weekend behind his leadership and play. Saturday night he started the game off by dunking on top of a defender from the tip for the first play. All weekend he showed his ability to get to the lane whether in transition or in the half court, he was able to get by defenders and make plays at the rim or find his teammates. He can score, but Sanders is a willing passer that finds teammates after he’s drawn a crowd in the lane. The next step is adding the jumper full time & he’ll be a can’t miss prospect for different levels with his size at 6’1 and speed, along with that impressive skillset.

Jackson Roberts– Size and touch are at an all time premium in basketball today and Roberts has both. He’s at 6’9 forward who was good all weekend for his NYC Team Gritty squad. He’s still developing but commands attention in the paint with his rebounding length. Roberts can anchor the lane and be a factor deterring guards from attempting shots in close. I’ll have to continue to watch his development, only a 2024 prospect, but has time to turn into a player coaches will have to see in the coming seasons.

Kale Elmhorst-The Team T-Mac wing showed a little of everything this weekend while at the Battle at the Beach. Elmhorst is about 6’5 maybe 6’6 and brings an all-around skillset to the game. He showed he could be relied upon to handle the ball for spurts, hit the outside jumper, and be a presence in the lane for his undersized squad at times. I was impressed with the many different ways he was impactful for his squad and the different skills he displayed while doing so. 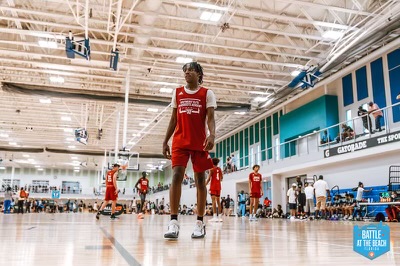 Darius Livingston– As a player who we haven’t seen since his 8th grade year playing in our Battlegrounds, it was good to see both the phsyical growth and skill development from Livingston. He’s grown to be about 5’10 and has the quickness necessary to be an impactful guard. The 2025 PG showed a poise and maturity on the floor on both sides of the ball that put him ahead of most guards. He can read defenders and anticipate moves and crossovers and convert those into explosive layups at the rim. He’s got plenty of time to continue to get bigger and add to his game, but he’s got a good base to start from as a freshman. Running with SE Elite, he’s sure keep trending upward.

Jansey Darani- Every year Game Speed Elite has a players that catch the attention of the OTR staff, this year is no different. Darani was a standout player on their squad with his impact on the court. At 6’7 Darani can play a few different positions throughout the course of the game with strength and body frame. He has next level athleticism and plays above the rim for dunks and lobs in space. Defensively he can guard almost every body on the wing and inside the paint at the forward spot.

Kentrell Martin– Martin is a young wing who showed glimpses of what he could be as a scorer on the wing. He’s got a crafty handle to create separation or blow by defenders on the wing at a legitimate 6’3. He’s got long arms and was solid guarding his position against different types of players. Just a 2025, he will be a prospect I’ll check in on for sure.

Mike Moten-The 2022 PG was the motor for his Team Speights squad. Every game I checked in on him he was doing something good with the basketball or creating defensive havoc with his quickness. Not sure what the future holds for him or if he will go prep, but he could use the extra year of development. He could mature into a suitable guard for schools looking for a competitor and someone who can mix it up off the bounce to get paint touches.

Isaiah Medina– Medina is another young big man, this time for Team Speights. He’s a 2025 playing up 17U and was able to help his squad inside. He altered or blocked shots and looked good around the rim finishing dropoffs from teammates. Medina is young so of course he has to get stronger and add to his game, but the potential is there with his mobility and size at 6’9. 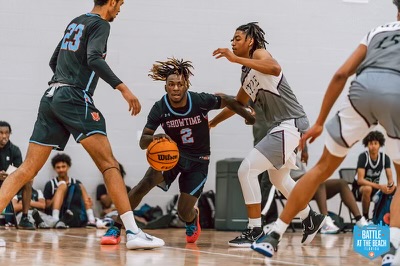 Nassir Griffin– After moving down to Florida from Georgia last Summer, it seems like Griffin has grown as a player and matured. It’s evident in his aggressive style of play on the floor. He smells weak ball handlers and takes advantage of it. He’s always had an impressive handle to get the rim but now he’s strong enough to finish those plays as he did this weekend. He scored through contact at the rim and made teams pay from deep if they left him open. The Showtime Baller PG will be one coaches need to peak at. His competitve fire, vision for teammates, and tenacity on defense alone will gain the attention of coaches.