ATLANTA, GA – Less a road roundup last week as it was a “comfort- of-home” roundup, as circumstances had me on the couch, but the gem that is the NFHS network brought a couple of intriguing games to me.

THE SKINNY: Two of the faster-paced teams in the Metro clashed in a non-region matchup in Suwanee, and the Longhorn guards had a big 2nd half to stave off the Bear equivalents.

MOUNTAIN VIEW NOTES: You’d better have plenty of nitro in reserve when the Bears either come to town or you head to Lawrenceville, as the push factor is a constant put-you-on-your-heels barrage up and back. Love the 2024 group of skilled scorer Mike White, do-it-all fireplug Bronson Blair and shooter Donte Golden, all can hurt you in volume scoring stretches with White and Blair names to know for sure as we near a pivotal travel season for them.

LAMBERT NOTES: For 3 years now 2023 guards Niko Wilson (pictured), Keenan Gagen and James Tyre have put on some entertaining shows, particularly in the cozy confines of their home gym. Some combination of them is at the core of a lot of their wins, and vs an equally pacy MVHS crew Wilson (21p) and Gagen (20p) as usual showed no back down getting up and down the floor and creating and converting chances. With the right playoff draw this Horns team and that pace could be trouble in a monster 7A class, largely in part because the development of freshman big man Will Dopfer is on autopilot to the moon and the 2026 who starred with Redline Athletics this summer has the look of a sure-fire star.

THE SKINNY: 13-1 as of this posting, the Warriors are playing their best basketball in years buoyed by a core of seniors who are finally fulfilling their potential.

NORTH COBB NOTES: Having followed and gotten to know the 2023’s at the core of this Warrior bunch, it was something of a mystery why we hadn’t seen this type of play prior. But the shackles are off a bit, the system is more free-flowing, and the likes of wing Evan Daniel (18p) and athletic guard Damonte Pellot have capitalized, while the style resembles more of what made them successful as a group playing together in travel ball. Fellow 2023 Mekhi Sherman had a big night at Pope as well, and his 3-point shooting takes pressure off PG Jalan Johnson and allows Daniel to use his all-around skillset inside and out. 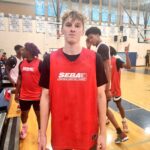 POPE NOTES: No Zach Bleshoy shuffled the lineup some, and losing a ballhandler and floor leader of his caliber would be a tough ask for any program. Senior guard Ryan Luttrell (pictured) continued his strong final season knocking down four 3’s on the day and showed off some of the individual scoring talent he possesses filing some of the Bleshoy void. Senior forward Theron Nixon too has had a solid season playing up front, the defense and shot-blocking in particular are keys to Pope’s chances in a Region where they are unquestionably a threat at full strength to nab the top seed.