Gwinnett, Georgia- The On the Radar Thanksgiving Showcased featured 5 games at Central Gwinnett High School on Wednesday, November 23rd. The ten high schools in competition featured some of the best players in the country from the 2023-2026 class. 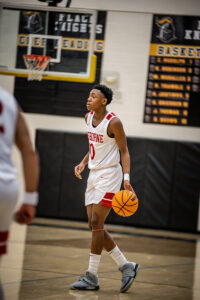 The 6’5″ wing out of Osborne High School, Akai Fleming, is one to keep a close eye on. Fleming does a phenomenal job using his size and length on both ends of the court. Showed he could connect from deep and also does well creating his own shot and hit a couple mid-range jumpers off the bounce. Fleming stays active defensively and makes it hard for the offense to get anywhere around the basket. As his body continues to develop and fill-out, I anticipate he will be a force offensively within 5 feet of the basket. Finished with 16 points in the close loss to Fayette Co. Fleming currently holds offers from Alabama, Cincinnati, Georgia, Indiana, Kansas State, Kennesaw State, and SMU. 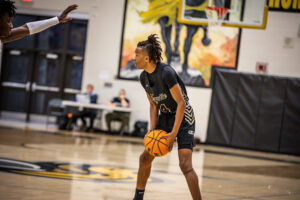 The 6′ point guard out of Fayette Co., Keith Gillespie, had a great shooting performance finishing the game with six three-pointers for 20 points in the win over Osborne. Gillespie has proven he is a knock down shooter with a high release and high shooting percentage. He also showed he could get to the rim quickly and does a great job of locating his teammates for the open basket. Gillespie has a nice feel for a young guard and with the talent alongside him, Fayette Co. will be able to make a lot of noise this season. 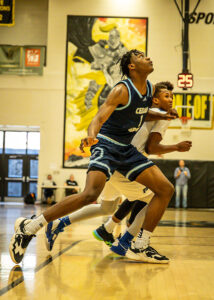 The 6’5″ wing out of Cedar Grove, Emmanuel Green, has an incredibly high ceiling for a freshman. Green has a developed, long frame that really enhances his skillset. As he continues to build strength and improve his game, he will be a tough player to stop inside and off the dribble. Green did a great job staying active defensively and did not give the offense many second chance opportunities. Green’s ability to stay consistent throughout the game and his mature approach to the game will help his recruitment pick up significantly. Green finished with 20 points in the win over Paideia. Green currently holds an offer from Cincinnati. 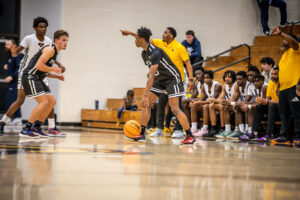 The 6’0 guard out of Walnut Grove, Marcus Smith, has continued to improve his game and does a great job scoring the ball in the open court or finding his teammate for a basket. Smith has very crafty moves and handles, and with his ability to see the floor, always makes the right reads. Smith took over the game completely in the win over Central Gwinnett, finishing with 22 points. 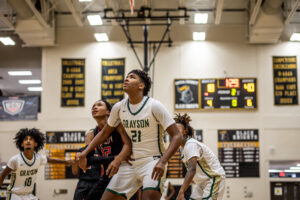 The 6’8″ forward out of Grayson, Amir Taylor, continues to make the game look effortless in his play. Taylor has a natural feel to the game, and with his skillset and frame, is hard to stop around the basket. Taylor has very nice footwork within five feet of the basket and can get to the basket quickly with a drop step or off the dribble. Taylor does well protecting the basket and has great timing for blocks. Taylor finished with 20 points in the win over Tri-Cities, including several blocks and rebounds. Taylor holds offers from Georgia, Kennesaw State, NC A&T, and UNC Greensboro.