POWDER SPRINGS, Georgia, – Every opportunity to play in front of college coaches is a valuable one. The young men who competed at the Sweet 16 tournament last weekend made the most of stage provided for them. Here is a third installment of standouts from my notebook last weekend.

Burnett is a high energy ball handler who specializes on the defensive end of the floor. He can turn up the heat on opposing guards and force them into mistakes. Burnett is also a composed lead guard who is quick to pass and set up his teammates with timely passes. However, when Burnett needs to get buckets, he can. He proved this on Sunday afternoon with a huge 26-point outburst in a win for his Man Up squad.

Christian Burnett @BurnettIce put together a complete game in his last matchup. Was lights out from deep finishing with 26 points and the win. @up2023 @Dre_IsReloaded

Hudson is a well-built wing for a nose for scoring the ball. He had multiple double digit scoring outings last weekend including a 24-point effort on Sunday afternoon. His aggressiveness and touch in traffic make him a difficult cover for opposing defenders. He also possesses a unique combination of strength and agility that allow him to overpower smaller guards and blow past bigger forwards.

Reynolds is a combo guard with nice footwork in the lane. He hit turnarounds in isolation situations and knocked down step back jumpers in traffic. Although he can find his own shot, he is also effective playing the role of a distributor. He can use either hand comfortably to drive or to deliver the ball to his teammates.

It would be hard to find a prospect with a higher athletic ceiling than Leach from last weekend. He has not scratched the top of the potential in his game. However, what he did show was tremendous athleticism and the ability to cover ground on the defensive end. The lanky armed wing can defend multiple positions on the court. Leach is still piecing the offensive tools together, but he did show a soft release from the 3-point line that gives us great hope for his future. 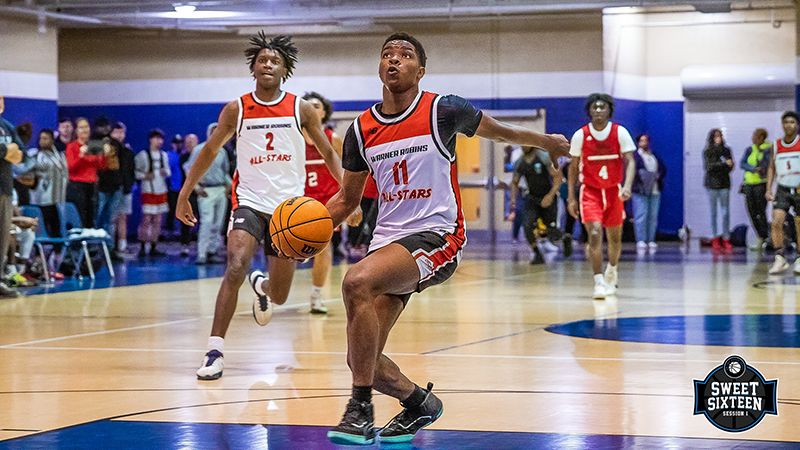 Little is an athletic forward with springs to finish above the rim. He is a threat to catch alley-oop passes in transition. He is equally dangerous when facing up at the top of the key to breakdown his defender and finish at the rim. The 6-foot-4 wing is a prospect on the rise from Middle Georgia.

Our staff tabbed Logan as one of the top unsigned seniors at the event. The lefty-handed wing had his offensive game rolling all weekend long. He hit threes from in transition and knocked down pull-ups coming off ball screens. He is a well-built, 6-3 perimeter player that is poised for bigger things in the future.

Nichols is another left-handed wing with a wealth of upside at the next level. In a game on Sunday morning, he showed everyone exactly what he can do. He has a great frame and athleticism that allows him to accelerate past defenders. Once in the lane he does a terrific job of elevating and using body control to finish around defenders. Also worth noting, Nichols is efficient at the foul line. He gets there often and knocks down a high percentage of those shots.

#OTRSweet16
Shaun Nichols (@shaun2nichols) is an instant bucket getter for @AtlAllStars_.
6-5 lefty is great in transition and can finish in traffic.

Whitney is one of those blue-collar players who is valuable on any roster he finds himself on. He battles for boards on the weakside. On the offensive end he will clean up misses with putbacks while on the defensive end he will start the break with defensive rebounds. Whitney is also one of those players is not afraid of contact. His willingness to root around and get position is a key skill that coaches look to utilize often.