POWDER SPRINGS, Georgia – This is the first installment of Sweet 16 Session II standout performers from Jennifer Brazelton’s notebook. Players from all over the Southeast received the opportunity to show their skills in front of dozens of college coaches all weekend long. Below are names from the classes of 2022, 2023, and 2024 who caught the attention of our evaluators. 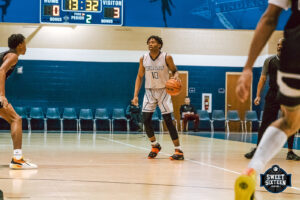 Burnett was a player that caught evaluators attention in the first session and continued to make noise this past weekend. What truly caught my eye was Burnett lighting it up and knocking down 5 3-pointers in the first half against a fundamentally sound Atlanta Timberwolves team. Burnett finished the game with a smooth 32 (6 3PM). Burnett is a fearless, high IQ, lead guard that continually makes plays both offensively and defensively. A fast-paced guard, he’s quick to draw attention, for a multitude of reasons. Has a very nice stroke from deep and finishes smoothly around the rim. Burnett is not afraid on the attack and will spend a quality amount of time at the charity stripe. Burnett also causes havoc on defense with his quick lateral movement and keen sense for the ball. Following his weekend’s performance, Burnett picked up his first D1 offer from Binghamton University. 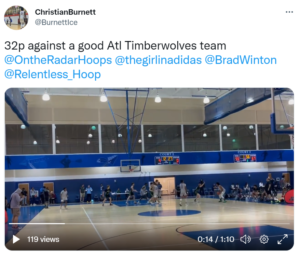 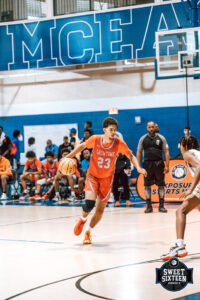 The 6’10” DME Academy shooting guard was lights out again this past weekend at the second session. In the first session, he knocked down 9 3-pointers against a solid AJ Bouye team and this weekend did much of the same, with 7 3-pointers as a game high in the second session.  Doyle is a phenomenal catch and shoot type scorer, and with his 6’10” frame has the versatility to make an impact in other areas of the game. Doyle is a great shot blocker on defense and does well keeping the offense in front of him. Offensively, Doyle is confident in getting to the basket and has a nice pull-up jumper within 10′ of the basket. Regardless of where his defender is, he’s almost impossible to keep contained with his quick first step or utilizing his high release. Doyle recently picked up his first D1 offer from Alabama A&M. 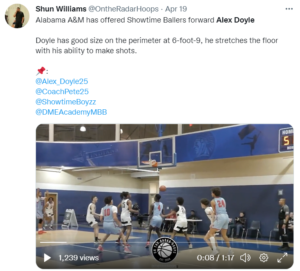 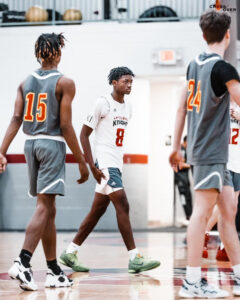 The 6’4″ shooting guard Derrick Odouard averaged 17 ppg during the first Live Period and really turned it up for the second Live Period, averaging 21 ppg. Odouard is a great catch and shoot wing, who also showed glimpses of how smooth he is getting to the basket and finishing around the rim. Odouard really caught my eye against a talented Game Speed Elite team, knocking down 6 3-pointers, finishing the game with a weekend high of 31 points. Odouard is a very impressive prospect and I expect his phone to be buzzing soon from college coaches as his stock continues to rise. 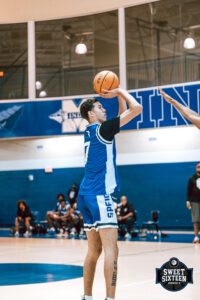 It’s hard not to like the complete game of the 6’9″ shooting guard/small forward, Alex Garcia. The Team Speights wing has one of the smoothest games I saw this past weekend. Garcia can really do it all from blocking shots off the backboard, getting steals, dishing out to teammates, cleaning up missed shots, and finishing at the rim. Garcia has very solid handles for a big and can go the full 90′ while finishing through traffic. Garcia can really stretch the floor, with a very high IQ and high motor, he understands where to be open offensively. I expect his stock to continue to rise as he continues to make waves this summer. 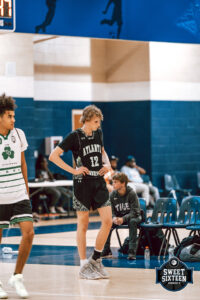 From the outside, the game comes so easily for the 6’5″ shooting guard Will Moore. What truly caught my eye from Moore was his ability to do pretty much whatever he wanted, but still playing within the game. An incredibly athletic prospect that can jump out the gym with his 40″ vertical is fun to watch with his well above the rim dunks. Moore is a great catch and shoot wing, that can also beat you off the dribble. Moore moves very well without the ball and is very good at finding the open teammate with his high basketball IQ. Moore’s offers flooded in following a 31-point game against a talented 1 Family 2023 team, hitting 6 3-pointers and finishing some nice dunks. Following the Sweet 16 Session II Live Period, Moore picked up D1 offers from Alabama, Ohio University, Tennessee Tech, Tulane, and South Alabama. 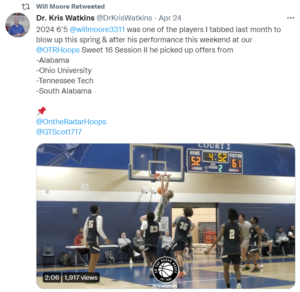