MARIETTA, Georgia, – Day two of the OTR Sweet 16 Session II brought more names to add to our notes. We shifted sites and focus to underclass prospects on Saturday. Most of the prospects below have more than one year of high school eligibility left. See who made an impression below.

Hoffman got our attention with confident ball handling skills. He displayed the poise necessary to run a team and get teammates running the offense effectively. He possesses good size and athleticism for the backcourt position. He hit a game winner on Saturday afternoon proving that he rises to the occasion with timely play making as well. 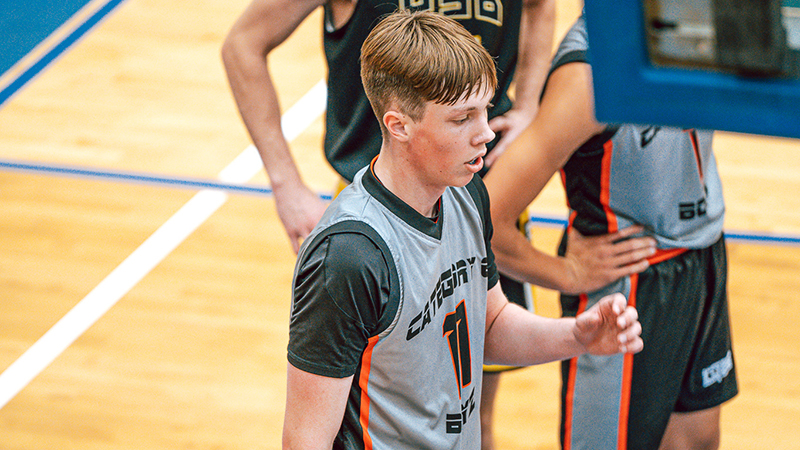 Kearns is a prospect that we expect to hear much more from in upcoming years. He is a 6-foot-7 forward that can play inside and out. He has quick hops to snag rebounds or convert putbacks. He also showed the ability to step out to the top of the key and facilitate the offense at times as well. Kearns game is not a finished product. He still has room to grow physically and confidence to attain in impacting the game. We predict that he will get there in time.

Prophete was one of the most talented players we evaluated on Saturday. He has physical tools that most other players are not blessed with. He can finish highlight dunks in transition, and he can convert long range 3-pointers in the half court. He finished with 20 + points in the win we watched on Saturday afternoon. We predict this is just the beginning for Prophete’s success on the hardwood.

Randolph is a 6-6 wing with versatility. He led the transition break for his team. He also showed range beyond the arc in the half court offense. He showed a consistent release on his 3-point shot in the game we sat in on at Campbell High School. We tabbed Randolph as one of the top wings in the class of 2024 from the event.

Rodriguez looks to be a natural leader on the court. He exudes confidence and poise on either end of the court. His versatility and willingness to play in different positions within the offense is an interesting part of his game. He stands at 6-3 and handles the ball with sureness in the backcourt. He can play make for others or look to get his own shot depending upon the situation. Yet he is willing to mix it up on the interior and scrap for rebounds. This well-rounded skill set is one that will serve him well.

Sarigumta is the lone class of 2023 prospect on this list, but for good reason. He was one of the few pure point guards we evaluated. He runs his team and pushes the tempo at appropriate times. The Florida native is not the biggest nor the most athletic on the court, but he can provide the brains needed for a team to be successful. He is also a player his teammates love to play with, because he delivers the ball quickly and accurately in their shooting pockets.

Out of South Carolina, Smith and his teammates showed up ready to compete at the Sweet 16. Smith headed up a unit of guys that play well together and compete on every possession. He sets the tone from the point guard position. Smith specializes in creating plays out of the ball screen action at the top of the key. He keeps his dribble low and can weave either direction to create a passing lane. Smith can find his own shot when needed, but he does a fine job of delivering the ball to his teammates within the flow of the offense.

Stone is one of many hard-nosed players that suit up for the Timberwolves. What we like about Stone is size, athleticism, and fearlessness that he has while has the ball in his hands. The 6-4 guard gets to the hole and scores consistently on the downhill drive. He is not bothered by contact either. Stone plays aside some other talented players, but he blends in well within the unit of the team. He can act as a facilitator or a get a bucket when needed.