MARIETTA, Georgia, – The OTR Summer Jam was an overwhelming success. Top competition, end to end media coverage, and opportunities for prospects to prove themselves with the July viewing period just a few months away. Here is our final edition of standouts from the event.

Class of 2023 point guard Josh Bell turned heads last weekend with Team Speights Select. The point guard creates space with the ball in his hands and can get his shot in the halfcourt. He brings a cool demeanor with his slick handle. He should be a player to keep tabs on heading into the summer open periods.

Left a defender crossed up then stuck the step back 3. @TMS_AL_SELECT starting to pull away in this one

Class of 2024 guard Trevian Callaway lit up the scoreboard all weekend with All Georgia Elite. He scored 40 in a game on Sunday morning. This was after he scored 26 to start the tournament on Saturday morning. He is a terror in transition as he can lead the break and finish at full speed in the open floor. He was one of the top scorers from the weekend.

Class of 2024 wing-forward Isaiah Evans with The Skill Factory is one of the region’s fastest risers this spring. Per Jamie Shaw of On 3 Recruiting reports that Tennessee and Cincinnati are two schools that prioritizing him the most in recruiting. His length and style of play remind us of Brandon Ingram who was elite prospect that came from the Tar Heel State as well. It is too soon to say whether Evans will reach the heights that Ingram has reached, but Evans is off to a good start.

Class of 2023 Jacob Feagin is a productive prospect with EYA Hoops. The 6-foot-7 forward showed his willingness to clean up the glass and do the dirty work for his team on Sunday afternoon. He found his way into the scorebook as well with several buckets around the bucket. Given his length combined with his ability to defend, he is a kid that provide consistent production along the frontline.

Class of 2023 wing Chase Hill is one of the players in the Metro Atlanta area that you should get to know. Playing with PSB Atlanta, he plays his role and fits in well with the fabric of the team. He handles the ball when needed and will draw the tough assignments defensively. He may not be the leading scorer on his team often, but that never deters him from playing hard and fulfilling his role. There is reason to believe that Hill is just beginning to take the first steps towards stardom at this level and the next.

Class of 2023 Jalen Hilliard had an impressive outing versus The Skill Factory on Sunday afternoon. The Team Forrest wing makes a living at being active and making the right play consistently. He shows mobility and agility when facing bigger defenders. He can also step out to the perimeter and hit jumpers when the defense takes a step back. His 24 points are a good indicator for Hilliard’s trajectory in coming months.

Class of 2023 forward Dennis Scott III is one of the more consistent performers this spring at OTR events. His play with AE5 has been diversified. A few weekends ago he showed his range as a shooter in the trail 4 spot. This time he proved he can still bang around with the big men and anchor the block. His size and strength are to be noted here. Scott is already established as one of the premier prospects in the Southeast region heading into the July recruiting period.

#OTRSummerJam
Dennis Scott III leads the way for a W tonight for @AE5Basketball.

14p tonight and he committed himself to working the glass and the interior in an efficient effort.https://t.co/o9z1G1Ara5 pic.twitter.com/bDa55rowo9 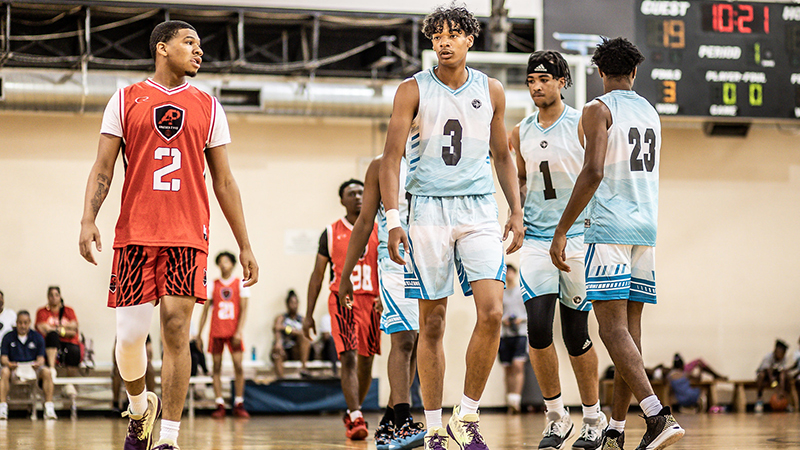 Class of 2024 wing Micah Smith made a debut with his new squad, AE5 Shooters Paradise, last weekend. As there is with any change, there is an adjustment period. However, we see the upside that Smith will bring to this squad. He is a big wing who can act as a primary scorer with the ball in his hands. Yet he has the size to provide defense and rebounding along the frontline. We expect Smith to settle in and have a big summer with AE5. 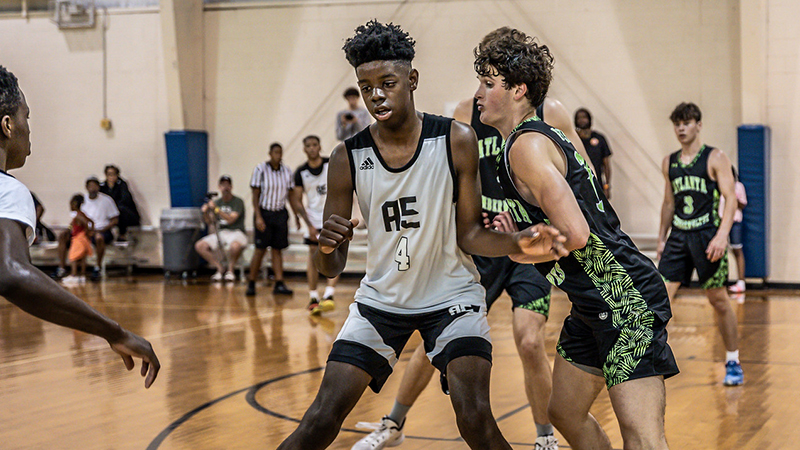 Class of 2025 wing Caleb Wilson is making noise as the city’s top underclassman this spring. The 6-8 prospect backed up the hype by averaging a double-double at the Summer Jam event while playing up on the 17U AE5 team. Wilson proved he can score in several ways including by attacking the lane and getting to the foul line. On the defensive end, Wilson has huge upside as he protects the rim as shot blocker while also being able to defend several perimeter positions.

Class of 2022 forward/center Dadrevius Weathers nearly brought down the basket standard with his thunderous dunks. He recorded double-doubles all weekend with S.M.A.S.H. and put up many highlights. His athleticism is off the charts and is a threat to punch a dunk anytime he is in the painted area. Weathers is one of the top unsigned prospects in the Atlanta area.