Alvin Tumblin made waves this past week with 1 Family.

POWDER SPRINGS, Georgia,– The Covid-19 pandemic created an unprecedented situation in grassroots basketball. As we saw at last week’s Sweet 16 Session II, there are hundreds of talented class of 2021 prospects nationwide that remain unsigned. Typically, the month of April is set for juniors to jump onto the main stage. Yet, because of the lack of turnover and medical exceptions on college rosters, there are many seniors who are still weighing their next level options. Here is a rundown of available seniors that would make a welcome addition to several college programs nationwide.

By: Jonathan Hemingway (Contributing Writer for On the Radar Hoops) 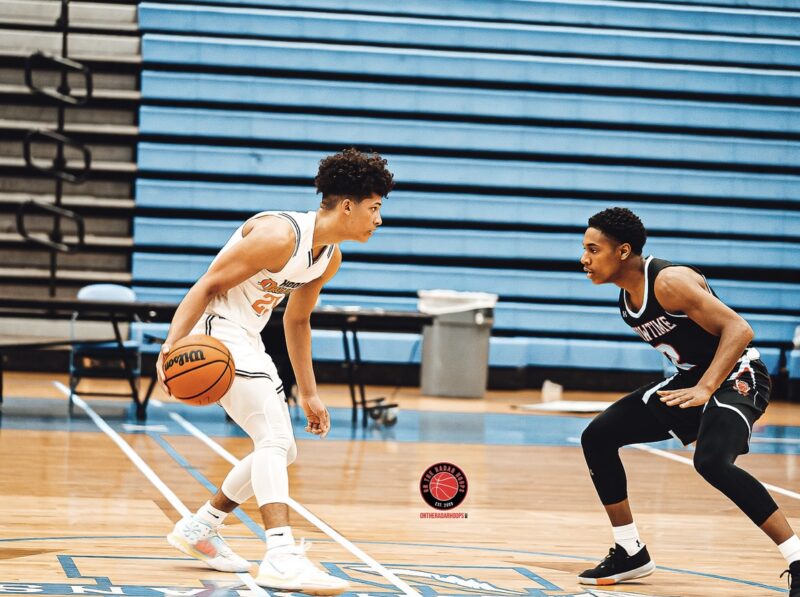 Franklin is a guard that plays with poise and efficiency. In a match-up versus Showtime Ballers on Sunday afternoon, he scored in a variety of ways en route to a 27-point performance. He showed body control and touch when he got into the lane. He also can hit shots from beyond the arc with consistency. The 6-foot prospect looks to be a kid who is ready to contribute at the next level on the day he steps onto campus.

Neal is a confident lead guard capable of scoring or distributing. He had a particularly successful weekend where he scored more than 20 points multiple times including a 32-point outburst versus OTP. The 6-2 prospect is equally effective at setting his teammates up for easy scores. If Neal finds the right college situation to land at, he will have a productive 4 years at the next level.

AJ Neal @AJ_Neal10 finished with 20 points earlier today. Neal made sound decisions with the ball in his hands, either getting down hill to score or making shots around the arc. @ShowtimeBoyzz

We have mentioned Simmons several times on this website and on social media. But his name should not go absent from this write up as he is a player that is ready made for the collegiate level. The 6-7 forward excels in scooping up the weakside rebounds and scoring in traffic. He also has a budding perimeter skill set that should not go unnoticed. Not only can he defend from one end to the other, but he is becoming a threat at the top of the key as a player who can make some plays.

Poyser appears to be a prospect that is just beginning to come into his own as a basketball prospect. The 6-6 forward brings an array of skills to the court. His length and athleticism allow him to impact the game on the interior. He also has a growing amount of ball skill that could land him on the perimeter as a playmaker. Poyser has a frame that should fill out once he gets onto a regular college weight training regimen.

Rembert will make sure you do not overlook him. He is a young man that could be slated as being ‘undersized’ or ‘lacking height.’ However, his game is far from lacking impact. He is continually a pest on the defensive end. His bulldog mentality and competitive spirit frustrate opponents into errors routinely. On the offensive he makes shots and will make plays in transition. Although he played off the ball opposite of Neal (listed above), Rembert should be classified as a point guard and would make most any program better instantly, because of the qualities he brings to a roster.

Tumblin was one of the most promising pure athletes that we evaluated last weekend. The 6-6 wing glides and finishes with flair when in the open court. His near effortless ability to accelerate and elevate immediately caught our attention. He also showed flashes of play creation with the ball in his hands. His quick pull-up jumper from the top of the key showed to us that he has a ceiling to be a primary creator at the collegiate level.