POWDER SPRINGS, Georgia – This is the second installment of Sweet 16 Session II standout performers from Jennifer Brazelton’s notebook. Players from all over the Southeast received the opportunity to show their skills in front of dozens of college coaches all weekend long. Below are names from the classes of 2023 and 2024 who caught the attention of our evaluators. 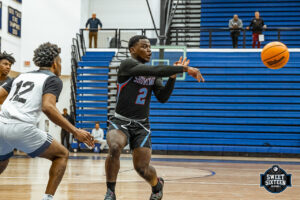 The 6’1″ 2023 point guard, Grace Aluma, has been one of my favorite prospects to watch the last few weekends. Aluma is one of the stockier builds in the class of 2023 and is the backbone of an impressive Showtime Ballers 17U team that went 4-0 this past weekend. Aluma is a true engine that reads the court well, handles the ball under pressure, and makes the extra pass. Despite having some of the best knock down shooters on his team, Aluma still finishes as a top performer for his team consistently in scoring, rebounding, and assists. Aluma also gets it done on the defensive end, making it very difficult for the offense to run the plays and penetrate by getting constant steals and deflections. Aluma is usually one of the first players to dive for a loose ball or be the first to a 50/50 ball. I really like his trajectory as we head into the summer. 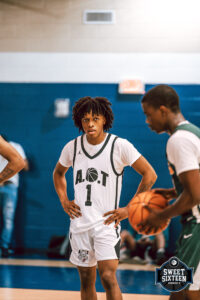 The 6’1″ 2023 guard, Jamichael Davis, is a silent assassin and is consistent across the board every game. Davis has a flashy dunk here and there, but really stays true to his game; being a hardnosed guard, hitting pull up jumpers, feeding the post, and cleaning up the boards offensively. Davis is also not afraid to drive through the lane and finish with contact against the bigs. By far one of the more athletic guards with a very high motor, I expect his game to continue to rise throughout the summer. Davis currently holds offers from Auburn, Kennesaw State, McNeese State, and Voorhees College. 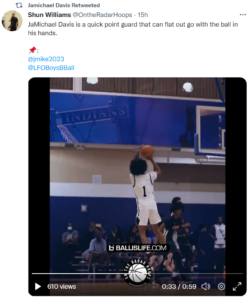 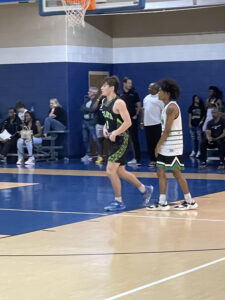 The 6’1″ point guard, Luke Flynn, is every college coaches dream. Flynn plays hard every possession, every game. Flynn is one of the best facilitators in the 2024 class, doing a great job of getting his teammates involved and making the extra pass. Flynn also has a deadly shot from the 3-point line and one of the better pull-up jumpers I’ve seen in his class. With his solid handles, Flynn is also able to fake out defenders with his hesitation and finish in the lane. Flynn currently holds D1 offers from Tennessee Tech and Western Carolina. I expect his list to continue to rise heading into his junior year of high school. 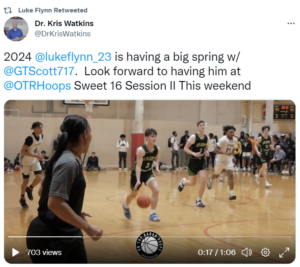 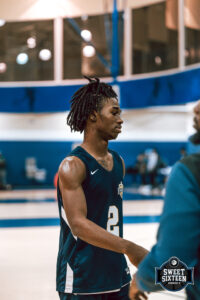 The 6’2″ point guard, Joel Harrison, caught my eye during the first Live Period, and captured the attention of just about everyone this second go round. Harrison is able to do just about everything offensively; handles the ball well under pressure, understands how to draw additional defenders and gets the ball to his open teammates, penetrates the lane and dishes, catch and shoot, and has a nice floater. Harrison has the whole package and one of the most intriguing things about his game is he can go 0 to 60 in a split second. I look forward to watching his game continue to take off. Harrison currently holds D1 offers from New Mexico State and Stetson University. 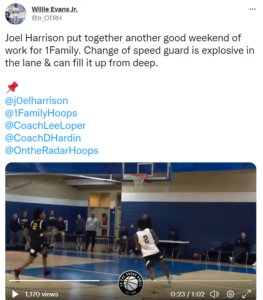 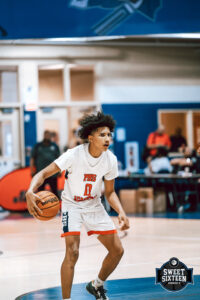 The 6’3″ point guard, Trent Lincoln, is on the verge of a breakout. One of my favorite point guards in the 2023 class, Lincoln is solid with the rock and has an edge to him that makes him fun to watch. Has the ability for some breakaway dunks and can even hit the step back three. Lincoln does a great job of penetrating the lane and getting the ball to his open teammates but can also knock down the 3 from the catch and shoot. I look forward to seeing his stock continue to rise and see the offers flood in. Lincoln currently holds a D1 offer from Alabama A&M, Arkansas Pine Bluff, and New Mexico State. 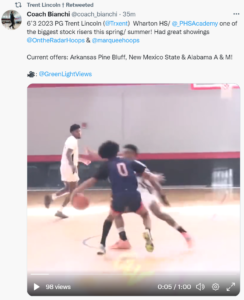