We look here at some of the physical “battlers” of the weekend, those who used brains and braun to get it done closer to the basket (in no particular order). 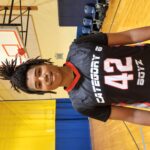 The 2024 playing up was a bull at times on the catch and used his big frame to push folks around, pretty swift for a guy his size both around the basket and getting up and down the floor, excellent rebounder and shot-blocker, some honing of the frame takes him to the next level.

Time in the weight room was obvious for this specimen but it appears to have had no effect on his quickness as he went around and through folks with regularity, could not be denied in close but was equally cat-quick facing up from 15 feet and getting at the rim, stepped out to 3-land a bit as well. 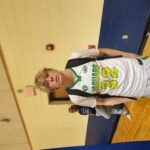 Appears to still be learning the offensive game but his defense as a rim protector was noteworthy, long arms and good timing had him set up as a prime weekend rejector, offensively there’s material there to build on as he got better and better as the weekend progressed catching in tight and going up strong against pretty good size on hand. 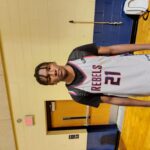 Could have easily joined his mates in the best All-Around grouping but as a battling big man he impressed specifically, using power and finesse he was at times unstoppable within 10 feet with an array of moves and dunks, really good energy as the Rebels will run 98% of the time and share the ball so well, the whole Rebels roster is dotted with guys who bear watching over the next year. 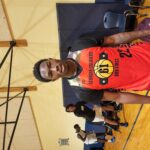 The boys from Statesboro had a good weekend showing both the physical and the slick side of GA-basketball, Jackson was a powerhouse getting downhill as he trucked through defenders who weren’t giving way, with a frame built for pro wrestling he showed off some serious agility around the cup and was off the deck in a flash, pure glass-cleaner. 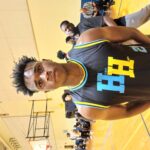 Just plain out-manned guys in junctures where he was pushing people around with a bruising style, the activity at both ends using size and strength was among the better all-around battler packages I saw, he loved getting up and down the floor capitalizing on that hustle to get putbacks and deft feeds from his guards.

Great hands which he utilized to stand out as one of the better pure rebounders I saw, on a team full of star power his motor and effort-level were top notch, plenty of skill to catch and be creative and like so many of the big battlers featured ran the floor knowing he’d get rewarded with putbacks or by guards who would find him. 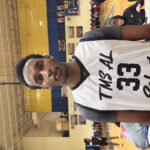 So much to be enamored with for this still-in-progress big battler on the rise, raw is unfair because he doesn’t lumber around by any means, he’s a very good mover particularly on defense where he used good instincts as a shot-blocker, offensively his natural athletic gifts make him a very effective finisher around the basket right now and with homing could be scary, all the tools are there to quickly rack up D1 offers. 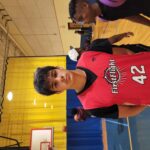 Stretch big showed off better than expected face-up foot speed using the bounce, was really creative with the ball from multiple ranges, superb passer and when he later stepped out for 3-balls it became a more complete package when you add in his notable defense around the basket. 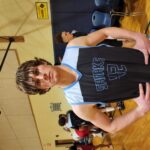 A top shot-blocker on the weekend his timing was precise and his leaping ability and athletic skills were quickly evident, a power-packed build made him a lot to handle either catching it in close or on the offensive boards where he was going to get it if he wanted it, the type of kid who will get even better at the next level and that’s going to be a problem for future opponents. 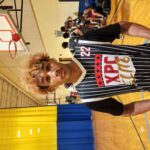 Tremendous motor like all the XPC guys he never stopped going hard on defense or working the boards, dove and scrapped for every ball he could get within reach of and when he got it was strong putting it on the deck or powering up through bodies, as he gets even bigger and stronger the overall skillset evolves to match the motor and he takes another step. 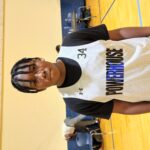 In the last block of the weekend Dubois and his Bulls mates took on top 15U club XPC and put on one of the more entertaining games I saw all weekend, such fight for this battler as he went through and around folks for crafty finishes, having to claw for everything seemed to suit him fine as he matched the high energy of XPC all game, as he matures his body and game there’s a lot to like. 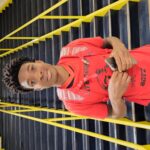 Tough combo of smoothness and power, has a strong safety body but moves like a fleet wide receiver, can absorb contact or slither around you, can guard the whole floor at the 15U level and lead the break or get out to the wing and beat everyone down the floor, high upside possibilities.