ATLANTA, GA – My playoff trips to Atlanta-proper continued earlier this week for the Elite 8, this after a scheduled pop by to Tri-Cities hosting Chapel Hill in 5A was thwarted, as was the subsequent NFHS backup plan.

So we caught a terrific Norcross at North Gwinnett 7A game on NFHS, and then hit the Emory-area for Druid Hills hosting McDonough in one of the best atmospheres I’ve seen in my 3 years on the trail. 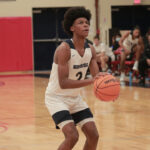 BLUE DEVILS NOTES: From the moment Johnson came down to Atlanta from North Carolina, it’s only been a matter of time before his considerable skills and pure influence as a lead guard asserted itself when it mattered most. The 2023 star was clutch in the final period with 9 of his 16 points, including 4 for 4 from the stripe. Not to be overlooked was Hezekiah Flagg’s monster 1st qtr, where he scored all of his 12 points and put NG in an immediate hole they ultimately were not able to dig out of.

BULLDOGS NOTES: The truly exceptional career of RJ Godfrey came to an end before the Clemson-bound senior could be the one to lead this consistently-strong program to that title banner. But that takes nothing away from Godfrey or the rest of his mates, as this was a tight game following that opening burst by Norcross, and under one of the better coaches in the ATL-Metro in Matt Garner this team even with Region realignment will surely remain a power and yearly contender for 7A supremacy.

NEXT FOR NORCROSS: 7A semifinals Saturday vs Newton at Buford Arena 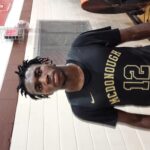 WARHAWKS NOTES: Gray burst onto the scene both last spring and this fall on the Showcase scene as a 2024 to watch, and after seeing him Wednesday night he’s not just one to watch but one that deserves a spot in the top 10. He was explosive and impressive from multiple ranges, and even a defensive team as good as Druid Hills had no answer in what was low-scoring grinder’s game. The online dogging of McDonough is a joke, this is a really good team with a bunch of guys who can play and go really hard. Avante Nichols (11 pts) too was an absolute beast all game, while most coaches would love to go to war with the backcourt combo of Amon McDowell and Daavion Thomas.

RED DEVILS NOTES: When I saw Druid Hills at TOC they really impressed with their team defense and sharing of the ball. The athletes of McDonough are at such a high-level, so even a team as well-drilled as the Red Devils couldn’t match the relentless nature of the personnel differences. Keshawn Evans (12 pts) was a warrior going against constant contact, but there just wasn’t enough space for guards Harry Gewirtz and Karon Strickland to do their thing. Still, their 25 wins are totally legit, and I’d expect this program to right back here next year even with the 3 aforementioned stars graduating.

NEXT FOR MCDONOUGH: A second straight final four appearance this one Friday against Westover (Albany) at Fort Valley State.