BUFORD, GA – Got the buggy rolling to Buford Arena for day one of two semifinal days there featuring 7A and A-Private Friday. 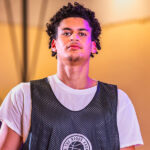 EAGLES NOTES: So much is naturally made of the incredible size for Greenforest, and it makes their zone college-level when two 7-footers and Jaylen Peterson at 6-7 patrol the back. But the key to this team to me is Tenebay, a seriously underrated big guard at 6-5 who can shoot it from multiple ranges, handle the ball when needed, and can guard inside and out with a stout frame. When the team needs a bucket, it seems to find him more often than not, even with another terrific talent in the backcourt with him in Jalen Forrest. With the kind of overall defense both full and halfcourt they showed vs Heritage and the shotmaking ability from their guards, this team is the undisputed class of the division as it’s been all season.

HAWKS NOTES: It’s a tall task for any team without two 7-footers of their own to match the kind of length they will see when facing the Eagles, and that was simply the case with Heritage. That combo of pure arm span and well-drilled full-court pressure suffocated the outstanding guard tandem of Shaun Nichols (16 pts) and rising 2024 Max Skidmore, and didn’t leave much in the way of easy, scrap-baskets for others either. Great stuff for this program to show great resolve reaching a Final Four, adding to the list of schools from the south side who made their presence felt in this playoffs.

NEXT FOR GREENFOREST: King’s Ridge down in Macon Saturday for the A-Private title 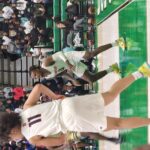 PATRIOTS NOTES: Could have been Malique Ewin as POG as well, as he and Rideout both were clutch in key spots and showed off the kind of senior mettle you expect and need in a playoff contender. The team went 9 of 10 at the line in the 4Q, a stanza Ole Miss-commit Ewin had 10 of his 20 pts and Rideout 8. The unsigned Rideout remains one of the top 2022 guards still available in the GA market, something of a puzzling thing considering he’s made big shots and come up with big plays for most of the last 3 seasons.

FALCONS NOTES: This setback doesn’t take away from a tremendous season for PBrook, they ran into a team that had a return trip to the 7A finals and a championship they narrowly issued a year ago squarely on their minds, and their stellar play at both ends showed it. These Falcons say goodbye to another cast of terrific seniors led by Kami Young, Andre Young, Nile Hillmon, Jordan Brown and Jaylen Perry (after 5 big names left after last year’s 25-4 squad), but as we know this is a yearly power under Coach George Washington and they can build around Jaiun Simon, Xavier Bell and Chris Hickman among others for ‘22-23.

NEXT FOR BERKMAR: Norcross down in Macon Saturday for the 7A title